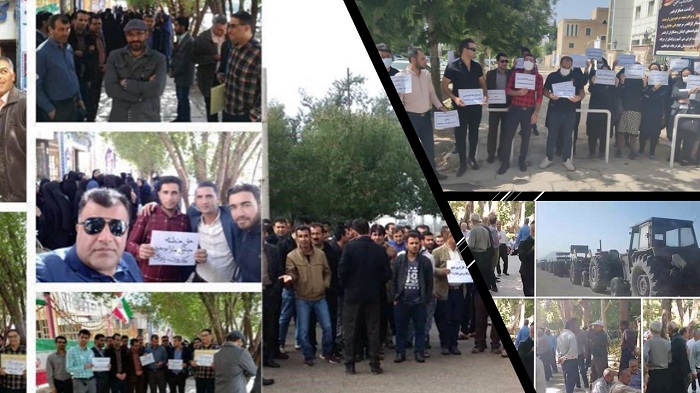 Supporters of the (PMOI / MEK Iran) Reports from Iran indicate that there have been many protests in cities across the country. People from different social backgrounds are joining together and making their opposition to the regime heard.

In the city of Isfahan in the central part of the country, farmers held a rally outside the provincial governor’s office on Tuesday 9th June. The reason for this gathering was to voice their opposition to the regime’s policies that have seen local river waters rerouted away from their land towards projects that the regime is working on. Many farmers turned up to the protests in tractors. Protests for the same reason were also held in the town of Qahderijan.

Incoming reports from cities throughout #Iran indicate people from all walks of life are holding protest rallies and raising specific issues along with demands from the ruling mullahs’ regime.#IranProtestshttps://t.co/DL62FSmEtT

Workers from the Abadan refinery protested on Monday 8th June. They were bringing up issues surrounding their salaries and pensions that have not been paid for quite a while, or have been paid with very long delays. One of the municipal workers that were protesting said that the managers are making profits off the back of the workers. The workers have been asked to sign new contracts – ones that are far more beneficial for the employers rather than the workers. He described the contacts as “white documents” and said that the workers have refused to sign them, which has resulted in the workers being refused entry to the refinery, hence the protests.

#PMOI #MEK sources inside #Iran report that people across Iran have held protests over the past week. Protesters are raising long-standing grievances with the regime in a resurgence of the Resistance began in 2017.https://t.co/oovKKOKQmV #IRGCTerrorWithoutBorders @USAdarFarsi pic.twitter.com/0cyefKPPWd

On Saturday 6th June, nurses gathered outside the governor’s office in East Azerbaijan Province. The nurses work in private facilities in the city of Tabriz and they were protesting against the very low wages that they receive. They also said that they are not satisfied that they have been put onto part-time contracts. One of the people protesting outside the governor’s office said that they are working as a nursing assistant and have a very low monthly wage considering their formal academic training. She said that many qualified nurses are having to accept work as assistants because of a lack of jobs.

Another group of people that have been protesting is people who have made investments with the Iranian regime’s Caspian Credit Firm. Many Iranians have lost a lot of money after making investments with firms like this that are associated with the notorious Islamic Revolutionary Guard Corps (IRGC). These organizations are responsible for shameful banking and financial crimes.

The people of Iran are determined that the regime is not going to get away with it anymore. The people want to see the regime collapse so that they can move forwards to a more positive, equal, and democratic Iran where their human rights will be respected.

The momentum of dissent is continuing with these protests, as are the activities being carried out by the MEK Resistance Units. The regime is worried about these bursts of activity across the country because of the explosive state of society. Just like the November 2019 uprising, one minor grievance will give way to a massive uprising, so the regime is nervous.