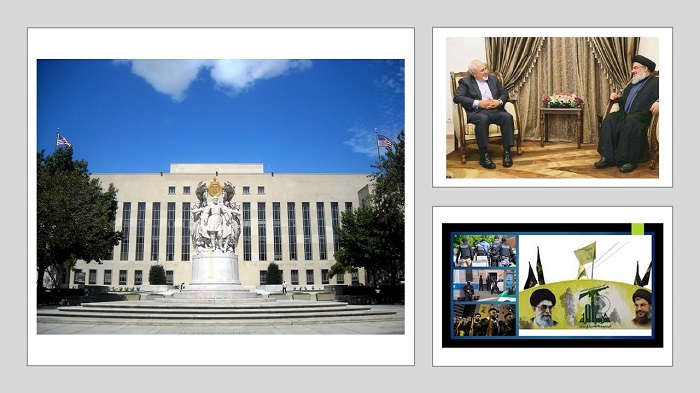 In an article published in The Cipher Breig, discussed the Iranian regime and Hezbollah’s Pre-Operational Modus Operandi in the West. The article written jointly by Mitchell D. Silber, former Director of Intelligence, NYPD and Ioan Pop, Former Senior Intelligence Analyst, NYPD Analysis writes, since 2018 there has been a rise in tension between the United States and Iran/Hezbollah after the U.S. administration decided to withdraw from the 2015 nuclear deal. The tension was particularly noticeable in January 2020 when the U.S. killed Qassem Soleimani, Iran’s IRGC-Quds Force leader.

In recent years there has been more evidence that Iran and Hezbollah have been trying to initiate an underground network in the U.S. and Western Europe, which at any time could be galvanized to launch retaliatory attacks. This paper evaluates Iran’s and Hezbollah’s potential operations in the West which has been sourced from court documents and reports of recent arrests of Hezbollah and Iranian agents in the U.S. and abroad. It reveals the recruitment, training, and the placement of these agents and their involvement in previous operations. While it is impossible to predict when, where or how Iran/Hezbollah might retaliate for Soleimani’s killing, this article suggests that there is an increase in the warning signs, indicating a possible attack in the U.S., or against U.S. interests abroad.

Tensions between the U. S. and Iran have been on the rise since 2018 when the U.S. administration decided to withdraw from the 2015 nuclear deal and as a result, re-established its sanctions on Iran. In response to this, Iran and its proxies have been putting pressure on the United States.

The death of the IRGC-Quds Force leader, Iranian General Qassem Soleimani, in January 2020 has shown how this escalation by the United States, could bring about Iranian retaliation against U.S. interests.

There is a high chance following a ten-year increase in Iranian and Lebanese Hezbollah activities in both Western Europe and the U.S. of future attacks taking place on U.S. interests overseas and within the country.  There are seven observations of present activities that suggest Iran and Hezbollah are planning a terrorist attack. These are:

The new leader of the IRGC-Quds Force, Esmail Qaani, has suggested that there will be retaliation against the death of Soleimani on January 3rd, 2020 by a U.S. drone. Other Iranian leaders have also suggested that retaliation is possible, which includes Ayatollah Ali Khamenei and Hassan Nasrallah, the Secretary-General of Hezbollah, who has called on Hezbollah global operations to retaliate.

The author of this article spent time in the NYPD Intelligence Division (2005-2015), where the threat from Iran and Hezbollah was often mentioned, particularly towards New York City. But now, with the death of Qassem Soleimani, it has been suggested that there is a greater chance that retaliation will take place.  The action could be similar to the assassinations of Hezbollah leaders, Abbas Musawi in 1992 and Imad Mugniyah, in 2008, even though it is unlikely to be so extreme that the Iranian regime will be threatened as a result.  Also, due to COVID-19 in Iran, this is likely to postpone Iranian plans for retaliation.

Iran provides up to an estimated $200-700 million annually to Hezbollah. They also engage in joint terrorist attacks throughout the world. Two well know co-operative attacks took place in Buenos Aires in 1992 and 1994 which targeted the Israeli Embassy and a Jewish cultural center. There is allegedly some proof that Iran and Hezbollah have a dormant network in several countries which is ready to launch attacks if required.

There was a failed 2011 Iran-directed plan to target the Saudi Ambassador in Washington, which even though it did not happen there are it seems dormant cells in the U.S. ready to go into serious action if required. U.S. officials are seemingly fully aware of the potential of Iran and Hezbollah to wage attacks in their country.

There is this overall feeling that a lot of thought would have to go into waging any attacks on the U.S. However since the unexpected death of Soleimani there is some fear that Hezbollah with Iran may be closer to orchestrating a terrorist attack than was originally thought.

There have been several incidents in recent years involving the NYPD which has uncovered activities in the city that have involved possible preparedness for terrorist attacks such as spotting a group of Iranians photographing subway tracks in 2003. In fact, between 2002 and 2010, the NYPD and federal authorities detected no fewer than six events that involved Iranian diplomatic personnel.

“… measures could have led to assassinations, kidnappings and/or a terrorist attack, a hallmark of the Iranian regime’s terrorist plots abroad through the past four decades.”#Iranhttps://t.co/7pePozmM4k

Also, in November 2019, two men—Ahmadreza Mohammadi-Doostdar, a dual U.S.-Iranian citizen and Majid Ghorbani, an Iranian citizen residing in California-pleaded guilty for pretending to be illegal agents for the Iranian government and were charged with spying on two Jewish concerns in Chicago and also U.S. members of the exiled Iranian opposition group, Mujahideen-e-Khalq (PMOI/MEK), which has persistently advocated a change to suit all walks of life in Iran. They were serious about their intentions, as they were caught in the act of photographing the front and rear of the Rohr Chabad Jewish Center, and the iron fence which surrounds the building.

According to Israeli newspaper reports, the German security forces have conducted raids at several locations throughout Germany as they try to apprehend alleged members of Iran’s Islamic Revolutionary Guard Corps – Quds Force for spying on Jewish and Israeli locations. There has only been one prosecution in Germany in 2017 and that was of a Pakistani citizen, Haidar Syed-Naqvi, for being paid by the Quds Force to investigate potential targets of Jewish and Israeli individuals and institutions.

Two Lebanese expatriates, Ali Mohammed Kourani aged 32, and Samer El Debek aged 37, were arrested for taking part in intelligence gathering for their Beirut based superiors. Ali Kourani was sentenced to 40 years in prison for “covert terrorist activities on behalf of Hezbollah’s Islamic Jihad Organization.” Samer El Debek’s case is still pending in courts. Kourani was allegedly conducting surveillance of U.S. military and intelligence outposts in New York City, as well as airports in New York City which were undertaken to prepare for attacks by Hezbollah’s Islamic Jihad Organization. One of the targets was supposedly taken from one of the following:

Kourani videotaped activity around at these targets by using his phone and transferred the video footage to a memory card which ended up with his Lebanese-based superior. Kourani, as well as being told to target U.S. airports, had Toronto’s Pearson International Airport on the list which he visited seven times.

The main focus of Kourani’s surveillance was on the following:

He also quietly asked airport personnel questions about some of the airport’s facilities in anticipation of getting terrorists and their weapons into the country.

For Samer El Debek he not only investigated potential terrorist targets in the U.S. but he extended this to Panama where he allegedly was asked to find the U.S. and Israeli embassies and also identify security measures at both the Canal and the Israeli Embassy and to find places where goods like acetone and battery acid could be bought which both have explosive properties.

Alexei Saab, 42, another Hezbollah recruit, was arrested in September 2019 for providing Hezbollah with photos of key targets in the New York City area, including the following:

Saab joined Hezbollah in Beirut in 1996 when he was a student according to the Department of Justice. He was taught to specialize in photography both video and stills and to conceal the fact he was photographing potential terrorist targets. He also analyzed potential targets by suggesting where an explosive device should be placed and the amount of damage an explosive would cause. NYC wasn’t his only target, but in Boston, he collected information about Quincy Market, the Prudential Center, and Fenway Park as potential targets and, in D.C., the Capitol Building and the White House. He hasn’t yet been prosecuted for this role he played.