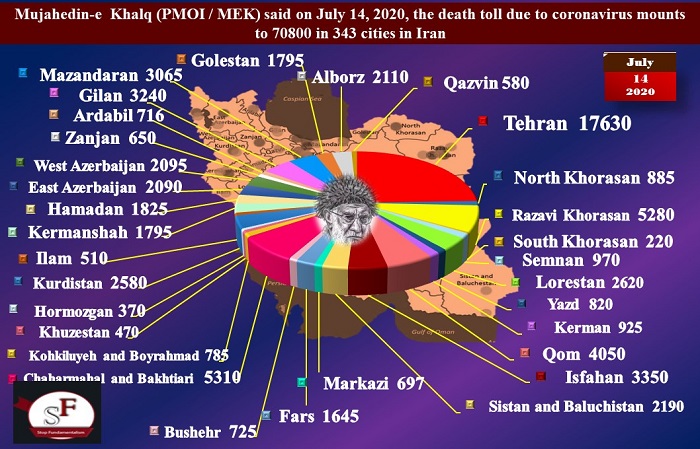 The People’s Mojahedin Organization of Iran (PMOI / MEK Iran) announced on, July 14, 2020, that the Covid-19 death toll in Iran is more than 70,800. This is not surprising given the regime’s cover-up of the scale of the problem, which was designed to shield their inaction from reproach.

At the same time, the regime has been attempting to divert attention from the people’s legitimate demand for regime change made most recently in nationwide protests in January. The regime wants to ensure its survival after all, which is why they played down the pandemic in February to ensure a good turnout at its sham election and why the mullahs keep claiming that the crisis is over, even though there’s an extreme amount of evidence to the contrary.

A state-run paper in Iran ran a story saying that the mullahs are using the coronavirus as a method of oppression to control the people by keeping their attention focused on the rising death toll. Simply, the regime would rather let its people die, than set its people free, so they are intentionally mismanaging the crisis to ensure that an uprising will not occur.

The state-run Mostaghel daily wrote: “A savior was needed to divert people’s attention from the November [protest over the gas price hike] and January incidents. So, came the novel coronavirus. The government used people’s fear of this invisible enemy to unleash the dragon among them. Long before its public announcement, COVID-19 had come or had been brought to Iran. But to defy Trump, they held events marking the 41st anniversary of the 1979 revolution. And to slap those dissatisfied with the approbative supervision, the Parliamentary elections were held as scheduled. Then they said: we just found about the virus’ existence, so people watch yourselves.”

The paper explained that to the regime, the Coronavirus was “a gift from heaven”, and that the regime refused to follow basic virus management policies and instead advised prayer, violet oil, and camel urine. The regime “asked” people to stay home, even though they had not closed the stores and were not giving people money to get food. No wonder the medical services were overwhelmed.

More than 70,800 people have died of the novel #coronavirus in 343 cities checkered across all of Iran’s 31 provinces, according to the Iranian opposition PMOI/MEK.

Mostaghel warned that coronavirus would someday end and then the people will have nothing left to lose, so they will come out in their hundreds of thousands to protest.

The paper wrote: “This nation will not forget how it was abandoned during these bitter days. This will affect the upcoming incidents.  Because soon, people will come to their table for eating, and their despair of an empty table will lead them to protest on busy streets.”

Mrs. Maryam Rajavi is the President-elect of the National Council of Resistance of Iran’s (NCRI), reiterated that now everyone can see that because of the inhuman policies of Khamenei and Rouhani, Coronavirus in burning the entire country and taking lives.