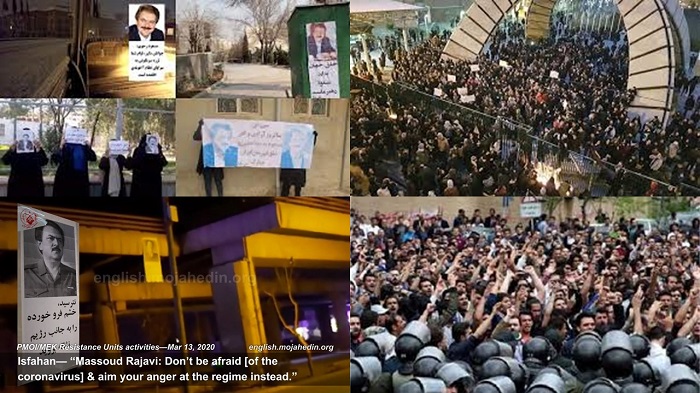 The people of Iran have been holding regular strikes, protests and anti-government demonstrations for years. Over the past few years, these have intensified, sometimes into very significant uprisings. The people of Iran are calling for regime change as they know this is the only solution if they are ever to experience true freedom, democracy, and human rights.

The people are supported and led by the People’s Mojahedin Organization of Iran (PMOI / MEK) – the main opposition to the Iranian regime.

Over the past couple of months, we have seen the Iranian regime deceive the people of Iran, and the international community, with regards to the Coronavirus outbreak. More than 41,000 people have died across the country according to the PMOI / MEK that has been liaising with health professionals and front line workers in every province of Iran.

The Epidemiology Committee of the #Iranian Ministry of Health has announced that in eight provinces, an upward trend has been noticed, or the beginning stages of a peak.https://t.co/s3LFSa4TrB#Iran #MEK #COVIDー19 #coronavirus @USAdarFarsi pic.twitter.com/m4vSoRo7rG

However, the Iranian regime is reporting that less than 7,000 people have died after contracting COVID-19. The regime is trying to downplay the extent of the tragedy, but nurses and doctors across the country have resisted the regime’s attempts to silence them on the reality of the health crisis. The regime has said that there are plenty of beds available in intensive care units, but those working in hospitals are saying this is far from being the truth – they have been working over capacity for quite some time.

Adding to the regime’s lies and deceptions are a series of actions that are contributing to this rising death toll. Firstly, the decision to send people back to work has been catastrophic. Not only does it show that the regime has no regard for the health and safety of its citizens, but it also proves that the mullahs leading the country are only concerned about their economic interests.

And another terrible decision has been the reopening of religious sites. Scientific and medical experts warned that this would result in a huge rise in the number of people infected with COVID-19, but the regime disregarded this advice. Not only do religious sites bring in a lot of revenue for the regime, but the regime also uses them as part of its propaganda machine. Sermons are used to influence the people and to push the regime’s policies.

Resistance Units continue to send message of hope and revolt across #Iranhttps://t.co/WHn5kB7BeD

The MEK has Resistance Units across the country and they have been very active in recent times. They represent the people’s desire for regime change and they have been making sure that their voice has not been drowned out by recent events.

Members of Resistance Units have been graffitiing messages of support for the leaders of the Iranian Resistance in cities across the country. Young people have also been taking to the streets, rebelling against the regime and its destructive policies.