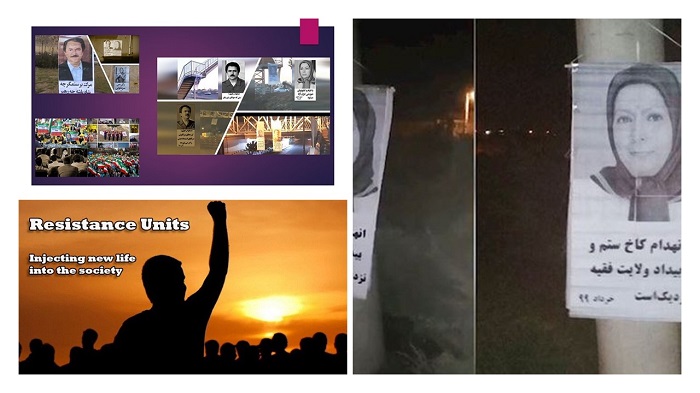 The People’s Mojahedin Organization of Iran (PMOI / MEK Iran), the main opposition to the Iranian regime, has been working towards freedom, democracy, and the respect of human rights for decades. It is a major support to the people and provides the vital support that the people need.

The internal network of the People’s Mojahedin Organization of Iran (PMOI/MEK), known as the Iranian Resistance Units, continued its activities across the country from Saturday, June 13, to Tuesday, June 16.#Iranhttps://t.co/AHPdZCnD6j

In the past few days, the MEK Resistance Units have set up several activities in many different cities.

Young and defiant Iranians have also been out on the streets, making their opposition heard. Two Basij bases were set on fire in the Semnan province in the town of Ivanaki. The Basij force is a symbol of the regime’s oppression. It is a branch of the notorious Islamic Revolutionary Guard Corps (IRGC) and it is tasked with pushing back against protesters and demonstrators. During the November 2019 uprising, its brutality and violence caused great bloodshed.

In the cities of Arak, Rasht, Hamadan, Sabzevar, and Amol, young people put up banners and images of founder Ruhollah Khomeini and current Supreme Leader Ali Khamenei. They then proceeded to burn these images, making it very clear that they are despised by the people of Iran.

In many major cities across Iran, including the capital city, Tehran, Yazd, Ahvaz, Qom, Mashhad, Isfahan, Shiraz, and many more, Resistance Units and supporters of the Resistance took part in several activities in which the aim was to make their desire for regime change known. They declared their support for the President-elect of the National Council of Resistance of Iran (NCRI) and their hatred of the regime that has destroyed their lives for many years.

They graffitied slogans in numerous cities, some of them reading messages such as the following: “Viva Rajavi, down with Khamenei”, “We will take back Iran”, “Democracy with Maryam Rajavi”, “The mullahs’ rule must end”, “The overthrow of the Supreme Leader’s rule is near”, and “We must keep the flames of freedom and hope alive across Iran”.

#MEK Resistance Units have been putting up banners and posters across numerous cities in #Iran Many of them are messages of support for the leader of the MEK, Massoud Rajavi, and #Maryam_Rajavihttps://t.co/sgJ7njmwzu #IRGCTerrorWithoutBorders #Iranian #coronavirus @USAdarFarsi pic.twitter.com/Kn9NWTvaY5

The Coronavirus health crisis is causing turmoil for the people – even more than usual. They are watching the country’s leadership make very bad decisions – ones that make the people extremely vulnerable.

Many experts are warning that the second wave of COVID-19 is inevitable, with some saying that it has already started. Iranian President Hassan Rouhani has failed to be honest with the people of Iran, and the international community and this has resulted in the outbreak spiraling out of control. As the Resistance Units and supporters of the (PMOI / MEK Iran) have been saying, the Iranian regime is the “real virus” in Iran – the one that has been causing the most damage.

The regime’s rule is coming to an end. It cannot survive much longer. The only certainty, however, is that the people will be the force behind the regime’s collapse.