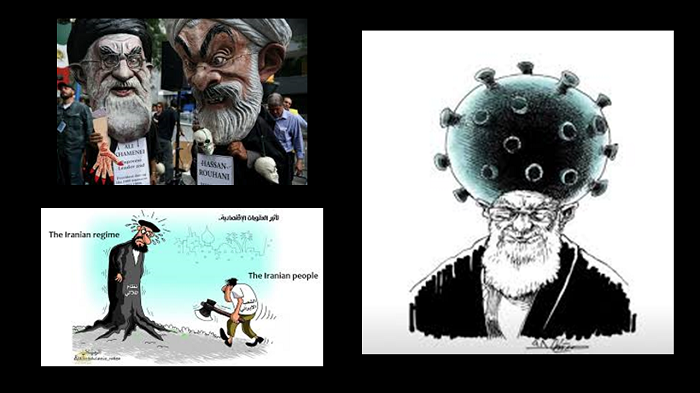 Since the beginning of the Coronavirus outbreak, the leadership in Iran has appeared to be unsympathetic to the people of Iran who are suffering from the most devastating consequences. Like countries all over the world, Iran has been battling with this novel virus and the impact has been felt by the majority. However, in speeches by Supreme Leader Ali Khamenei and President Hassan Rouhani, the economic impact has been discussed, but not the humanitarian side of it.

The People’s Mojahedin Organization of Iran (PMOI / MEK Iran) announced on Saturday, May 16, 2020, that the Coronavirus death toll in 318 cities in Iran has exceeded 42,100.

Families across Iran have lost their loved ones and often the main breadwinners of their household. People have lost dear family members and friends, with many losing more than one person in their family. Many have watched others die, scared, and alone. The lack of compassion on the part of the regime has been astounding.

The main opposition to the Iranian regime, the People’s Mojahedin Organization of Iran (PMOI / MEK), has been monitoring the situation and it has reported that more than 1200 Iranians have died, with the number increasing all the time.

In speeches since the beginning of the outbreak, leaders in Iran have been talking about how well the country has been dealing with the outbreak – deceiving the people of Iran and the international community. They have tried to downplay the crisis and discredit those that are saying otherwise, including doctors, nurses, medical workers, and scientific or medical experts.

However, in a change of attitude, the Supreme Leader recently admitted that the situation is very serious. On Sunday 10th May, the Supreme Leader participated in the Coronavirus Task Force committee meeting via video link. He said that his hope is for the young scientists of the country to work on a vaccine that will bring an end to this virus (not mentioning the regime’s failed attempts to hack information from research labs and scientific institutions across the world).

There was criticism in Iran when President Rouhani announced that religious sites would be reopening. Experts warned that reopening religious sites would do nothing more than guarantee a spike in infections and further deaths. However, the decision to ignore this advice was made. The Supreme Leader’s only comment on this was to say that there would be an investigation by those that “understand the truth and the necessity of prayer”. Instead of a decision based on religious grounds, it would be more beneficial for all involved to consult medical and scientific experts.

The reopening of religious sites is something that will bring in funds for the Iranian regime. It is also a way for the regime to spread its propaganda and influence the people of Iran through sermons.

Despite acknowledging that the situation is more serious than he has previously admitted, the Supreme Leader also took the occasion to make it known that the vast resources available to the regime will not be used to help the people. Instead, people will have to rely on popular efforts.

And despite acknowledging that the crisis is hard on the people of Iran, he also made it clear, without explicitly saying it, that the regime has managed to avoid an uprising during the current crisis.

However, an uprising is unavoidable because the people are determined to see the regime collapse and they are not going to let the regime’s mismanagement pass quietly.

The PMOI / MEK Iran and the National Council of Resistance of Iran (NCRI) have taken great efforts to help the people of Iran that have been left extremely vulnerable by the government. These organizations have been supporting the people of Iran for decades and their widespread popularity across the country is growing.