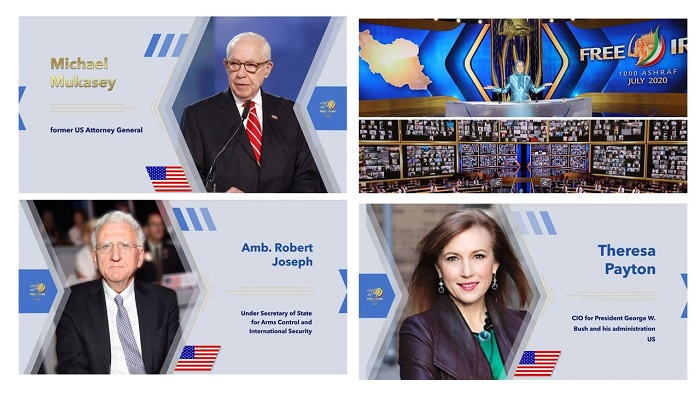 This week thousands and thousands of Iranian dissidents and their supporters participated in a virtual summit called the ”Free Iran Global Summit,” which has been offering a platform for Iran’s key dissidents, lawmakers, and influential figures like Trump’s lawyer, Rudy Giuliani, and former Sen. Joe Lieberman.

Other people who have spoken include:

“The most restrictive sanctions must be snapped back against the regime. The regime’s nuclear efforts have not abated. It continues to support terrorism,” said Michael Mukasey, 81st U.S. Attorney General, at the #FreeIran2020 online event.https://t.co/rwQRWbmj9v

Theresa Payton, CEO of Fortalice LLC, Cybersecurity and Intelligence: The regime spreads disinformation and fake news. They wish to influence the media to discredit the opposition, the #MEK. #FreeIran2020 #WeSupportMEK pic.twitter.com/8lrX3rzVcF

Former US Undersecretary of State Robert Joseph told #FreeIran2020 conference: regime change must come from within and will come from within. @Maryam_Rajavi ten-point plan provides a plan of action for a free and democratic Iran.https://t.co/OSdgQ7DsTH

The National Council of Resistance of Iran (NCRI) and the (PMOI / MEK Iran) which were the key force behind the event, said that the participants from 102 countries and 30,000 locations. Their messages were issuing a warning about the regime’s increase in the use of terrorism in the region and Europe. They have asked from the international community to actively support a regime change.

The organizers of the summit said that the event showed to the international community that “there is a peaceful alternative to replace the regime currently holding power in Tehran.”

This action was supported by Ali Safavi, a member of Iran’s Parliament in Exile and an NCRI member. The event did not face a repeat of the thwarted terrorist plot which was targeted at the summit in 2018, which has now led to a number of arrests.

A majority of the members of the House of Representatives last June backed a bipartisan resolution in relation to Iran that unanimously backs the Iranian opposition movement’s demand for the installation of for a secular, democratic Iran. It condemned any Iranian state-sponsored terrorism.

Recently, in Tehran, there have been several big street protests led by ordinary Iranians. The regime’s response was to kill 1,500 of those who were involved in the protests. This has sparked even more support for a regime change.