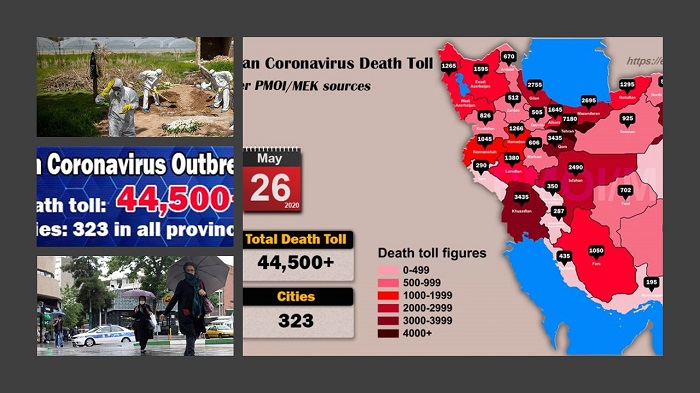 Mrs. Maryam Rajavi, the president-elect of the National Council of Resistance of Iran, has released a message to the youth of Khuzestan in the wake of increases in bread and gas petrol prices and the devastating consequences of COVID-19 in the district to help the most oppressed in all the chaos.

Despite the regime having 60 billion dollars of the people’s money, the hospitals are overflowing with victims and the hospital conditions are poor. The situation is so dire in the city that 16 cities have been isolated. Even worse 1,000 people have been added to the list of those who have died.

President Hassan Rouhani has said he isn’t going to shut any more of the economy down but people will have to bear the impact of the virus.

Maryam Rajavi, as President-elect of the National Council of Resistance of Iran (NCRI), the main opposition group, has reported that reopening businesses in Khuzestan was suicidal and is a great burden on the people. She holds the regime responsible for the high fatality rates in the country and its inhuman response has been a disaster for the oil-rich province of Khuzestan where there are so many people affected by COVID-19. She says the regime is only interested in maintaining its despotic rule with no concern for the health and well-being of the people.

Villagers in the coronavirus-stricken province gathered on the road connecting the cities of Ahvaz, Ramhormoz, and Omidiyeh to protest serious shortages of drinking water in their homes. Residents of Khuzestan Provincehttps://t.co/aIglLZbj8f#Iran #MEK #COVID__19 @USAdarFarsi pic.twitter.com/oab5IyKULj

The regime has spent more time suppressing the opposition, made up of students, dissidents, and political prisoners, than dealing effectively with the outbreak of the virus. Political prisoners should have been released.

Maryam Rajavi now wants the international community to demand that recently detained people should be released. She is also asking that the United Nations Secretary-General, the High Commissioner of Human Rights, the Special Rapporteur for the Situation of Human Rights in Iran, and other relevant parties to visit Iran so they can see for themselves the inhuman acts that the regime is currently involved in.

The MEK (The People’s Mojahedin Organization of Iran) announced yesterday, the Coronavirus death toll is more than 44,500 in 323 cities across Iran. The number of victims in Khuzestan is 3,435.

May 25 – Farrokh Shahr, southwest #Iran
Locals protesting government measures transferring their river waters to another city for a state-run project.#IranProtestspic.twitter.com/lJmoDe7QAn

The health director of Mahshahr told ILNA news agency, “The Coronavirus outbreak in Khuzestan has taken an upward trend in the last few days, Mahshahr hospitals have been overwhelmed with patients. Naft Hospital allocated another ward to Coronavirus patients and beds are not enough, and there is no room for more patients and, many of the medical staff have contracted the virus, and emphasize that we have no substitute for them.

The regime daily Resalat referred to the mismanagement, and protests by Ahvaz residents. It warned, Only an excuse is needed, like throwing a lighted match into a haystack, it will destroy everything.

Another regime daily, Mostaghel, wrote, “The bloody November led a significant segment of society to stay away from the elections… That absent 60 percent is not only apathetic to this election (Presidential election) but also is protesting the status quo. The largest and most obvious opponents are the poor and the unemployed.”