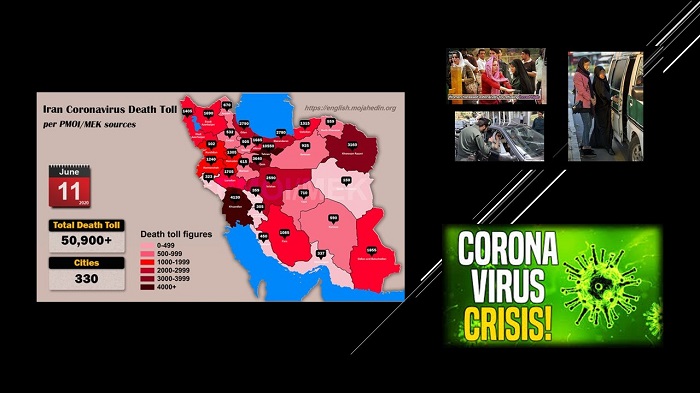 We are now almost in the middle of June, well into the COVID-19 crisis, but the Iranian regime seems to be in denial as if there was no such thing as a global pandemic. Few measures have been implemented to control the spread of the virus.

The (PMOI / MEK Iran) announced that the Coronavirus death toll in 330 cities across Iran had exceeded 50,900. So as a result 50,900 people have now lost their lives. Strange may it seem, but the regime has announced that there have only been 8,580 deaths, which works out to be a fraction of the true mortality rate.

More than 50,900 people have died of the novel #coronavirus in 330 cities checkered across all of #Iran‘s 31 provinces, according to the Iranian opposition PMOI/MEK. pic.twitter.com/1SPpd74gM7

The death toll in key provinces is as follows:

These facts are not fiction and they don’t take into account all the regions. By this time the regime should know what to do, but instead, it has allowed the virus to spread uncontrollably in what now appears to be the predicted 2nd wave, which is seemingly far worse than the first.

As a response, Alireza Zali, head of Tehran’s COVID-19 Task Force, has suggested that the quarantine measures relaxed recently may be reconsidered, as hospitals in Iran have seen a surge in patients seeking treatment for the deadly virus.

The Hormozgan province representative in the regime’s Supreme Council of Provinces, chaired by mullahs’ incompetent President, Hassan Rouhani, has revealed that his province is now in code red as more people succumb to the deadly virus.  On June 10th, it was revealed that not only deaths have risen, but the number put in the hospital has doubled over the past fortnight.

In Kurdistan, the Tasnim News Agency had some sad news to report on June 10th and that was that Sanandaj’s Towhid hospital was now bursting to its limits with patients suffering from COVID-19. Eyewitnesses are reporting that demand exceeds supply when it comes to allocating beds. This is a total disaster with no solution in sight. How could a government ever let this happen?  Just use the money in the bank like other countries have done to support families who have lost income earners for the time being until the country can get back to normal.

In Ilam, according to the dean of the medical sciences university, the number of  COVID-19 patients has risen dramatically and there is no clear end in sight.

As the situation regarding COVID-19 becomes more critical, public relations for the Ahvaz Medical Sciences University stated that the only choice they had left, according to the orders of the supreme public relations council of health, according to facts released by the state-run Aftab-e Yazd, was to censor information about statistics to discourage people from protesting about the way COVID-19 had been handled in the country.

The ISNA quoted Mohammad Reza Mirza Beigi, the head of the Nurses Organization, as saying that 7,000 nurses have contracted the deadly virus. In Baghiatollah Hospital, the largest Revolutionary Guard’s hospital, more than 150 health workers have contracted COVID-19 and little has been done about this, as women are only considered to be 50% human.

The #PMOI #MEK #Iran and the #NCRI believe that the women of Iran deserve better #Maryam_Rajavi has a ten-point plan for the democratic future of Iran that includes gender equality.https://t.co/24wb7dlIbh #IRGCTerrorWithoutBorders #Iranian @USAdarFarsi #MullahCovidHolocaust pic.twitter.com/JW5FaAzLhO

The Iranian regime has dared to penalize women in this COVID-19 crisis. It has ordered its officials to allegedly fine women if they are seen traveling in vehicles without wearing the hijab. It has been alleged that the regime’s Revolutionary Guards are the organization behind this. The penalty is imposed when a vehicle is observed carrying female passengers who are not wearing a hijab. The driver is told by text that he is in violation of the hijab rule and should immediately show up at the closest police station.

A news report has revealed that the regime intends to open 80 new stations for the police in Tehran alone to monitor hijab use, through employing state-of-the-art electronic cameras and equipment. This gives them the proof they require to prosecute those in what has been referred to as “un-Islamic social behavior.” It doesn’t take too much to work out that despite the devastating outcomes of the COVID-19 health crisis the regime is using the situation to exert its power which is ultimately going to end up with the evolution of a larger protest movement. There will not be a lot the regime can do about it.

Hossein Ashtari, last April, as the commander of the regime’s repressive state security forces, emphasized the comments made by Montazeri on defending police brutality against women, by saying that hijab violators make the IRGC commanders feel threatened. He said the police should be cautious when confronted by women who refuse to wear the hijab.

In the meantime, COVID-19 hasn’t been forgotten, but Rouhani has tried to downplay the recent surge by attributing it to the fact that more tests have been conducted. He has said the quicker the cases are detected, the quicker victims can be treated in hospital. However, this is not quite the thinking of the head of the New Illnesses Research Center in Tehran’s Pasteur Institute. He remarked in a recent report that if the canceling of the compulsory quarantine is causing an increase in victims, then this measure needs to be reconsidered.

Amid the #COVID19 Crisis, Why is Seeking Regime Change in #Iran Important pic.twitter.com/OERw3GPjeX

Amid the #COVID19 Crisis, Why is Seeking Regime Change in #Iran Important pic.twitter.com/OERw3GPjeX

Round up of COVID-19 cases

While COVID-19 still inflicts unprecedented casualties protests are still ongoing where people are demanding action from the mullahs on a range of issues.