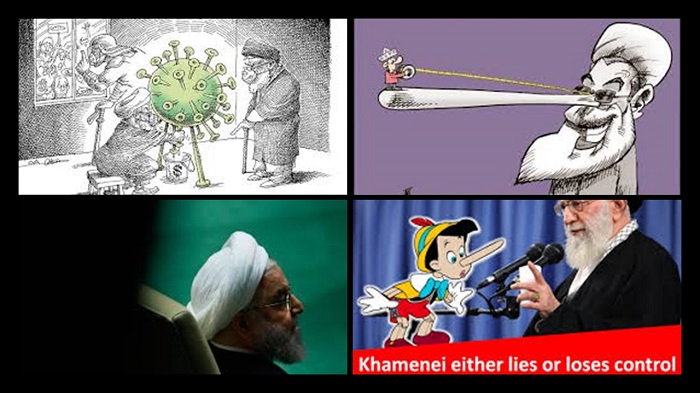 The People’s Mojahedin Organization of Iran (PMOI / MEK Iran) has reported that more than 44,300 people have died after contracting Coronavirus. It maintains that the situation is far from being brought under control, and medical professionals and experts tend to agree with this. Even regime officials are saying that the situation remains critical in large parts of the country.

As well as warning that areas are still in the middle of the struggle to contain the virus, many experts are saying that the government’s plans to reopen areas for a return to normal are going to make the situation even worse than it already is.

The regime’s death toll is only a fraction of what the (PMOI / MEK Iran) is reporting. A senior health official in Golestan said at the beginning of April that 2,230 people had died after contracting the virus in the province, whereas the regime has only confirmed 10 deaths.

More than 44,300 people have died of the novel #coronavirus in 320 cities checkered across all of #Iran‘s 31 provinces, according to the Iranian opposition PMOI/MEK. pic.twitter.com/fJkl3qmaNH

Despite all of this, Iranian President Hassan Rouhani said during the latest Coronavirus Task Force meeting that further restrictions would be lifted. He said that the situation is back to normal in at least 10 provinces where the virus has been contained.

However, very tellingly, Rouhani did not name the provinces that have gone back to normal. The Health Ministry denies that any are clear of the virus. And by saying that ten provinces were back to normal is also to admit, by omission, that the other 21 provinces are still battling against the virus.

This is the kind of deception that the people and the international community have been exposed to over the past few decades. The regime cannot be truthful to anyone and the people of Iran are always the first to be impacted.

More than 42,100 people in 318 cities in all 31 provinces in Iran have died from #COVID-19, the disease caused by the novel #coronavirus, according to a statement released on Saturday, May 16 by the #MEK Iran.https://t.co/waS6qEFEK9#Iranian @USAdarFarsi

This time, like many times before, the regime is battling against the truth that the opposition (PMOI / MEK Iran)is revealing. This is extremely frustrating for the Iranian president, and on this occasion he is also battling against regime officials and even state media that won’t print the lies he is telling.

President Rouhani knows that he needs to tread carefully because the situation in Iran is very delicate. With two major uprisings in the past couple of years, another one is on the horizon.

However, as far as the people are concerned, the regime’s mismanagement of the crisis, and its blatant negligence, are unforgivable. They will not be able to forget that tens of thousands of people have died from this virus that the regime neglected to contain.