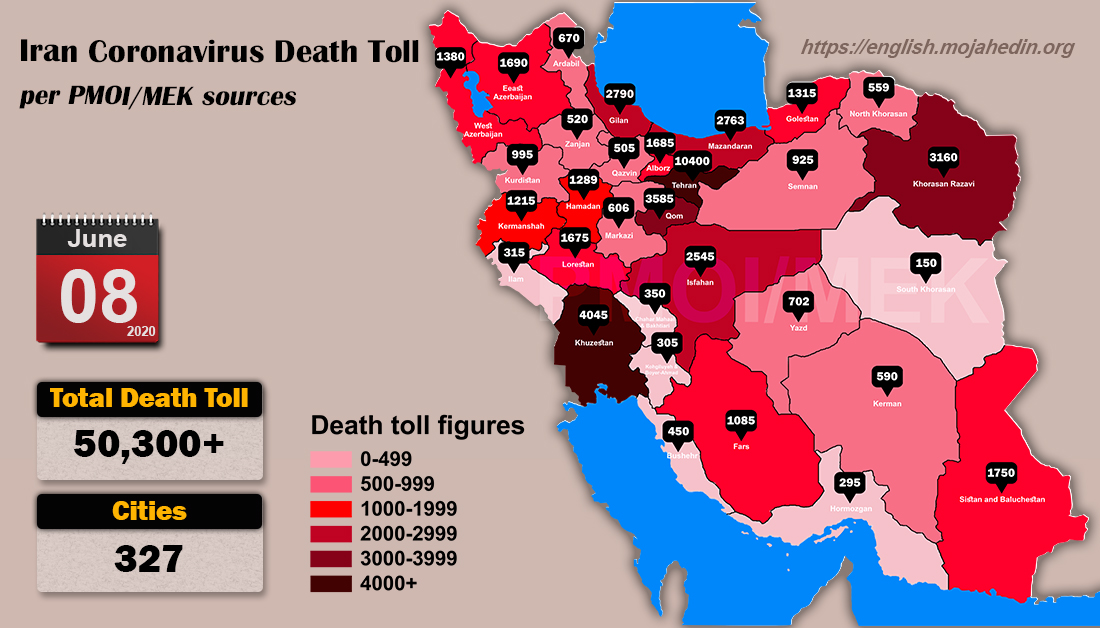 The main opposition to the Iranian regime, the People’s Mojahedin Organization of Iran (PMOI / MEK Iran), has reported that more than 50,300 people have died after contracting COVID-19 across the country. Every single province has been affected and 327 cities have been struggling with the virus.

Since the beginning of the outbreak, the Iranian regime has been trying to make it appear that the situation is under control. However, this could not be further from the truth. The regime’s propaganda machine has been put into motion and the death toll reported is just a fraction of the real figure. The latest figure announced by the regime is 8,209 – a mere fraction of that reported by the opposition that has been closely monitoring the situation.

How is #Iran’s wealth spent or plundered by the mullahs’ regime pic.twitter.com/hLwSKBtqSh

The Iranian economy has been heavily impacted by the Coronavirus outbreak because of the pause that has been put on economic activities. Iranian President Hassan Rouhani has been torn between the economy and the health crisis but has chosen to work on the economy rather than solving the health crisis. During a meeting with the Coronavirus Task Force committee a couple of days ago, President Rouhani said that shops must reopen, factories must continue production, and movement of society must continue. He said that the regime has “no other option”.

It is frustrating for the regime that the (PMOI / MEK Iran) has been reporting on the health crisis because it proves that the country’s leaders have been lying to the people and it makes it very clear that officials are not concerned about the people.

President Rouhani described the (PMOI / MEK Iran) reporting on the COVID-19 situation as “propaganda” on the part of the “enemy” and acknowledged that the international community is listening. The (PMOI / MEK Iran) role is an embarrassment to the regime because its lies are being highlighted.

The role of the opposition in Iran is primordial. It is supported by a number of Resistance Units inside the country that have been very present for the past few years. They are ensuring that the voice of the people is not silenced, weakened, or dismissed and they are keeping up the momentum of dissent.

Recently, the Resistance Units have been active in a number of cities across the country, including capital city Tehran, Shiraz, Karaj, Sarbandar, Rasht, Saveh, and Isfahan, among others. The brave young people across Iran have also been very active in displaying their disdain of the regime. Last week in Isfahan, a couple of IRGC Basij base signs were torched, while in other cities they displayed and then torched images of the Supreme Leader.

Supporters of the #PMOI celebrating the founding anniversary of #MEK Tehran, Shiraz, Sabzevar and Hamedan-Down with Khamenei hail to Rajavi The messages were from the leaders of the main opposition movement in Iran #NCRIhttps://t.co/ZxGIOL0R6v #Iranian #coronavirus @USAdarFarsi pic.twitter.com/6H1XupCDZn

Members of Resistance Units organized activities across the country, graffitiing in public places and displaying banners or chanting slogans such as the following: “Rise up to overthrow the regime of the Supreme Leader”, “The spring of Iran’s freedom will be realized by us and by our own hands”, “Down with Khamenei, Viva Rajavi”, “The Iranian people’s wealth, which is under the control of the IRGC & Khamenei must be wrested out of the mullahs’ control”, and “Down with the principle of the Supreme leader’s rule”.