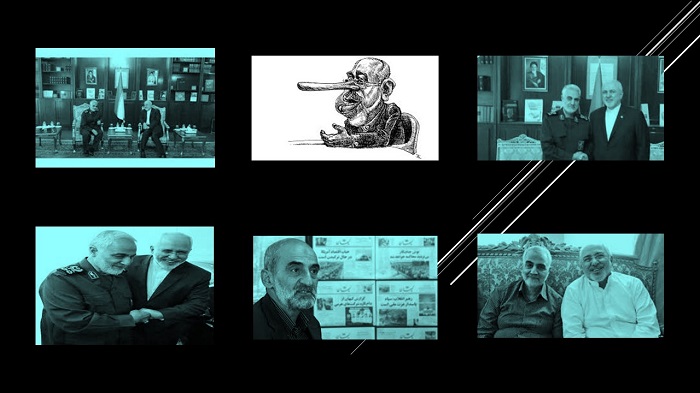 The infighting in the Iranian regime continues. A few years ago, the different factions of the regime were able to give the impression that all was rosy in the leadership of Iran, but now the situation is very different.

Hardly a day goes past without news about some new or continuing dispute between the opposing factions.

A few days ago, Mohammad Javad Zarif, Iran’s foreign minister, was called before the new parliament. It resulted in even more infighting and the disputes are very telling of the crisis the regime is currently dealing with.

Before the JCPOA, the #Iranian regime tried its best to attain its #nuclear ambitions as having the status of a #nuclearban country. However, these ambitions were shattered by the #NCRI and the #PMOI #MEK #Iranhttps://t.co/0ZBRkOwFYZ #FreeIran2020 @USAdarFarsi pic.twitter.com/lsTfcySxam

Zarif spoke about the widely discussed political disputes, saying that the international community does not look at the regime and separate officials into different categories such as revolutionaries (or not), reformists, liberals, etc. He said that they are “all in the same boat”.

Speaking about Iranian foreign policy, Zarif reminded parliament that Supreme Leader Ali Khamenei determines all such matters and that it “is not a subject where different factions or groups can argue about [it]”.

The foreign minister also tried to make it appear that there was some coherence in the leadership. He said that the foreign ministry and the now-deceased Qasem Soleimani worked together closely and that all regional decisions were taken together.

However, there were many displays of anger when Zarif was speaking with many calling him out loudly as a liar.

In a recent article published by Kayhan (a publication recognized as the mouthpiece of the Supreme Leader), the editor-in-chief called Zarif out and dismissed claims that the actions taken by the foreign ministry are defendable. Hossein Shariatmadari questioned why the foreign minister cannot substantiate his claims.

He pointed out that the Supreme Leader said that the sanctions relief resulting from the 2015 Iran nuclear deal was jeopardized by the foreign ministry and that only temporary relief was promised. He said: “The result has not been any sanctions relief and dozens of other sanctions have been added! The negligence of our country’s negotiating team to [Khamenei’s] warnings allowed the U.S. to deceive our negotiating team! Meaning they once again did not pay any attention to [Khamenei’s] advice about not being fooled by the enemy’s smiles.”

The foreign minister did have some shows of support, with one former member of parliament even saying that any criticism directed towards Zarif should be directed towards the regime as a whole. A former member of parliament Ali Mottahari, a known opponent of the Supreme Leader’s faction, said that Khamenei oversaw the entire nuclear deal negotiations, therefore it is unfair that the blame should be pinned on the foreign ministry alone.

Zarif’s questioning before the mullahs’ new parliament for the first time became a scene of disputes that shed new light & provided an intriguing window into the internal disputes & crises riddling the entire regime.#Iranhttps://t.co/gUcnFOWYWz

And this is a good point because no such decisions get made without the ultimate power in the country approving it first.

In any case, what is clear is that the regime is not going to survive for much longer no matter how divided or how united the leadership is.

The fact remains that the regime, as a whole, is a criminal, negligent, and brutal regime that relies on belligerence to stay in power.

The state-run Baharestaneh website, allied with the Supreme Leader Ali Khamenei, posted an article on August 28th, 2019, that it said:

“Now that the enemy of the state, with such an apparatus, has prepared for a confrontation, we must acknowledge the fact that we are all in the same boat. Therefore, one must tell all government officials and the associated others that the status quo is a very serious threat that one cannot easily neglect.”

This article highlights the situation in mullah’s regime. In the face of escalating protests across the country, especially with (PMOI / MEK Iran) resistance units galvanizing and spearheading these efforts, the mullahs’ regime is ineffective. Historically, with societies who, like Iran, are on the verge of an explosion, deterrent actions often have the opposite effect to what was expected — they accelerate the explosion.

The MEK (Mujahedin-e Khalq) has been supporting the people of Iran for decades and they want to achieve the respect of human rights as well as freedom and democracy. The (PMOI / MEK Iran) has been encouraging the people of Iran to participate in protests and anti-government demonstrations in a bid to overthrow the regime that only has malign interests.