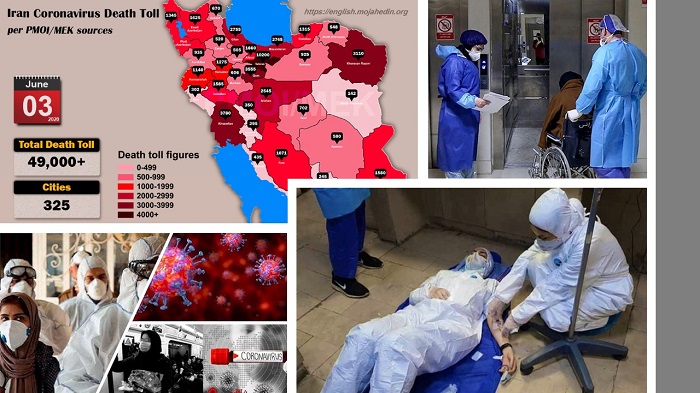 Since the very beginning of the Coronavirus outbreak in Iran, the ruling regime has failed to protect the people and has been extremely negligent. It has essentially allowed the virus to spread across the country, putting millions of people at risk.

Iranian President Hassan Rouhani and Supreme Leader Ali Khamenei have tried to downplay the extent of the crisis, claiming on countless occasions that the outbreak is under control and that hospitals are coping well with the numbers of people hospitalized.

The figures that the regime has been stating have been grossly under-reported – only a fraction of the figures provided by the People’s Mojahedin Organization of Iran (PMOI / MEK Iran) that has been monitoring the situation very closely.

More than 48,500 people in 324 cities in all 31 provinces in Iran have died from COVID-19, the disease caused by the novel coronavirus, according to a Monday announcement from the MEK. Read more…https://t.co/Fh3PHw6nK8 pic.twitter.com/CftCIo1KeG

Normally regime officials would back up the regime’s made up figures and statistics, but more officials are now being outspoken about the reality of the health crisis. Saeed Namaki, the regime’s Health Minister, for example, has said that the country is facing a “new dangerous peak” and that the outbreak is “far from over”.

Provincial officials across the country have also been speaking out about the situation in their respective provinces, and it is very clear that there are no “white zones” (areas free from the virus) anywhere in the country – contrary to what President Hassan Rouhani has been saying for weeks.

On 30th May, Rouhani had to backtrack on his comments and finally admit that the number of cases of COVID-19 is on the increase and that the situation now is even worse than it was during February and March.

The outbreak in Iran has been accompanied by huge amounts of propaganda. However, the people of Iran have not been fooled by this – they are living and experiencing the effects of the health crisis and they know that the regime has not handled it in the best way it can. Rouhani has said many times that the country has managed the crisis much better than Western countries.

#Iran’s Regime Desperate yet Criminal Decision to Reopen Religious Sites and Sermons Amid Coronavirus #Outbreak The regime intends to use religious sites for political purposes & to financially take advantage of worshipers at the expense of people’s liveshttps://t.co/5eg5ZwDjyB

The return to work and the reopening of religious sites have, as warned by scientific and medical experts, resulting in a huge increase in the number of people becoming sick and needing to be hospitalized. The regime’s propaganda cannot hide this fact and this is one of the reasons that officials, including Rouhani, are now having to face and admit to the reality of the situation.

One of the most enraging aspects of the situation is that the Supreme Leader’s huge wealth could have helped contain the outbreak. His wealth has been amassed through decades of corruption. The nation’s wealth.