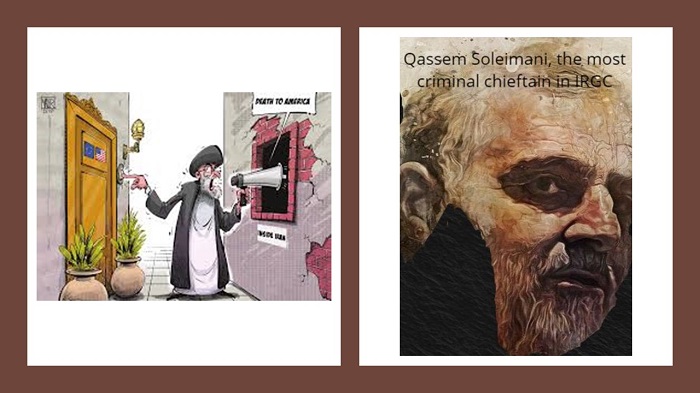 The Iranian regime recently issued a warrant for the arrest of US President Donald Trump and a number of his aides. The Iranian regime has taken this action because of the US drone attack that killed top Iranian General Qassem Soleimani at the beginning of the year in Iraq.

Tehran prosecutor Ali Alqasimehr explained that Trump and dozens of US officials are being accused of “murder” and “terrorism” for their role in the attack that killed Soleimani.

Iranian regime’s top terrorist chieftain, #Soleimani, was killed in the early hours of Friday, January 3, 2019, in a preemptive US strike to terminate plots against the U.S. forces in Iraq, says a press release from the Pentagonhttps://t.co/AwsiSgo5jQ
#MEK #Iran @USAdarFarsi pic.twitter.com/TiyVI0x1C5

Soleimani played a major role in carrying out the regime’s policies abroad. He has been described as Iran’s top terrorist and he has been involved with some major atrocities both abroad and inside Iran against the people. He was despised by the people of Iran who rejoiced when they heard that he had been killed. The regime, on the other hand, held three national days of mourning, showing just how significant his role was.

Former Member of European Parliament and the coordinator of the Campaign for Iran Change, Mr. Struan Stevenson, ridiculed this arrest warrant. In a press release entitled “Iranian arrest warrant for US President described as risible”, Mr. Stevenson affirms that President Trump “is in no danger of arrest”.

Speaking about the killing of Soleimani, Mr. Stevenson said that the United States has done the world a favor. He said that as the leader of the notorious Islamic Revolutionary Guard Corps’ (IRGC) Quds Force, Soleimani “was himself an international terrorist and guilty of thousands of murders and the US drone strike rid the world of a dangerous predator”.

Mr. Stevenson also pointed out that the court case of a senior Iranian diplomat is about to start in Belgium. Assadollah Assadi was involved in a plot to bomb the Free Iran gathering attended by supporters of The National Council of Resistance of Iran (NCRI) and The People’s Mojahedin Organization of Iran (PMOI / MEK Iran), just outside Paris in 2018 and the regime’s attempts to repatriate him have failed. This court case will expose some of the regime’s malign behavior.

Furthermore, Iranian Foreign Minister Javad Zarif and other criminal regime officials may find themselves indicted for crimes and terrorist acts.

The regime is clearly under a lot of international pressure, as well as domestic pressure with continuing dissent and the Coronavirus health crisis. It is trying to find a way to survive, but its attempts are certain to fail.

Mr. Stevenson highlighted that the regime is hopefully going to be held accountable for the 1988 massacre considering that the United Nations is investigating the events of this horrific crime. Hopefully, the figures involved in this atrocity, many of whom have continued to rise through the ranks of the regime, will be recognized, held accountable and made to pay for their crimes following a trial in the European International Criminal Court in The Hague.