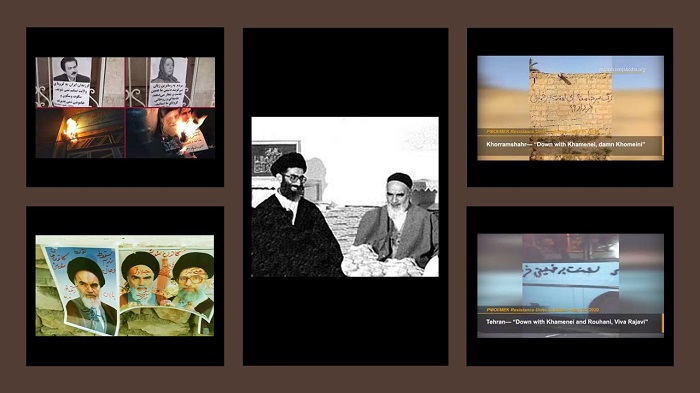 The Iranian Resistance has been celebrating the anniversary of the death of Supreme Leader Ruhollah Khomeini. This symbol of oppression led the way for the suppression of the opposition, trying at every opportunity to quash the rising dissent in Iran since he took power. He was responsible for one of the most horrific crimes against humanity in recent times – the incident that has become known as the 1988 massacre.

To celebrate the anniversary of his death, members of MEK Resistance Units took to the streets, chanting slogans and bearing banners with their thoughts. They gathered in public areas and voiced their support for Massoud Rajavi, leader of the Iranian Resistance, and Maryam Rajavi, President-elect of the National Council of Resistance of Iran (NCRI).

People joined in several cities, including in the capital city Tehran, Urmia, Kerman, Kashan, Isfahan, and many more. Some of the banners seen across the country read messages such as the following: “Down with the principle of the Supreme Leader’s rule” and “Down with Khamenei, damn Khomeini”.

Young people also took to the streets in Iran, displaying their anger and torching images of Khomeini and current Supreme Leader Ali Khamenei. They were present in several cities including capital city Tehran, Kerman, Tabriz, Ahwaz, and Rudsar.

On Saturday 30th May, defiant youths torched a Basij base in Nishabur. The Basij Force is a suppressive branch of the notorious Islamic Revolutionary Guard Corps (IRGC) that is charged with cracking down on the people, especially during times of unrest. They have been brutal towards the people and they are one of the most despised parts of the regime. They played a huge role in violence against protesters during the November 2019 uprising.

In the few days previous to this, rebellious young people had been very active in Isfahan where they torched a couple of IRGC bases, as well as banners with the image of Qassem Soleimani – the IRGC Quds Force commander that was killed at the beginning of the year during a US drone attack in Iraq. He was a very loyal commander to the regime and played a huge part in the regime’s suppressive policies. He led the regime’s terrorist activities abroad and was instrumental in the crackdown on Iraqi protesters last year in Iraq after the people made it clear they wanted Iran to leave their country.

The Iranian people want to see the regime collapse. They are sick of the repression that has been forced upon them for the past four decades and they are adamant that they are going to achieve their goal. The Resistance has advanced greatly in the past few years. Not that long ago, many people in Iran would never have dared to voice their dissent in public – now they are openly chanting “death to the dictator” in the streets.