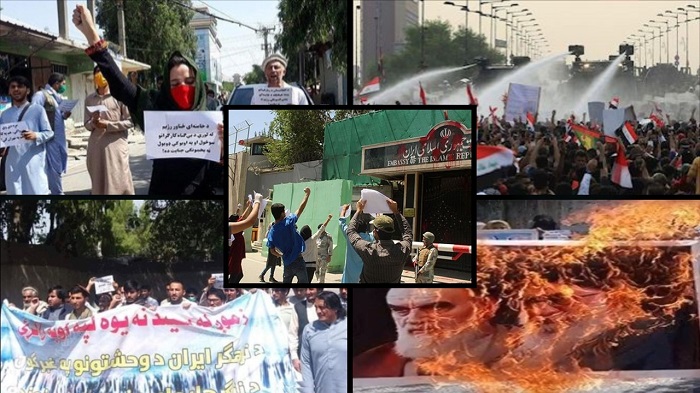 The Iranian Peoples and their Resistance (NCRI) and The People’s Mojahedin Organization of Iran (PMOI / MEK Iran) are working towards freedom, democracy, equality, and respect for human rights. They know that the only way they will be able to achieve this is through the collapse of the mullah’s regime.

Not only has the regime suppressed their rights for decades, but it has also neglected social issues, environmental issues, and health issues. It has been meddling in the internal affairs of other nations and it is the biggest state sponsor of terrorism in the world.

The people of Iran have been protesting, striking, and holding anti-government demonstrations on and off for the past few years. They are not alone in their contempt for the mullah’s regime. In Iraq, the people have been holding rallies and demonstrations against the Iranian regime’s presence in their country.

Demonstrators in the cities of Najaf and Babil, both located in southern #Iraq, are protesting against poverty, economic corruption, and the Iranian regime’s meddling in their country through proxy groups and corrupt political figures.#Iranhttps://t.co/3nZQPmm2Vm

The Iranian regime has been piling many resources into Iraq hoping to obtain more and more influence there. It has several militias and proxy groups that operate in Iraq and Iran have enjoyed having political influence in the country. However, the people of Iraq want this to end and they are calling for the Iranian regime to be held accountable for its actions – in particular with regards to the suppression of protesters last year. The people of Iraq protested last October but were met with a brutal response on the part of local suppressive forces that were instructed by commanders of the Iranian regime’s IRGC.

Young people took to the street in Najaf and torched checkpoints and the home of a governor with ties to the Iranian regime. They called for him to resign from his position. Many protesters were wounded when the government’s anti-riot agents opened fire on them.

Similar demonstrations took place in Al Diwaniyah city and in Karbala where they also called on the province’s governor to hand in his resignation because of his links with the Iranian regime. In Karbala, the demonstrators called for the provincial governor to be held responsible for the violence and brutality locals were met with.

Iraqi people in West Hamzah gathered outside the Asaebl Ahl al-Haq building. The group is a militia with close ties to the Iranian regime’s IRGC and its Quds Force. The protesters called for the closure of the site but were met with suppressive forces that opened fire on them.

Protests were also held in Afghanistan – another country that has been affected by the Iranian regime’s meddling. Protesters in the Helmand and Kabul provinces called the Iranian regime out for its crimes against Afghan migrants.

The Afghanistan Solidarity Party held protests outside the Iranian embassy in Kabul. Demonstrators spoke out about Iran’s IRGC that recently drowned scores of Afghan nationals on the border between the two countries. The protesters called on the expulsion of the Iranian ambassador from the country’s embassy.

In the Helmand province, a large number of demonstrators had similar demands. They were voicing their condemnation of the Iranian regime and its interference and its mistreatment of Afghan nationals.