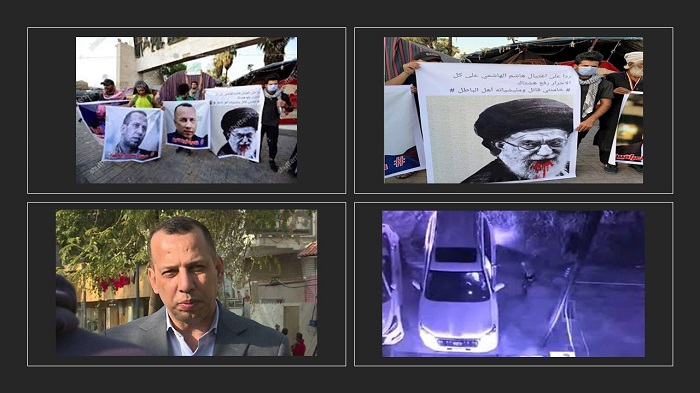 Earlier this week Iraqi protestors in Baghdad’s Tahrir Square took part in a “symbolic funeral ceremony” for Husham Al Hashimi, an Iraqi security analyst, who was recently assassinated while seated in his car outside his home.

The demonstrators were chanting slogans such as “Hezbollah is the enemy of God.” They were also seeking punishment for the assassins. At the same event, the demonstrators held up an image of Supreme Leader, Ali Khamenei, with the words, “Khamenei is a murderer and his proxies have no legitimacy.”

This is not the first time protestors have mentioned Iran’s regime as for a long time it has seen it be having a bad influence on its country.

Who is to blame for Husham Al Hashimi’s assassination?

Many are firmly blaming proxies connected to the Iranian regime’s Revolutionary Guards (IRGC) Quds Force. The cause of his death was from bullet wounds that littered several parts of his body.

The assassination took place outside his home where several people were waiting for him. On arrival, a single man ran over to him until he was barely a meter away and opened fire. He then fled the scene on a moped.

Many in #Iraq & across the region are holding the regime in #Iran & the Revolutionary Guards (IRGC) responsible for this assassination.pic.twitter.com/qkxD03RUql

47-year-old Husham Al Hashimi, born in Baghdad, was well respected in his role as a security analyst. His main subjects were ISIS and Al Qaeda and as well as playing the role of adviser to present and previous governments he had also written three books on the subject.

In recent years he had supported the popular protests last October that took place in Baghdad and Iraq’s Shiite-majority south in October. These protests accused the government of corruption, inefficiency, and “beholden to neighboring Iran.” Sadly 500 lives were lost in these protests. However, up to now, the killing of high-profile figures had not been common.

The EU ambassador to Iraq, Martin Huth, was quick to condemn the killing and said those responsible must face justice for such a cowardly crime. A similar sentiment was shown by Stephen Hickey, the present British ambassador to Iraq.

While the Iranian regime is facing major domestic and international challenges, it sees the future not so bright and has no other choice than “exporting the crisis to the outside of Iran”.

Iran’s main opposition movement, the MEK, has always pointed out that the regime’s policies for its existence are based on two factors: export of terrorism; hegemonic ambitions beyond their borders, enmity to the West and domestic suppression of all democratic forces – something the regime did in Iran and is trying to carry out in Iraq as well.

Mrs. Maryam Rajavi is the President-elect of the National Council of Resistance of Iran’s (NCRI): “Khamenei and IRGC commanders have repeatedly said should they not fight in Syria and Iraq they have to line up in Tehran, Hamedan, and Isfahan… Despite all the repression and arrests, they have imposed on the society, the people’s uprising has put them in a constant state of horror.”