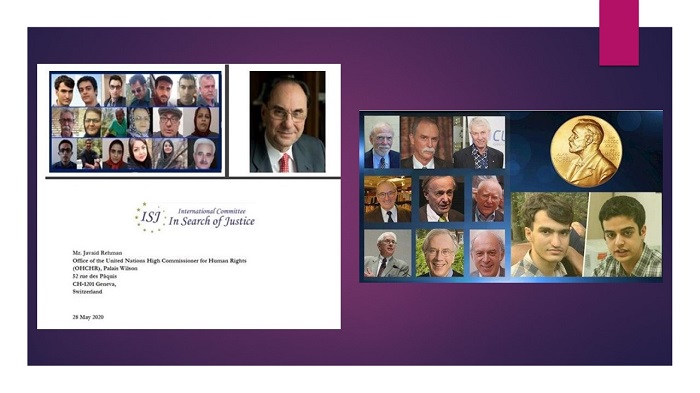 The International Committee in Search of Justice (ISJ) recently wrote a letter to Javaid Rehman, the United Nations Special Rapporteur, about the situation of human rights in Iran. The letter spelled out the concern regarding the regime’s recent arrests in early May of a large number of youth and supporters of the People’s Mojahedin Organization of Iran (PMOI/MEK) during the COVID-19 outbreak.

The letter expressed the belief that those arrested may be executed. Ali Younesi and Amir Hossain Moradi are, it is alleged, of particular concern. The ISJ also wants all political prisoners released immediately as it is a violation of human rights.

Summary of the letter to Javaid Rehman

Office of the United Nations High Commissioner for Human Rights

The letter mentions that the ISJ as a non-profit NGO registered in Brussels, whose members include parliamentarians from throughout the world and it has an interest in promoting freedom, human rights, democracy, stability and peace in Iran.

More international condemnation for the #Iranian regime’s arrest and torture of elite students Amir Hossain Moradi and Ali Younesi, along with 18 other people, for links with the Iranian opposition group (PMOI/MEK Iran).https://t.co/vqWgPkhLtD #Iran #MEK #NCRI @USAdarFarsi

The letter is expressing concern that the present regime in Iran is taking advantage of the chaos caused by COVID-19 to arrest large numbers of young activists who are pursuing human rights.

Of particular concern is the arrest of two students at Sharif University of Technology called Ali Younesi and Hossein Moradi.

They are accused of sympathizing with the People’s Mojahedin Organization of Iran (PMOI/MEK) Iranian main opposition to the mullahs regime.

The latter hasn’t been seen since April 10th, while the former was brought home covered in torture marks and who later went back with his parents to the torture center.

The letter mentioned the achievements of Ali, which are as follows:

The letter reports that the Iranian opposition has recorded the names and details of 18 others who were arrested.

The main concern is that many arrests have taken place of young activists in both Tehran and 20 other cities. The communication difficulties caused by COVID-19 have initiated the cracking down of activism. Along with the arrests there is confirmation that torture is used to force confessions and these are being broadcasted as a warning to others. Also there is serious concern that some prisoners may have been murdered and female prisoners have reportedly been subject to physical and psychological torture.

Another concern is the fate of prisoners with the outbreak of COVID-19 where there is evidence that not only is there a lack of medical facilities in the prisons but some prisoners have died from the disease.

The letter continues by alluding to the report presented by the UN Human Rights Council in February-March 2020 which provided key information about prison conditions and human rights’ breaches of prisoners. It suggests that more attention is required as human rights are as important now as they have ever been in these times of the global pandemic.

The ISJ says it will be happy to keep the information flowing about imprisonments and human rights’ abuses but it wants the United Nations to question the regime on its human rights’ abuses and send an international delegation to see for itself what is happening in Iran’s prisons and take the necessary action to bring an end to abuse.