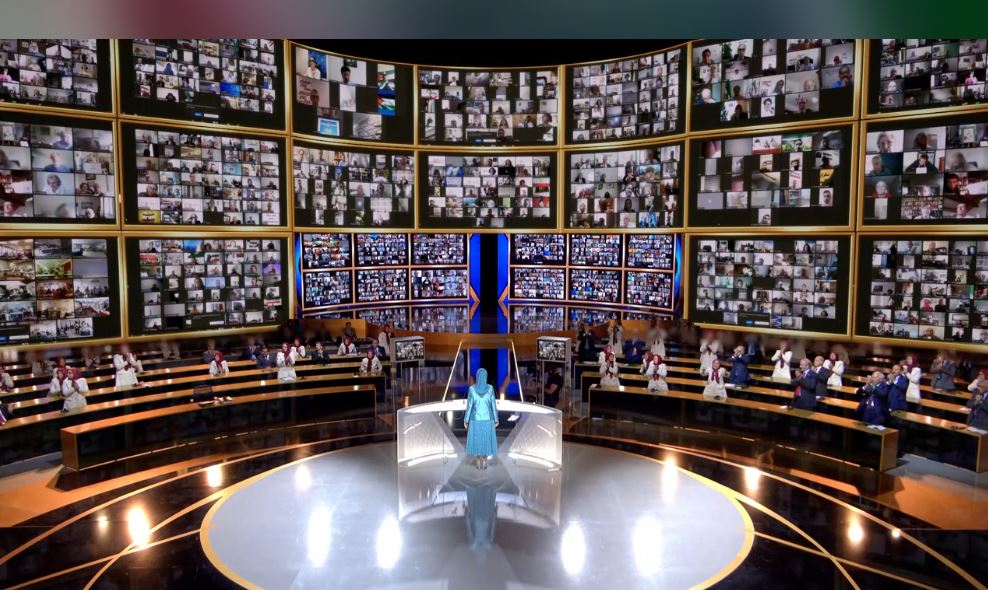 Friday 19th of July, Iranians and Iranian opposition supporters of the People’s Mojahedin Organization of Iran (PMOI / MEK Iran) and coalition National Council of Resistance of Iran (NCRI) took part in the biggest ever virtual summit of the Iranian Resistance.

The gathering connected 30,000 points in Europe, the U.S.A. States, and Australia and was virtual due to the impact of COVID-19.

Who took part in this virtual conference?

The keynote speaker of the event was Mrs. Maryam Rajavi, the President-elect of the NCRI

Other speakers included the following dignitaries:

Mrs. Rajavi started her speech by saying, “This summit echoes the voice of the Iranian people’s 40-year Resistance against religious dictatorship and fascism and for freedom and democracy. This is the voice of the largest, the longest, most sophisticated, and most serious organized resistance in Iran’s history. This summit echoes the calls for the clerical regime’s overthrow in the successive uprisings from December 2017 and January 2018 to November 2019 and January 2020…This summit is the voice of Resistance Units and rebellious cities across Iran who have put an end to a history of despair, incredulity, and inaptitude, and replace it with the pledge of ‘we can and we must.’’

She explained that the protests between 2017 and 2019 were the real proof that Iranians were seeking change and that the Iranian resistance intended to be instrumental in bringing about change. However, the regime’s apologists and lobby groups many of whom are paid refused to admit that this was possible and no one would ever take a step towards overthrowing the mullah’s regime. Even the regime itself tried to suggest that the MEK had no popular support but there was no shortage of young MEK supporters as some elite and award-winning students who supported the MEK found out when they were indiscriminately arrested because the regime feared the presence and influence.

Mrs. Maryam Rajavi went on to say that the regime is in a catch 22 situation. If they still follow their current path of terrorism and intimidation their days will be numbered, while if they alter their behavior and stop their torture, suppression they will weaken the existence of the rule of the velayat-e faqih (absolute clerical rule). “The final word is that the mullahs have no solutions and their regime is doomed to fall in its entirety.”

Mrs. Rajavi said that the death toll during the COVID-19 pandemic enabled the regime “to fend off popular uprisings and the threat of overthrow.”

Mrs. Rajavi’s on the resistance’s aim

She said the promise is ‘’to overthrow the regime, take back Iran and restore all the violated and plundered rights of the people of Iran…our people must enjoy the right to be healthy, to have shelter, jobs, organization and syndicates, the autonomy of ethnic minorities, the right to equal participation in running the society’s affairs, gender equality, and popular sovereignty…We urge all governments and the international bodies to stand with the people of Iran in this historic showdown with the greatest threat to the world’s peace and security …”