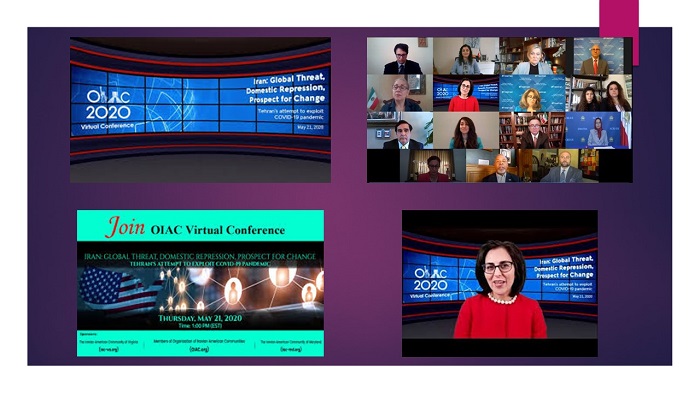 Members of the Iranian-American community and supporters of the People’s Mojahedin Organization of Iran (PMOI / MEK) from the whole way across the United States participated in a virtual conference entitled “Iran: Global Threat, Domestic Repression, Prospects for Change”.

The conference was moderated by D Ramesh Sepehrrad, a member of the OIAC Advisory Board. He said that the Organization of Iranian American Communities (OIAC) is continuing to push forward with efforts to see freedom in Iran.

Tom Ridge, the first Homeland Security Secretary, spoke during the conference, applauding those that are working hard to make Iran a free country. He vowed to reject the “repressive theocracy” and said that the people in Ashraf 3 in Albania (members of the Iranian Resistance that were given refuge there after being released from Camp Ashraf in Iraq) are among the “most visible heroes and heroines of this battle for a new and free and 21st century Iran”.

Former Democratic senator from New Jersey, Robert Torricelli, also voiced his support for those working towards freedom in Iran. He said that support from the United States is bipartisan and affirmed that sanctions will continue until the regime collapses. He also pointed out that the regime is attacking the two entities that it feels most threatened by – the United States led by President Trump and the opposition led by Mrs. Maryam Rajavi.

The representative of the Iranian American Cultural Society of Michigan, Dr. Afsaneh Maghsoudi, warned that the Iranian regime is using COVID-19 as a tool against the people. She also said that any medical assistance provided to Iran must go to the people.

A student representing Texas, Ms. Hasti Hesami, called on the “brave students” of Iran to continue with the legacy of student protests in the country, saying that they “played a historic role in political developments during and after the 1979 revolution”.

Many of the participants voiced their support for the 10-point plan for a future Iran that has been laid out by Mrs. Maryam Rajavi. The plan is based on bringing democracy, freedom, equal rights for all, and peace, among others, to Iran. The President of IAC of Georgia, Mrs. Batool Zamani, described Mrs. Rajavi’s plans as “visionary”, “forward-looking” and “progressive” and as “in line with the spirit of 100 years of Iranians’ struggle for freedom and justice”.

Former US Ambassador to the UN Commission on Human Rights Kenneth Blackwell reminded the participants that the current US administration has committed to pushing back against the Iranian regime that does not recognize the human rights of its citizens. He also highlighted that the regime is at the “epicenter of international terrorism”.

To end the conference, the participants agreed on several key points. Firstly, that regime change in Iran is inevitable and that the people of Iran have the full support of Iranian-American communities. They also agreed that the international community must recognize the people’s right to overthrow the mullahs and they called for support of Mrs. Rajavi’s 10-point plan for a future Iran. It was agreed that the maximum pressure policy on Iran should continue and that the UN arms embargo should never be lifted.