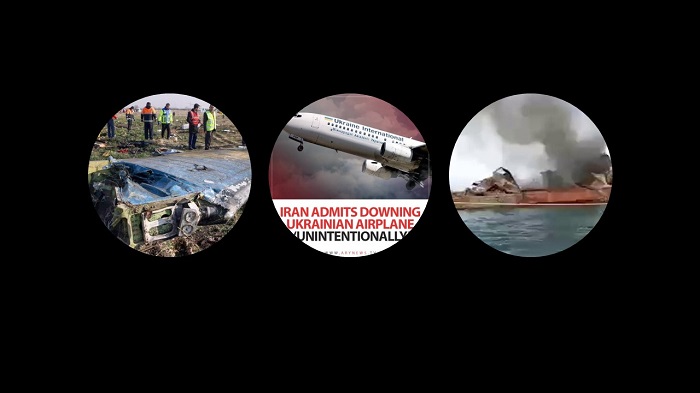 The only information so far published following the shooting are the 19 deaths and 15 injures, suffered by the vessel’s crew. This is a reminder of the cover-up following the downing of a Ukrainian airliner in January by the Revolutionary Guards (IRGC), killing all 176 passengers on board. MEK Iran report: Hassan Rouhani was notified of the cause of the crash through government channels. But he waited 72 hours before admitting this horrific crime.

How was the Konorak vessel hit?

It happened on May 10th at about 2 pm when a missile was fired from the Sea of Oman shores by the regime resulting in deaths and injuries. It appears from reports that the missile originated from the naval ship Jamaran when it was involved in maneuvers. The missile was a cruise missile named Noor which had high explosive potential.

It was revealed that the Konorak hadn’t managed to get far enough away before the missile hit it. This type of missile seemingly has a guidance mechanism that once it has been programmed on a target, it has no choice but to hit it. What made matters worse was that the Konorak was armed with large amounts of ammunition when the missile struck it.

Reports have indicated that any person in the Navy is under orders not to reveal anything about the incident. Normally incidents like these are reported to the Sistan and Baluchestan governorate and law enforcement agencies in Chah Bahar but in this case it did not happen. So these administrations are treating the injured but don’t know how the injuries took place.

There is someone responsible for this error within the IRGC and the Navy. In most countries if this sort of grave error is made especially when casualties are involved an inquiry takes place and those found to be responsible are demoted or reprimanded but not in Iran and if a senior naval officer is involved s/he would be asked to resign. Not the case with Iran’s regime. It is far more important to cover up the incident than bring those at fault to justice.

Because discontent has started to emerge among navy personnel the regime has tried to silence them with a propaganda campaign. Habibollah Sayari, the Deputy Coordinator of the Army decided to go on a propaganda mission on May 16th and visited some of those injured. This was a staged event when all navy personnel said they would return to their naval bases when they had recovered.

Big delays to get to the scene of the incident

It wasn’t the regime that showed up after the incident but local boats and fishermen were there hours before anyone else turned up and helped the wounded. The regime’s first helicopter didn’t get there until at least 3 hours later. One question that is yet to be answered is why the regime wasn’t at the scene earlier even though its vessels are well equipped with detection technology. Konorak itself is a major center for both the navy and army in that area.

This incident involving the Konorak shows how weak the regime’s navy is. Overall, the Regular Navy serves as the key naval force for the clerical regime while the IRGC Navy does not possess such high-quality combat equipment as the IRGC Navy. It is just a joke when the regime’s commander of the naval forces states it is in the process in the next few months of constructing nuclear submarines.  It hasn’t yet produced uranium at the high enough enrichment rate and the mullahs’ regime has no idea how to construct a nuclear submarine.

The true casualty numbers from the Konorak ship incident have not been officially released yet as well as the real causes of the accident have not yet been determined and will become clearer in the future, while the mullahs’ regime will continue its cover-up.

The MEK Iran report facts show once again that the regime’s top officials, like Khamenei and Rouhani, were intending to misguide the international community and cover-up their crime against humanity and orchestrated campaign of lies and fabrications.