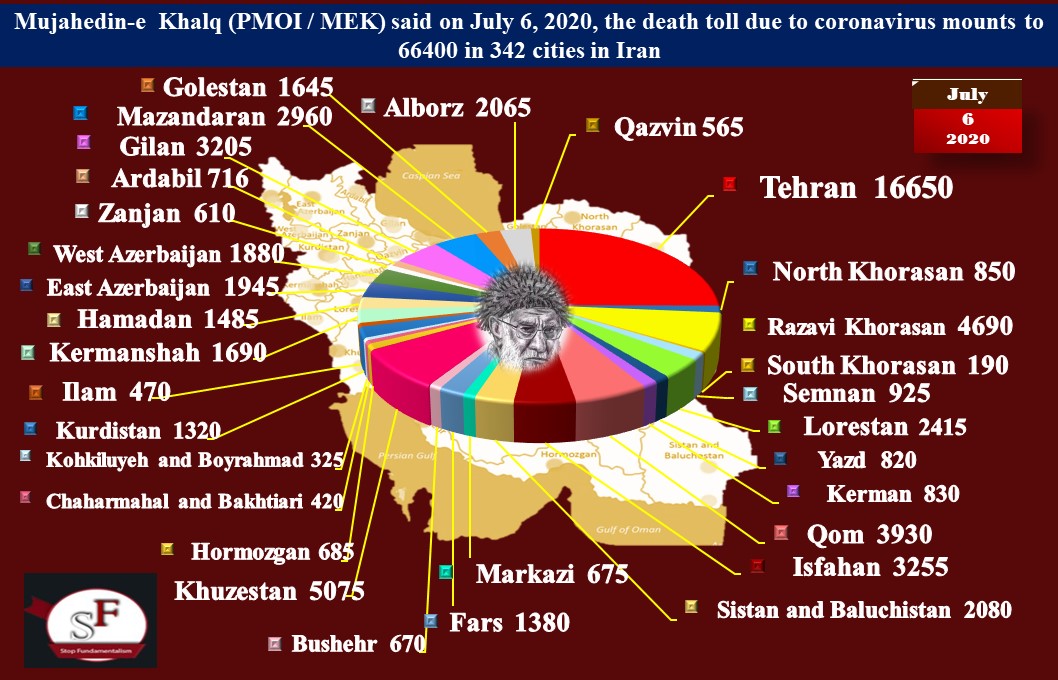 The Covid-19 crisis in Iran has gone from bad to worse, especially in Tehran. Every bed available in Tehran’s hospitals that has been allocated for Covid-19 patients is already full. The number of fatalities in the last 75 days is unprecedented, according to Tehran health authorities.

Patients are now occupying any available space in the hospitals, including chairs and stretchers.

1,000 Covid-19 patients have now been identified in Fars in the last 24 hours, according to a spokesperson from the Shiraz University of Medical Sciences. All hospitals in Fars are now full.

The number of patients in Zanjan has increased dramatically, as it has in Hamedan, where it has been reported that the ability to deal with the number of hospitalizations will soon be beyond capacity.

The Assembly of the Iranian Medical Associations has called on the regime authorities to commit the necessary finances to combat the disease.

According to the People’s Mojahedin Organization of Iran (PMOI / MEK Iran), the number of fatalities in Iran has reached 66,400, across 342 cities.

The number of fatalities in Iran, according to a Health Ministry spokesperson, was 160 in the last 24 hours. The number of patients in ICU was 3,201. The following provinces were in code red status:

These provinces are on “alert”:

A member of the National Coronavirus Combat Taskforce (NCCT), Masoud Mardani, said that the actual numbers of fatalities were likely to be much higher than that reported as many people who died did not do so in the hospital, so were not counted. He also said that Covid-19 tests were not 100% reliable, so not everyone with an infection was identified.

Over 66,400 people have died of the novel #coronavirus in 342 cities checkered across all of #Iran’s 31 provinces, according to reports tallied by the Iranian opposition PMOI/MEK as of Monday afternoon local time, July 6.https://t.co/xcWXF2oOge

The president of Iran’s University of Medical Sciences told the ILNA news agency that the number of Covid-19 patients had been increasing since mid-June and the hospitals in Tehran were barely coping. “In recent weeks, especially since Mid-Junethe prevalence of COVID-19 in Tehran, is increasing …We have had more patients since Mid-June, daily. We have always been facing limitations in hospital beds,” he was reported as saying.

The restrictions in Tehran that had been lifted may have to be reimposed, according to the regime’s Deputy Health Minister.

Other regional reports are listed briefly below:

The society of Iran’s Medical Group Association, which has 170 regional medical associations affiliated, delivered a strongly worded statement aimed at the regime, stating that “the country’s medical community recommends to the Government, managers, and planners to spend the country’s strategic resources at the expense of closing their eyes to many other expenditures and interests to confront this sinister calamity such that in the face of the probable storm that looms ahead, they would not regret abandoning their ethical responsibilities.”

Mrs. Maryam Rajavi is the President-elect of the National Council of Resistance of Iran’s (NCRI):

Hail to the protesting nurses in Mashhad, and all the physicians, nurses, and medical staff who have risked their own lives to save the lives of patients…

The clerical regime has plundered our nation for 4 decades, wasting their wealth on nuclear and missile projects and on terrorism. Despite their selfless and proficient physicians and nurses, our people remain defenseless in the face of the pandemic.