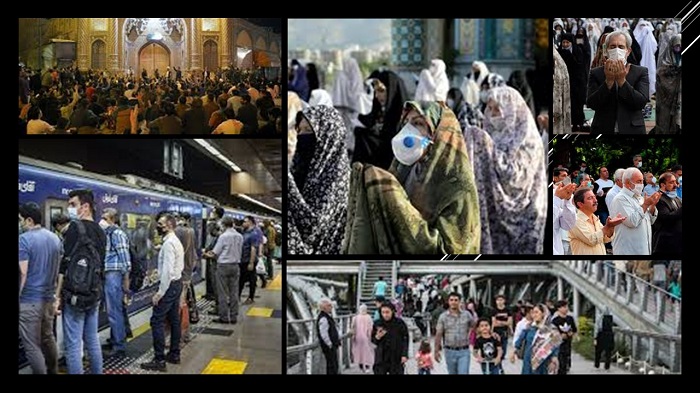 The Iranian regime knows it has mismanaged the Covid-19 pandemic from day one. But as the situation got worse but nothing was done all the regime could try to conceal its failure. They had the first cases in late January but refused to admit it.

One of the reasons was that elections were due and they wanted all Iranians to participate so they could guarantee to hold the seat of power. Also, the anniversary of the current regime was due as well.

Once these two events were over Covid-19 was widely spread with no checks to stop more transmission. All the regime could do was tamper with the true fatalities from the Covid-19 virus so that people would remain calm. Currently, the regime is revealing a death toll of allegedly around 7,500. This is just a drop in the ocean when it comes to the true statistics according to the National Council of Resistance of Iran (NCRI) when by the end of May it exceeded 48,200. This higher figure is due to reliable figures provided by anyone involved with the care of Covid-19 victims. Many of these whistleblowers are threatening their freedom by revealing the truth.

Assessment of hospitals’ experts puts the real number of fatalities in #Iran at 12 to 14 percent of those infected. This is while official statistics put that number around 5%, which is much lower than other parts of the world.https://t.co/eH8enPHT8d#MEK #COVID19 @USAdarFarsi pic.twitter.com/HPGVXOVpta

High penalties for revealing the truth about COVID-19

Back in March, the judiciary stated that anyone criticizing the official figures published by the regime could face arrest with potential penalties of flogging and a three-year prison term. By the middle of last month, 300 would be prosecuted for undermining the regime’s demands.

The People’s Mojahedin Organization of Iran (PMOI/MEK Iran) and NCRI, which are the leading source of opposition to the theocratic dictatorship believe if their members are caught telling the truth will face long prison sentences.

Rouhani believes that the increase in Covid-19 is the people’s fault for not heading advice to protect themselves from the virus. In reality, this is passing the buck as it is the regime that holds the money and equipment to stem the spread of the deadly virus.

However, Rouhani could get the security forces and the Islamic Revolutionary Guard Corps to start crackdowns pretending that this will help curb the threat from Covid-19. With the funding, the IGRC is getting it is pursuing (PMOI/MEK) activists after Khamenei had spoken that this resistance organization was going to be a significant threat to the regime’s present stranglehold over the country.

Over 48,200 people have died of the novel #coronavirus in 323 cities checkered across all of #Iran’s 31 provinces, according to reports tallied by the Iranian opposition PMOI/MEK as of Sunday afternoon local time, May 31.https://t.co/nHvXackqdP

According to the NCRI, the Iranian resistance has had to bear the brunt of a recent surge in arrests and interrogations.  Some detainees have been questioned about their relationship and political leaning towards the Iranian resistance movement. The regime is increasingly concerned about more nationwide uprisings, similar to those which took place in January 2018 and the other in November 2019 where the (PMOI/MEK) has been increasing the number of its active supporters than the effects of Covid-19 on the people.

The poor handling of Covid-19 by the regime is starting to shift support towards the resistance movement (PMOI/MEK) and away from the corrupt regime. In the end, the regime could be overthrown which will lead to better lives for all Iranians after the mess created by Covid-19 is finally cleared up.