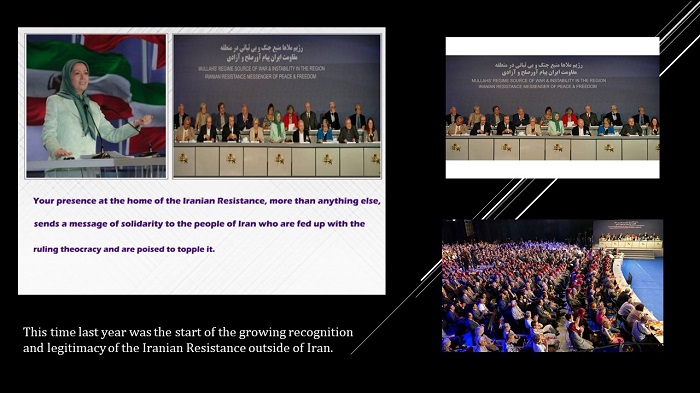 This time last year was the start of the growing recognition and legitimacy of the Iranian Resistance outside of Iran, the National Council of Resistance of Iran (NCRI) and the People’s Mojahedin Organization of Iran (PMOI / MEK Iran).

The Free Iran Summit took place which was attended by at least 350 dignitaries from 47 countries. It took place in Ashraf-3 in Albania which had become the new home of thousands of Mujahedeen-e-Khalq (PMOI / MEK Iran) members.

Great March towards Freedom, is a new book compiling a selection of Maryam Rajavi’s messages and speeches to Free #Iran rallies and gatherings at Ashraf 3 in June and July 2019 #FreeIran2020 https://t.co/4rh7mVwxMz pic.twitter.com/bGRz1YnNti

Since this significant event at the end of June 2019, there has been a rise in uprisings in Iran which has shaken the foundations of the mullahs’ despotic rule. The demands that were heard at demonstrations that took place in January 2020, November 2019, and January 2018 were to overthrow the religious dictatorship and it was the youth and women who were at the forefront of these demands.

The mullahs responded to these demands with nothing less than cruel suppression that led to 1,500 protesters losing their lives in the November uprising. As this sort of repression continued, the regime’s economy was starting to become weaker and weaker and it is now more or less bankrupt.

From the very beginning of the COVID-19 outbreak, the regime never had any real intention of trying to contain it but just let it spread through the population. Iran has now turned out to be one of the world’s largest COVID-19 epicenters, where more than 70,000 Iranians have died of the virus according to the People’s Mojahedin Organization of Iran (PMOI / MEK Iran).

According to #MEK that the #coronavirus death toll in #Iran is more than 70,800. This is not surprising given the regime’s cover-up of the scale of the problem. https://t.co/Gv8fj4wPeG#Iranian #FreeIran2020 @USAdarFarsi pic.twitter.com/wpurxC49zi

The regime tried to cover up the massive death toll and downplay the crisis but it fell on deaf ears. The mullahs calculated that the country’s 1st and then 2nd COVID-19 outbreaks would lower the public’s grievances toward the oppressive regime as they started to put their health first. This hasn’t happened and now the people are even more bitter towards the regime’s handling of the health emergency.

Iran’s Supreme Leader, Ali Khamenei, has stated that the (PMOI / MEK Iran) and MEK resistance units have instigated the recent uprisings and now they have become a real threat to the regime. In response to this, the regime has tried to demonize the (PMOI / MEK Iran) as a viable alternative and has tried to target the growing support the MEK has amongst mainly Iran’s youth.

One of the tactics the terrorist regime has been using is arresting numerous MEK supporters and even award-winning students. Their charges are supporting the MEK which is an organization that promotes freedom and democracy in Iran which is an essential component of any society but is dismissed by the current religious fundamentalist regime.

Even overseas the regime has been meddling in the affairs of other countries bringing about setbacks to Iraq, Lebanon, Syria, and Yemen, but now the pro-Tehran proxy forces are beginning to weaken at a fast rate.