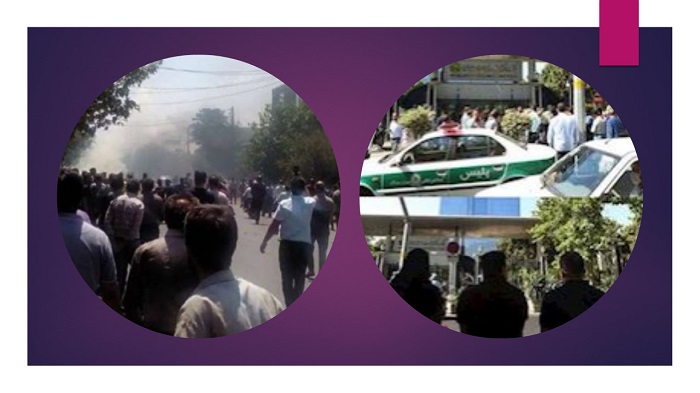 Anti-riot forces were dispatched to a rally outside Tehran’s Central Bank on Saturday, June 14th as a large group of investors demanded funds were returned to them after a change in the exchange rate was devised for businesses.

The decision to send in anti-riot forces is a sign that the regime is getting nervous about the spate of recent protests and the possibility that they could lead to an uprising.

According to the protesting investors, a combination of embezzlement and inefficiency in the NIMA system is the root cause of their losses.

Authorities immediately dispatched anti-riots to the scene in fear of any escalation.

This is by no means the only protest going on across Iran. In Dayyer of Bushehr province, dhow owners and sailors gathered to protest measures introduced to make it difficult for goods to be unloaded so that the boats could depart for other ports. “We want nothing but the right to work and provide food for our families” was seen written on a placard carried at the protest.

At the Education Ministry building in Tehran, part-time teachers and kindergarten educators gathered to protest about their jobs that they said had left them in limbo. The educators had come from several different provinces for the protest.

In Ahvaz, municipal workers gathered outside the Karun Municipality of Khuzestan province building protesting about paychecks and pensions being delayed from the contractor they worked for.

In Tehran, a group of people protested against a decision by the Ministry of Industries, Mining, and Trade that favored a company from whom they had pre-purchased Azvico MG360 vehicles. The protestors say that they have not yet received their vehicles and are $200 million short. 5,000 families have apparently been deceived, according to the protestors. They are speculating that the money they gave for the vehicles has already disappeared from the country and ended up in foreign bank accounts.

A member of the National Covid-19 Task Force, Mohammad Reza Mahboub-Far, has sounded pout a warning that the country is likely to witness a new wave of protests like the ones in2017 and 2019, but on an even larger scale.

According to the statement by People’s Mojahedin Organization of Iran (PMOI / MEK Iran) on June 15, 2020, that the Coronavirus death toll in 332 cities across Iran has risen to more than 52,100.

On June 13th in an interview with the state-run Jahan-e San’at, Mahboub-Far said that “the country’s economic and financial conditions during the novel coronavirus era is showing social impact inside our society. Honor killings and a series of suicides across the country are just a small portion of COVID-19’s social consequences.”

These sorts of issues can easily lead to a return of protests on the scale of 2017 and 2019 and become even more violent, according to Mahboub-Far. “If there were four provinces in utterly poor economic conditions back in early 2019, this time around nearly the entire country will be facing financial and economic crises,”

Iranian uprising will certainly lead to the overthrow of the Mullahs Regime, with the help of the MEK resistance units across Iran, to organizing the protests and breaking the Regime’s atmosphere of fear and reparations.

Mullah’s regime officials, including Ali Khamenei, have repeatedly admitted that the MEK is responsible for the protests and expressed fear that this could well mean the end of the Regime.