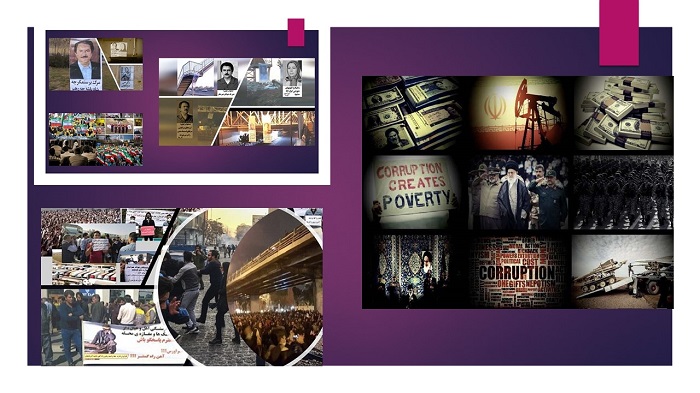 The Iranian Resistance Units, part of the People’s Mojahedin Organization of Iran (PMOI / MEK Iran), continued with militant activities from June 26th to June 24th throughout the nation. The activities took place in the following cities:

The propaganda the Resistance Units used was posting banners and graffitiing bravely in public places. The messages were slogans related to the Iranian Resistance leader, Massoud Rajavi, and the NCRI president Mrs. Maryam Rajavi. These are the slogans:

On June 25th, the militant youths burned down a fundamentalist center in the holy city of Qom.

Background of the resistance movement

Massoud Rajavi’s strategy for the “resistance units” in Iran was to create units within Iranian society and forge a bond between the resistance units and the country’s rank and file so that the later would become the core of the (PMOI / MEK Iran).

The (PMOI / MEK Iran) and the well-prepared Iranian resistance movement are coming steps closer to overthrowing the mullahs’ regime. These units have played an important role in the December 2017 and November 2019 nationwide uprisings of December 2017 and November 2019 that scared the regime. This younger generation is in addition to the 120,000 (PMOI / MEK Iran) members, many who have now lost their lives in their fight for freedom over 40 years. They are now closer to their goal of overthrowing the current regime.

The way the regime has treated the COVID-19 pandemic has given these determined men and women even more reason to establish freedom, democracy, and universal suffrage in Iran. It has reached the point now that many of Iran’s officials and the regime’s state-run media acknowledge the key role of the (PMOI / MEK Iran) and its Resistance units in the November 2019 protests.

Statements made by the regime’s forces

The IRGC’s paramilitary Bassij force head, Gholamreza Soleimani, recently admitted that “The (PMOI / MEK Iran) has cells (units) in our country. And in other countries, too, agents and the (PMOI / MEK Iran) who are tied to America damage the public’s interests.”

The overthrow of the clerical regime is the firm demand of the people of #Iran. The protests in Nov. 2019 & Jan. 2020 represented their burning desire to do so. With their strikes and the activities of Resistance Units, they move closer every day to this goal. #FreeIran2020 pic.twitter.com/EL782MF3n0

The Mehr news agency added to this by saying Sharif  ‘’pointed to the fact that the rioters were trained, equipped and organized by the (PMOI / MEK Iran) to plot against the country and said: ‘These people carry out tangible activities both in the realm of the soft war and cultural warfare, as well as in the area of inciting insecurity.”‘

The Secretary for the Supreme National Security Council Ali Shamkhani said “I believe 34 (PMOI / MEK Iran) members have been arrested so far. A vast network of individuals, operating not under the MEK’s name, but pursuing their line and modus operandi, were also identified.”

People’s Mojahedin Organization of Iran #PMOI / #MEK sources inside Iran report that people across Iran have held protests over the past few weeks growing role and its resilient Resistance Units across #Iranhttps://t.co/o0tskv2SlP #IRGCTerrorWithoutBorders #Iranian @USAdarFarsi pic.twitter.com/8sxnnUMvFR