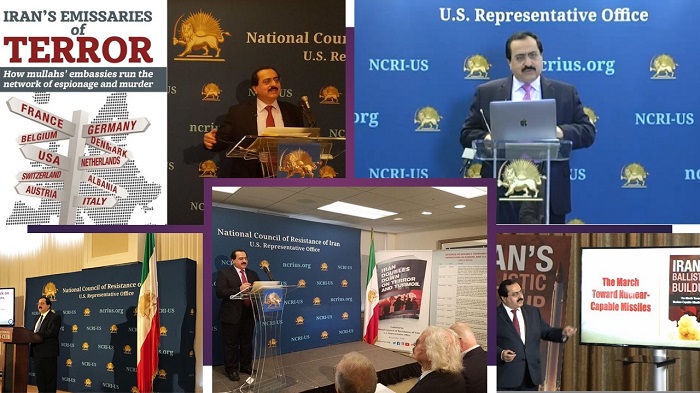 Everywhere in the world, the governments are united with the people to fight the COVID-19, in Iran, the regime is united with COVID-19 to fight the people. Tehran’s plan since day one was to use the pandemic to put down the fire of the uprisings and protests all across the country.

While Supreme Leader Ali Khamenei has hundreds of billions of dollars under his control, the regime spends none of that to help the people, instead, they want to use the pandemic as a tool to lift the sanctions on the regime.

Our movement is putting out a daily report about the casualties of the pandemic and has released numerous reports and documents on this matter. This is one of the reports among dozens we have released on the COVID-19 and the Iranian regime’s mishandling of it. Externally, the Iranian regime has stepped up terror in Europe and the U.S., continues to threaten its neighboring countries, and maintains its ambitious nuclear and missile program.

The priority for spending the resources of the country has been and remains to be funding terror, supporting proxies, intervening in the region, and developing nuclear and missile programs. We will hear more about all that from other members of the panel.

None of these rogue behaviors and policies are supported by the Iranian people. Instead, people have been chanting “Leave Syria alone; think about us,” or chanting, “Neither Gaza nor Lebanon, I give my life for Iran.” And after COVID-19 people are even more opposed to external aggression of the Iranian regime because the money that needs to be spent in Iran for education, healthcare, and welfare, is instead used to support foreign mercenaries. The Iranian regime pays terrorist Qods Force mercenaries five times more than Iranian nurses.

One of the regime’s officials said last month that Tehran gave Asad 30 billion dollars, and this is in addition to what they have spent with the Qods Force proxies. So, the regime’s terrorism, proxy war, nuclear and missile program, and its dangerous maneuvers in the region is rejected by the Iranian people and not just the international community.

And it is the Iranian people that first and foremost benefit from an end to the Iranian regime’s presence and influence in the region. Concluding remarks:

The question is what is a comprehensive response to all of the threats posed by the Iranian regime.

Just because the regime has lasted for over 40 years, does not mean that it is invincible. The fact is that there is a tremendous opportunity for the Iranian people to change this regime and for the U.S. and others speed up the process, without a need for boots on the ground.

2) COVID-19 which temporarily put a lead on the uprisings has had a diminishing effect, people now have one more reason to overthrow the regime. The pandemic proved that this regime cannot solve any problems.

3) The supreme leader, Ali Khamenei, and all other senior officials of the regime have repeatedly talked about the danger of another wave of the uprising and that they may not survive the next ones.

In the height of the pandemic, the regime arrested 2 elite award-winning students of the Sharif University of Technology, which is referred to as the MIT of Iran, was arrested last month, because of what the Judiciary said was their ties with the main Iranian opposition the MEK, and their Resistance Units in Iran which is involved in organizing and leading protests against the regime.

18 others had been arrested recently under similar charges. In the past two years, the European countries expelled 7 “diplomats,” jailed another one; U.S. arrested 2 MOIS agents in the U.S. charged with spying on the officials of the NCRI, in what the Justice Department complaint described as capture and kill operations, and they are in jail now.

Of these 10 regime officials and agents, 8 of them were arrested in connection to plots against the NCRI and its member organizations. This clearly shows that Tehran’s main preoccupation is to stay in power and it sees this movement as having the capability and intent to lead the movement for regime change.

4) The regime is extremely vulnerable internally and is facing major crises economically, politically, and socially. This regime is not 10 feet tall and can be brought down by the people and the organized opposition.

5) The stepped-up pressure on the Iranian regime has weakened the mullahs. Maximum pressure has worked. Snapback of all prior UN Security Council resolutions and sanctions associated with them is the way to go.

6) There is only one solution that can end the entire threat of the Iranian regime. That is the responsibility of the Iranian people and the organized resistance.