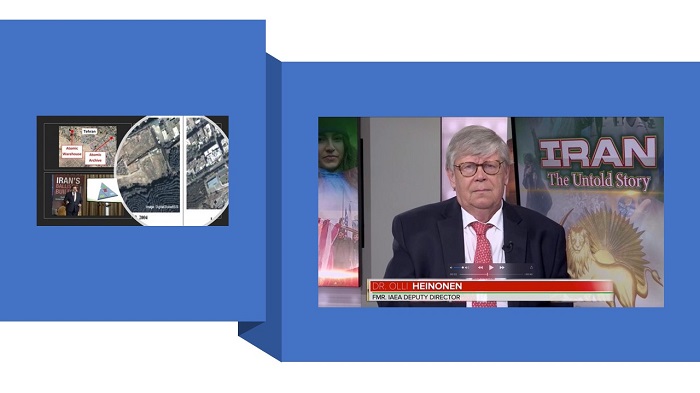 Transcript of remarks by Dr. Olli Heinonen, Distinguished fellow at the Stimson Center, Former deputy director-general of the IAEA, and head of its Department of Safeguards, at June 3, 2020 panel organized by the National Council of Resistance of Iran, U.S. Representative Office (NCRI-US) on the growing threat from Iran’s regime.

Alireza Jafarzadeh: Thank you so much, John. You gave a very impressive overview, covering most of the aspects of the rogue behavior of the Iran regime when it comes to the region, their support for the militias in the region, their missile program, and how the regime has continued to up the ante.

And you also talked about the partnership with those who want to see a different Iran. And, of course, the best partner would be the people of Iran, as you alluded to, that in your remarks said those are the ones who have been in the streets chanting death to the ayatollahs and wanting change. And you also highlighted that the maximum pressure policy of the US is working and that needs to be maintained. I’m sure there are a lot of other things.

I see some journalists have already signed in to register. They will have lots of questions for you later on. Now, let me turn to another aspect of the threat of the Iran regime, which is very significant, and that’s the nuclear weapons program of the ayatollahs. And the best person that can give us the latest assessment on that is Dr. Olli Heinonen and as I said, he’s been with the agency for 27 years. When we first exposed the nuclear sites in Natanz and Arak on August 14, 2002, it was Olli who immediately wrote a letter requesting to visit, to have access, to those sites, I guess, on the same day. And then when the first delegation went to Iran, he was right there. So Olli, please share your thoughts with us about the nuclear weapons program of Iran.

Great remarks today by Hon. John Rood, Amb. Robert Joseph, Amb. Joseph DeTrani, and Dr. Olli Heinonen who joined my on @NCRIUS panel to discuss the Iranian threat and how to counter it. Of course the solutions is the overthrow of the regime by the Iranian people. watch here. https://t.co/s6flBSjyum

But there will be also another report of interest. And this is the report by the facilitator of the U.N. Security Council. The report is due by June 23 and the Council will debate it on the 30th of June. And this report will also include other aspects of the JCPOA and undertake the case of Iran, such as any embargoes related to arms transfers, missile tests, and ballistic missile development.

But let me start with the IAEA report. The reports in March, the JCOPA, and the safeguard report, they both showed that Iran is in breach of its obligations under those agreements. Under the JCPOA, as we know, when the U.S. withdrew two years ago, Iran said a year ago that it will not honor any or all its commitments and has gradually boosted its uranium enrichment capabilities.

The March report showed that Iran has not only increased the number of centrifuges but produced about one ton of low enriched uranium, enriched up to 4.5 percent. This amount is actually enough to make one nuclear device if Iran wants to enrich it further to the level of 90 percent.

The upcoming report, after two to three months of work, will show most likely that Iran has now a stock of low enriched uranium, which is sufficient for two to three nuclear weapons. At the same time, Iran has installed additional centrifuges and is testing new models of centrifuges. Perhaps we should not be overly excited about the testing of IR7s, 8s, and 9s because it will take several years before those can be fielded.

But what is the matter of concern is the stock of IR2 and IR4 centrifuges, which Iran has probably thousands of them or can assemble thousands of them. If you compare, just take those two thousand IR2M’s which were installed in 2015 when the JCPOA was concluded. Under the JCPOA Iran had to dismantle those and that took place. But they can be put quickly back. Those centrifuges are up to four times more powerful than the IR1s.

So those two thousand centrifuges if installed will double the Iranian enrichment capacity and at the same time, it will bring out the breakout time, the time that it takes to produce highly enriched uranium for a nuclear weapon from this 5 percent or 4.5 percent enriched uranium stock to half. It will be only perhaps two, three months. And this is certainly a matter of concern to the international community.

The other things which are of concern are related to these atomic archives, which were revealed in 2018. This material was presented to the IAEA, and I have also had the opportunity to study some of it. They indicate that Iran has not dismantled its nuclear weapons-related R&D. Why?

First of all, why to keep those documents stored in that warehousing in Tehran. The second thing, what happened with this equipment, which was brought to Turquz Abad, which also showed some contamination of natural uranium particles, which is an indication that there might be some undeclared nuclear material in Iran. If that is the case, and IAEA has been pursuing it vigorously for more than one year, and Iran has not provided access to that equipment or provided any plausible explanation for the contamination.

This means, in two ways, that Iran is in noncompliance with its comprehensive safeguard agreement it has concluded under the Non-Proliferation Treaty, namely, does not provide the access to the locations upon the request of the IAEA. The IAEA has that access right under the additional protocol and has not. And at the same time, Iran is most likely having undeclared uranium in its possession.

So, these are serious things. And IAEA board is meeting in one and a half weeks, and it is time for the board to take decisive action to bring Iran back to the compliance. Then Security Council will deal with some of the other aspects which are not related directly to the nuclear issue, namely their missile and the arms embargo. But I leave those things for the other participants to address.

But it appears to me that also in that area, Iran might be in breach of its obligations. So now the international community is having two important meetings. This could be a threshold or where the international community has to decide whether to call harder to get Iran into compliance and have a diplomatic approach which will make it clear for Iran that this cannot continue.

Why this is also so important? As Mr. Jafarzadeh said, the Iranian noncompliance was exposed in August of 2002 for the first time. Since that date, there is no one day that Iran has been in full compliance with its nuclear obligations under the NPT safeguards agreement. I don’t think that the international verification regime should tolerate such behavior. That is also in the interest of Iran. I don’t think it’s in the interest of Iran if the IAEA is not allowed to do its proper job in its neighboring countries. So, I finish with that.

The Iranian main opposition to the Iranian regime, the National Council of Resistance of Iran (NCRI) through the reports provided by the People’s Mojahedin Organization of Iran (PMOI / MEK Iran) on 2002 has made the international community aware of the intentions of the Iranian regime to build nuclear weapons capability.