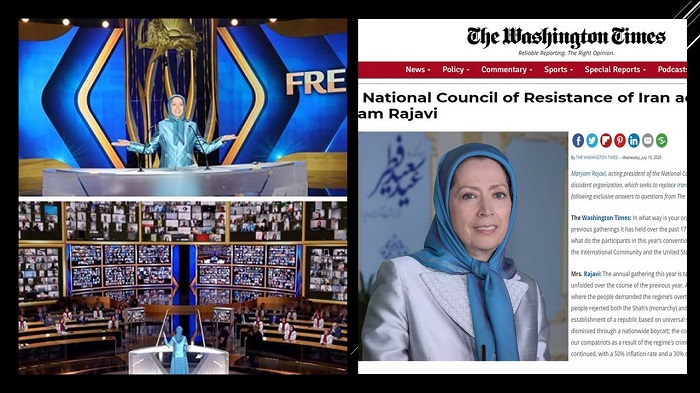 Friday the 17th of July 2020 was an important day in Iran’s history because the world’s biggest Iranian dissident organization held its annual global summit.

It has taken a sensible approach by making the event virtual so it doesn’t have any problem with social distancing. This allowed them to connect far more easily with its millions of supporters throughout 100 countries. The call at the event was for the current theocracy to be replaced by a democratically elected government.

The organizers of this event, the National Council of Resistance of Iran (NCRI) and its associate group, the People’s Mujahedeen of Iran (PMOI / MEK Iran), hoping to initiate a wake-up call for Iran’s supreme leader, Ayatollah Ali Khamenei.

A recent statement issued to the Washington Times by Maryam Rajavi, acting NCRI president, states that the Iranian regime has been unsuccessful in eliminating the Iranian resistance movement and now it is in the best position to unseat the regime.

The main form of communication was the app “Zoom,” which was available in 30,000 locations. The conference has also been viewed on YouTube, Facebook, Twitter and Instagram, and live-streaming HD TV. The conference was open to anyone, anywhere, Ali Safavi, a member of the council’s foreign affairs committee, told the Washington Times.

We have pledged to restore our people’s freedoms and rights. We make this pledge before the Iranian people and history. This is our pledge to 120,000 martyrs who fell for freedom #FreeIran2020 #Iranhttps://t.co/yn3DPldNUR pic.twitter.com/arrIZWdLcC

The Free Iran Global Summit has been launched at 9:30 a.m. EDT on Friday. A number of key Western cities will have been hosts for viewing gatherings on HD TV, which are:

Anyone who decided to view the summit using the internet has been able to listen to key Americans from the two political parties who have long advocated a change in the regime in Iran.

Mrs. Rajavi has stated that “a message to the Iranian people that the MEK and the resistance, particularly the MEK resistance units inside Iran, are standing with them and are supporting their uprising to overthrow the theocracy and to win ultimate victory while standing shoulder to shoulder with each other.”

The NCRI upholds that the Iranian government is concerned about the MEK’s growth among young people who have been involved in protests last year and this year. It has aired a video that showed how much support there is in Iran for the resistance movement and all it has accomplished in recent years by MEK resistance cells within the country.

On Wednesday last week in Antwerp, Belgium, 4 Iranians, including a diplomat, faced criminal charges for conspiring in a 2018 bomb plot at the resistance’s annual summit in Paris which attracts an attendance of more than 100,000 people. The NCRI said in a statement that it believed that terrorist bombing was initiated by the regime’s Supreme National Security Council and was approved by the Supreme Leader, Ali Khamenei.

Mrs. Rajavi also told the Times that she thinks that the 2018 bombing was a direct attempt to target her and other senior European and American public figures. She said that if the bombing had been successful it would have been the deadliest terrorist attack to take place in Europe.

Due to sanctions by the United States, both the regime and the economy have not been doing well, which has led to young Iranians taking to the streets to protest about lack of freedom and jobs. During these protests, at least 1,500 were killed and amongst them were women and children.

The whole situation in Iran has been made worse by the COVID-19 outbreak, which has been managed badly by the regime. It has led, according to the MEK, to at least 72,000 deaths.

What has always had Donald Trump and his administration most concerned was the Obama administration’s 3-year-old nuclear deal which in May 2018 was halted and replaced by more economic sanctions to help to stop up a build-up of Iran’s nuclear capability. According to Mrs. Rajavi, these sorts of changes have meant that the regime has weakened its grip on the Iranian people so an overthrow of the regime is more imminent.

Mr. Trump is at this time lobbying the United Nations to extend the arms embargo so that there would be limitations on Iran’s ability to support various proxy fighters in Yemen, Iraq, Syria, and Lebanon.