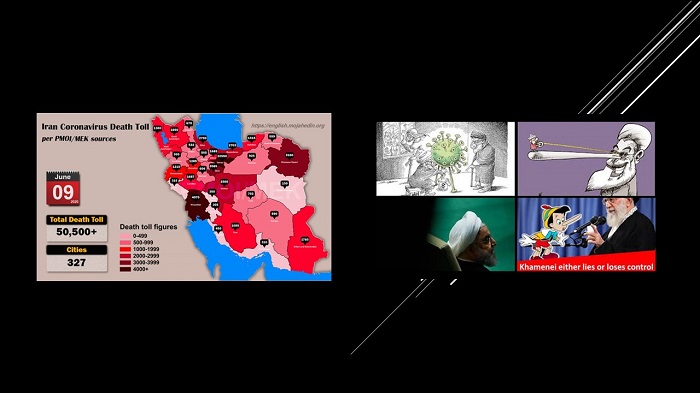 Iranian President Hassan Rouhani acknowledged on Saturday that the regime has failed to confront the coronavirus crisis and is now abandoning all of its limited efforts to contain the virus by insisting that factories be active, shops are open, and people move around freely.

Meanwhile, the People’s Mojahedin Organization of Iran (PMOI / MEK Iran) reports that over 50,500 people have died from the virus in Iran. The regime is trying to suppress the statistics to make themselves look better and so only report just over 8,000 deaths, which would put them in a better position than many countries with smaller populations and better access to healthcare.

More than 50,500 people have died of the novel #coronavirus in 327 cities checkered across all of #Iran‘s 31 provinces, according to the Iranian opposition PMOI/MEK. pic.twitter.com/4MIajXZfL0

It’s not just the coronavirus that the (PMOI / MEK Iran) is revealing more information about to ruin the regime’s propaganda campaign.

Interior Minister Abdolreza Rahmani Fazli has tried to claim that only 200-250 people were killed during the regime’s brutal crackdown on the November uprising over the gas price hike, with some of these killed by protesters. The (PMOI / MEK Iran) reported that over 1,500 were killed by security forces, not to mention those who died under torture or because they did not seek medical care for fear of arrest, with no one killed by protesters. The (PMOI / MEK Iran) figures have been confirmed by Reuters and the US State Department.

Thousands of banners and posters have been erected across many of Iran’s cities in recent days by supporters of the #PMOI #MEK #Iran The messages were from the leaders of the main opposition movement in Iran, #NCRIhttps://t.co/ZxGIOL0R6v #Iranian #coronavirus @USAdarFarsi pic.twitter.com/gs41y3X4VD