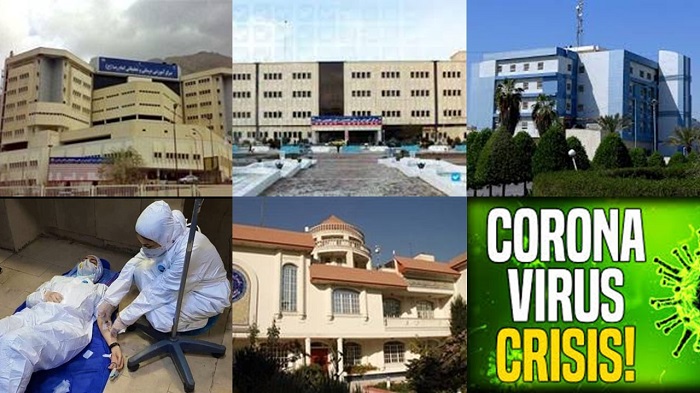 The second wave of Covid-19 seems to be engulfing Iran. Over 49,000 deaths have now been reported by the Iranian opposition People’s Mojahedin Organization of Iran (PMOI/MEK Iran), based on figures supplied to them across 31 of Iran’s provinces and 325 of its cities.

As has been reported many times before, the official figures given to the World Health Organization (WHO) by the regime are far lower, at 8,012.

Some provincial fatality figures reported include:

Over 49,000 people have died of the novel #coronavirus in 325 cities checkered across all of #Iran’s 31 provinces, according to reports tallied by the Iranian opposition PMOI/MEK as of Wednesday afternoon local time, June 3.https://t.co/dkf0alYNp9

Alireza Zali, Tehran’s Covid-19 Taskforce head, has reported that there were 261more patients in hospital and 73 in ICU in the last 24 hours.

The situation in Kermanshah, in Western Iran, is particularly grim. The number of people entering the hospital every day there is over 240 according to the head of the Kermanshah Medical Sciences University Public Relations Committee. These figures are approaching the sort of numbers hospitalized in Tehran, a city with far more residents.

According to the state-run Ruidad24 website, there were 658 new cases and 16 fatalities in the last 24 hours alone in Khuzestan province. The figures were supplied by Ahvaz Medical Sciences University.

Health authorities across cities in #Iran are now warning that this “second peak” of infections that has overwhelmed hospitals will worsen in the coming weeks.https://t.co/QpJXa0bMUg#Iranian #MEK #IRGCTerrorWithoutBorders #Iranian #coronavirus @USAdarFarsi pic.twitter.com/WlXLw0pusI

In Abadan, there were 53 new cases and 5 new deaths according to the city’s Abadan Medical Sciences University dean.

The state-run ISNA news agency reported more shocking news from the city of Shushtar. The caretaker of Shushtar Medical Sciences University reported that the city hospitals had more patients than ever admitted with the disease. It was admitted that a new wave of Covid-19 is pushing up the number of infections.

Bandar Abbas and Minab cities have both been designated as code red. The dean of Hormozgan Medical Sciences University said that hotels had to be requisitioned for use because hospitals had been overwhelmed. “From our perspective, the cities of Rudan and Qeshm are also red, alongside Haji-Abad and Bandar Khamir, which are under evaluation to be designated as code red areas,” he said. He also said that 123 medical staff had already contracted Covid-19.

Fars province is “alarming” following a sudden upsurge in infections, according to the Shiraz Medical Sciences University’s deputy dean as reported by the Fars news agency.

The deputy governor of Bushehr province was reported by IRNA as saying that the previous record of new infections had already been broken, with no sign of any easing off.

The bazaar in Iranshahr is to be shut down for 10 days according to its mayor because of the spread of the disease.

In Urmia Central prison, many prisoners have been experiencing the typical symptoms of Covid-19. Tests were only carried out recently after protests by the inmates. Those few that were selected for testing all had positive tests for the virus. The conditions in Urmia are very basic and do not allow prisoners to carry out proper hygiene. Even soap and sanitizer are lacking or sold at unaffordable prices.

The second wave of infections and the rising death toll is a clear indication that the regime has no hesitation in pursuing a brutal, callous policy that shows that the regime’s leaders appear to have no interest in saving the lives and health of their citizens.

Given the accelerating spread of the coronavirus across #Iran, prison conditions are alarming. I urge the UN Secretary General, Security Council, &other relevant international agencies to help stop a humanitarian catastrophe in the regime’s prisons.https://t.co/22TzwMZQES

The president-elect of the National Council of Resistance of Iran (NCRI), Mrs. Maryam Rajavi, said that it was the criminal actions of the regime that has been a direct cause of the human tragedy in Iran. She repeated her call for the UN Secretary-General and Security Council and other international bodies to intervene in Iran and stop the deadly conditions that exist in the country’s prisons. Mrs. Rajavi emphasized that the deaths in the prisons and their unsanitary conditions were a direct result of the actions of Supreme Leader Ali Khamenei and President Hassan Rouhani.