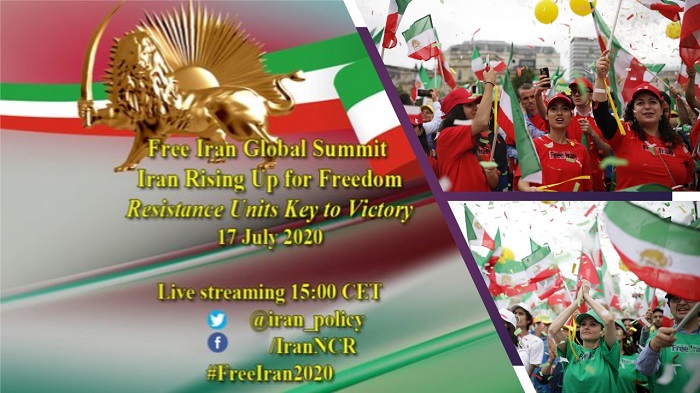 Thousands of supporters of the Iranian Resistance, The People’s Mojahedin Organization of Iran (PMOI / MEK Iran), as well as many other people who have concern for Iran will attend the online 2020 Free Iran Global Summit held on July 17th by the National Council of Resistance of Iran (NCRI).

A summit is an annual event, but this year it is held online because of the pandemic.

The core message of the summit will be an expose of the crisis in which the Iranian regime is currently in. and the likelihood that it will soon fall through its misjudgments and errors.

Iran today has had 40 years of institutionalized corruption and oppression, which have done nothing for the people of Iran but create misery. The result is that Ian has become a powder keg, ready to explode.

The most manifestation of Iranians’ discontent was the outpouring of protests and riots in November last year. The trigger, in this case, was the steep rise in fuel prices. The regime was shaken to its core by the calls for it to be removed.

Key centers of oppression identified by Iranian protestors were attacked. These included state-run or affiliated banks and gas stations, seminaries, and government centers. Those institutions most associated with the Islamic Revolutionary Guard Corps (IRGC) received special attention. Many buildings were attacked and damaged or destroyed.

The regime responded not by listening, but by brutally attacking protestors. Over 1,500 protestors were murdered by Iranian regime forces. 12,000 were arrested and imprisoned and 4,000 wounded. The Internet was blacked out during the protests by the regime who were running scared by the scale of the protests and the fact that the MEK resistance units were at the forefront of the action.

Although the brutal repression temporarily stopped the protests, they broke out again after the downing of the Ukrainian commercial passenger aircraft that left Tehran just after the targeted drone attack on Quds Commander Qassem Soleimani. Protestors, mainly student demonstrators, demanded the resignation and removal of the Supreme Leader Ali Khamenei and President Hassan Rouhani.

Despite the repression of this renewed protests, Iranians showed their discontent with the regime by boycotting the sham parliamentary elections that took place in February this year.

More than 64,800 people have died of the novel #coronavirus in 342 cities checkered across all of #Iran‘s 31 provinces, according to the Iranian opposition PMOI/MEK. pic.twitter.com/zqHp3CCiWM

Following the two huge nationwide protests, along came the Covid-19 pandemic which has shown yet again how incompetent the mullahs’ regime is. They have dealt with it so badly that 65,000 Iranians are now dead. The regime could have easily adopted a containment strategy that has been so successful in many other parts of the world but instead deliberately allowed the virus to spread throughout Iran. It is as if the regime has used the effects of Covid-19 as a way of oppressing the people of Iran even further.

It is not a strategy that is going to work, as it is simply going to be a catalyst that will propel Iranians into further uprisings. As one of the regime’s officials, Ahad Naderi, candidly admitted his concerns to the Resalat daily, a state-run news outlet: “I am worried about the social and security outcome of this crisis. Soon, rebellions, much larger than the ones in 2018 and 2019 will happen.”

The role of the Quds Force in Exporting Terrorism

One of the main objectives of the regime is not to further the interests of the Iranian people but to export terrorism in the Middle East, especially Iraq, Lebanon, Syria, and Yemen. This policy was struck a resounding blow when the Quds Force Commander, Qassem Soleimani, was killed in a drone strike in Iraq.

Iran has become a pariah state

The Iranian regime’s breaching of its agreements with international governments to limit its nuclear ambitions has resulted in international isolation. Maximum pressure by the U.S. has been exerted after the U.S. administration withdrew from the 2015 nuclear agreement, citing Iran’s failure to keep to its side of the deal.

The International Atomic Energy Agency (IAEA) has called on Iran to allow access to two suspected nuclear sites to its inspectors. It has demanded full cooperation from Iranian officials.

A bipartisan draft resolution passed last week in the U.S. House of Representatives “recognizes the rights of the Iranian people and their struggle to establish a democratic, secular, and non-nuclear republic of Iran.”

Free #Iran Global Summit on July 17: #Iranian Regime’s Fear of Overthrow by the People and the #MEK Resistance Units#FreeIran2020 https://t.co/lavyOXMhzQ

The U.S. is also pressing ahead with a draft resolution to the U.N. to ratify an extension to an arms embargo on Iran which is due to expire in October. The U.S. has a Plan B ready in case China and Russia veto the resolution.

The 2020 Global Free Iran Summit’s main message is that regime change is imminent in Iran. The regime is rotten to the core yet the democratic alternative is ready and waiting to replace it. The Summit will call on the international community to support the Iranian Resistance (NCRI) and the Iranian people in their struggle to remove the oppressive theocratic regime.