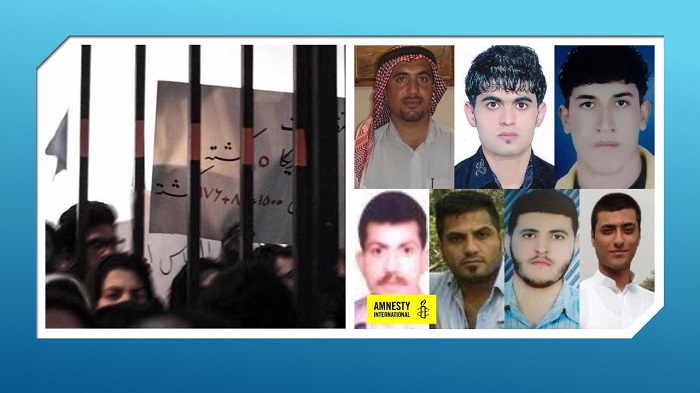 Many political prisoners on the ward four of notorious Evin Prison have contracted Coronavirus, exhibiting dry coughs, fevers, shivering, and diarrhea, but the Iran regime has refused to release them, quarantine them, or treat them. This means that they have essentially been condemned to death.

However, the horror story does not end there. The Iranian regime is terrified of an uprising that will overthrow them, so they are attempting to intimidate the public by conducting daily executions in various parts of the country during the Islamic holy month of Ramadan.

Since April 20, 2020, several prisoners have been hanged and were executed in Iran.

On April 23, Sadly, the Iranian regime executed seven prisoners in Gohardasht prison, two in Dastgerd-Isfahan, two in Shiraz, and one in Kermanshah, Zahedan, Sanandaj, Tabriz, and Khalkhal.

A Revolutionary Court in #Iran sentenced Mostafa Hashemzadeh to 5 years in prison, 74 lashes, 3 months of community service, a 2-year ban on entry to the uni’s dorm for taking part in protest against the regime’s downing of Ukrainian airliner, in Jan 2020.https://t.co/os6GONAabO pic.twitter.com/c3R6fY7F2z

On April 22, the mullahs executed juvenile prisoner Shayan Saeedpour, who was just 17 when he was arrested, for taking part in a prison break in Saqqez on March 27.

Mrs. Maryam Rajavi, the President-elect of the National Council of Resistance of Iran (NCRI), called on the international community, particularly, the Security Council, once again to stop the executions and secure the immediate and unconditional release of prisoners, particularly political prisoners.

She said: “Silence vis-à-vis the atrocities perpetrated in prisons by the clerical regime is tantamount to disregard for humanitarian principles for which humankind has offered millions of victims.”

The Iranian regime is trying to keep its shaky grasp on power so they cover-up the effect that the COVI-19 had on the country, hiding death and outbreak of the virus, telling people it was safe to go back to work, and reopening religious sites.

Mujahedin-e Khalq (MEK Iran) activists reported that on April 29, Brigadier General Abolfazl Shekarchi, the spokesman for the regime’s armed forces, announced that thousands of people who had posted information about the spread of COVID-19 in Iran have been arrested. The source of MEK Iran said that over 37,000 people have died in Iran so far.

Ali Khamenei, the Supreme Leader, and Hassan Rouhani, the mullah’s President, want to avoid another uprising over economic matters by telling people it is safe to go back to work, ensuring that many more Iranians will die. The people are not fooled. They won’t let the regime get away with this. All the Iran regime is doing with this suppression, of the facts and the people, is buying itself more time to shoot itself in the foot.