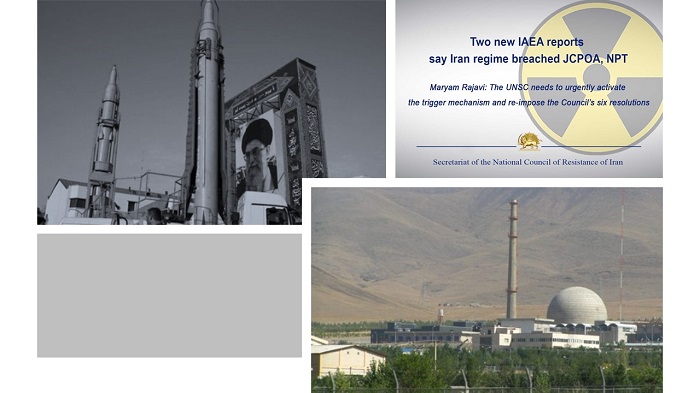 On June 19th, 2020 the Board of Governors of the IAEA, the U.N.’s nuclear watchdog, approved a resolution which had been proposed by France, Germany and the U.K. The 35 member board called on Iran to “fully cooperate with the Agency and satisfy the Agency’s requests without any further delay, including by providing prompt access to the locations specified by the Agency.”

In two separate reports to the Board of Governors by the IAEA, significant violations of the Joint Comprehensive Plan of Action (JCPOA) by the regime were noted. “As a result of its ongoing evaluations, the Agency identified a number of questions related to possible undeclared nuclear material and nuclear-related activities at three locations in Iran that had not been declared by Iran,” stated one of the reports.

In conclusion, the report went on to state that “for over four months, Iran has denied access to the Agency, under Article 4.b.(i) and Article 5.c. of the Additional Protocol, to two locations and, for almost a year, has not engaged in substantive discussions to clarify Agency questions related to possible undeclared nuclear material and nuclear-related activities in Iran.” The reports indicated that the regime’s behavior made it impossible to clarify what the regime was doing with its nuclear program and whether undeclared nuclear material had been stored at the two locations.

The President-elect of the National Council of Resistance (NCRI), Mrs. Maryam Rajavi, has welcomed the resolution adopted by the IAEA’s Board of Governors. She says that the regime has never given up its overall aim of developing an atomic bomb, even 5 years after the nuclear deal made with the P5 + 1 countries. “The regime uses all the facilities and concessions that the nuclear deal has given it to pursue terrorism, foreign warfare and domestic repression,” she says.

By: Alejo Vidal-Quadras#Iran: Negotiations like those that led to the #JCPOA will only encourage the mullahs to greet their adversaries with one hand and stab them in the back with the other. #Iranianshttps://t.co/Pl0n8hm4MT

Mrs. Rajavi went on to say that there were certain key objectives needed to prevent the mullahs’ variety of religious fascism acquiring nuclear bomb-making capability. These were:

Mrs. Maryam Rajavi, On January 6, 2020, described the decision by the Mullahs regime not to abide by “restrictions in the number of centrifuges, the capacity, percent, and level of enriched uranium and research and development,” in its nuclear program as a practical departure from the Iran nuclear deal. She underscored the imperative and urgency of activating the trigger mechanism and reinstating six United Nations Security Council resolutions against the regime and added that the anti-human regime used all benefits and concessions from the JCPOA to further export terrorism and warmongering abroad and carry out suppression at home.

The National Council of Resistance of Iran (NCRI) and People’s Mojahedin Organization of Iran (PMOI / MEK Iran) has said many times that Iran has many resources and has no need for nuclear power. Mullah’s regime’s aim is to have nuclear bombs.

The #IAEA resolution proves what we already knew: Tehran never abandoned its nuclear weapons program despite the #JCPOA. This regime should’ve never been allowed any enrichment capabilities, nor provided any ability to do nuclear-related research & development under any pretexts. https://t.co/ratCTs1xub