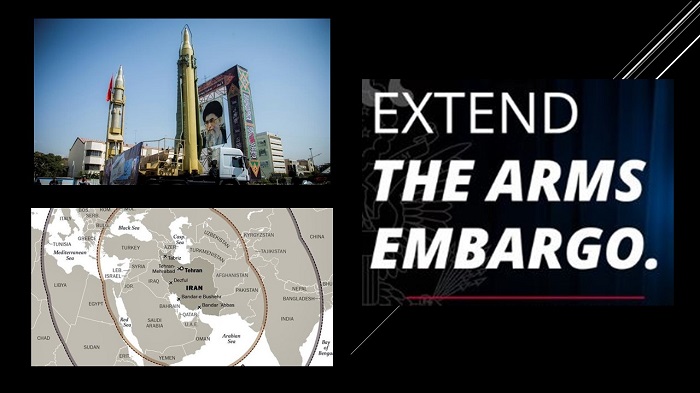 The US administration is currently trying to gain support for renewing an embargo on the sale of weapons to Iran. The administration aims to put indefinite limits on the regime’s activities to make it change its behavior.

Iran has repeatedly violated the arms embargo. The Security Council must act to exert greater pressure on Iran, not less. At no point in the last decade has Iran’s behavior shown it would be appropriate to lift the arms embargo. https://t.co/xMM7QFztyw

Secretary of State Mike Pompeo told reporters last week that the United States, although it has pulled out of the Joint Comprehensive Plan of Action (JCPOA), or 2015 Iran nuclear deal as it is more commonly known, it is still listed as a participant. Secretary Pompeo emphasized that the United States does not need the consent of any other countries to keep the arms embargo in place.

Secretary Pompeo also reiterated that a short-term embargo extension is not sufficient.

At the beginning of 2020, the Iranian regime stopped abiding by the nuclear enrichment stockpiles and purity levels limits that are in place. This was Iran’s retaliation after failing to blackmail the European signatories of the JCPOA into taking measures that would compensate for the sanctions that the United States re-imposed when it exited the agreement.

#Iran: Despite Obstacles, US Accelerates Push for Longer Arms Embargo on Iran’s Regimehttps://t.co/w5cWLMSAha

The European signatories of the deal initiated the dispute resolution mechanism but, for now, have kept the deal intact.

The Trump administration is growing increasingly frustrated at the Iranian regime’s belligerence and the lack of action taken by the remaining signatories of the deal. Thus, the Trump administration has been investigating unilateral options. It is looking unlikely that anything useful will come of this given the fact that most of the remaining signatories wield veto power with the UN Security Council. Furthermore, Russia and China are particularly against the US when it comes to the United States’ policy towards Iran.

The Iranian regime is getting weaker and weaker and the economic sanctions, and now the Coronavirus outbreak, have dramatically affected the regime’s ability to fund various proxy groups and militias across the region. The arms embargo may be the final blow for the regime.

Javad Zarif, Iran’s Foreign Minister, reminded the signatories that the nuclear deal guarantees the expiration of the embargo. This is no doubt a plea, or a warning to the European signatories, that it must not allow the embargo to renew. However, Zarif’s reminder serves as an indication of the regime’s desperation. It is facing crises on all fronts and it is clear the regime’s survival is hanging by a thread.

At home, the people are more determined than ever to see the regime collapse. Society has been described as being in a powder keg state and it is clear that another uprising is brewing. Its inevitable demise could be precipitated by international pressure, just as much as the domestic pressure.

Supporters of the People’s Mojahedin Organization of Iran (PMOI / MEK Iran) inside Iran, who are members of the Resistance Units have continued their defiance of the regime against all odds during November and December uprising, spreading the message of resistance against the regime. These people are risking their lives, because the mullahs’ regime is currently in the midst of a crackdown on all resistance efforts, with MEK sources confirming that at least 1,500 have died, 4,000 injured, and 12,000 arrested, during the last uprising.

Mrs. Maryam Rajavi the President-elect of the National Council of Resistance of Iran’s (NCRI): The clerical regime has plundered our nation for 4 decades, wasting their wealth on nuclear and missile projects and on terrorism.

Message to the conference at the Parliament of Italy in support of the #Iran uprising #IranProtests #StopIranBloodshedhttps://t.co/HAD1C4RBVZ pic.twitter.com/GzbLi6jhFY