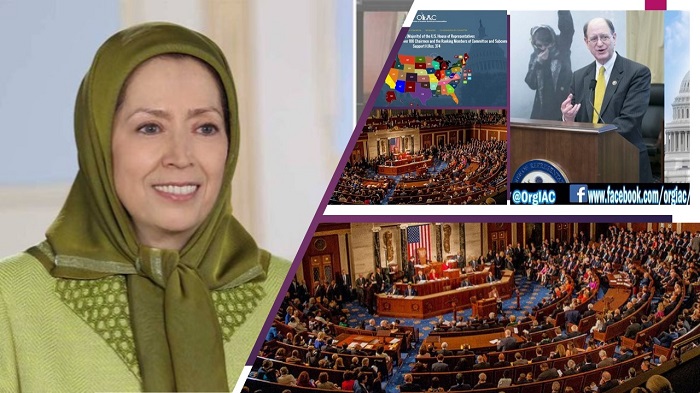 Mrs. Maryam Rajavi, President-elect of the National Council of Resistance of Iran (NCRI), the main opposition to the Iranian regime, spoke about the new resolution that was presented to the United States government a few days ago.

House Resolution 374 is a condemnation of the Iranian regime’s belligerence, in particular, its terrorist plots against the Iranian opposition movement, the Mujahedin-e Khalq (PMOI / MEK Iran). The resolution entitled “Condemning Iranian state-sponsored terrorism and expressing support for the Iranian people’s desire for a democratic, secular, and non-nuclear republic of Iran” also recognizes the people of Iran’s desire to be free from the rule of the mullahs.

Mrs. Maryam Rajavi, President-elect of the National Council of Resistance of Iran (NCRI), has commended the United States for this resolution. She spoke about the events during a virtual conference held by the Organization of the Iranian American Communities (OIAC).

In her address to the participants of the online conference, Mrs. Rajavi thanked them for their continued support in bringing the Iranian regime to justice and their support in moving forward towards freedom, democracy, and human rights in Iran.

She also thanked Congressman Tom McClintock for presenting the resolution to the United States government and Representative Brad Sherman for his pivotal role in the proposal. Mrs. Rajavi emphasized that the resolution has bi-partisan and majority support, showing the people of Iran and the Iranian regime, that the United States stands with the people in their desire to hold the regime accountable.

Mrs. Rajavi emphasized: “Our struggle is not for taking power, but to realize the Iranian people’s desires. The Iranian people have struggled against two dictatorships and for freedom. They overthrew the shah and will continue their struggle to overthrow the mullahs’ regime and achieve freedom.”

The resolution supports a separation of religion and state in Iran – a very important factor that will make Iran a country in which the people are not discriminated against because of their beliefs. For far too many decades, the ruling regime in Iran has carried out all sorts of atrocities in the name of religion. A peaceful religion that the people do not want the regime to continue abusing.

The leader of the Resistance said: “Today, our nation, Iran, is at a critical moment in history. The regime’s regional strategy has hit a dead end. Corruption is widespread. The Iranian people realize that the suffering and poverty they face is because the mullahs have plundered our nation’s wealth. The criminal mullahs have no way out of the crisis of overthrow.”

The people are certainly going to be the force behind regime change. There is no doubt about this. The regime would already have fallen if it were for the will of the people alone, but they have lacked the international support that they so desperately need.

The Resistance has called on freedom-loving people across the world to back the people of Iran and show them that the international community respects their desire for rights that much of the rest of the world take for granted.