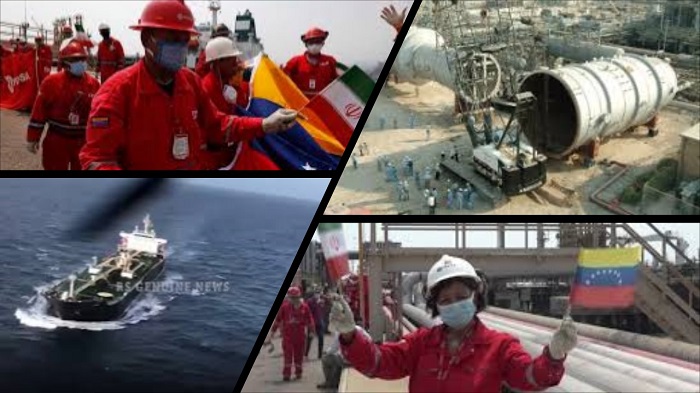 Tankers loaded with 43 million liters of gasoline and refinery equipment were seen departing the port of Bandar Abbas in southern Iran, en-route to Venezuela with an expected arrival time in state-run PDVSA’s ports on May 24th. The total value of these gasoline shipments is $45 million, which has often been exchanged for gold bars.

Because Iran’s Revolutionary Guards (IRGC) are the key shareholder in the Iranian oil industry, most refineries, wells, and wharves in Iran’s provinces, which are awash with oil, have direct links with IRGC’s interests. This doesn’t mean there are eager buyers, as the COVID-19 outbreak, coupled with international sanctions, has contributed to a decrease in requests for gasoline. As a result, renowned figures in the IRGC have been seeking out other potential customers. The first stage of the Setareh Khalij-e Fars refinery with a 360,000-barrel gas condensate capacity was operational on April 30th, 2017. It aimed to reduce the need for Iranians to import these products over the long term.

“Why Iran Is Exporting Gasoline to Venezuela”
By Jubin Katiraie @Iran_Focus

No customers now for Iran’s gasoline

It has now been revealed that despite the large volume of gasoline available there are simply no customers either inside Iran or overseas. This is mainly a result of the spread of COVID-19 which has led to at least a 50% lowering in demand for gasoline which is now barely 50 million liters per day. This has resulted in a surplus remaining. It is because of this situation that negotiations between Iran and Venezuela have taken place over gasoline sales.

It is because of the fall in local demand for gasoline that the government is confronted with a monetary crisis. Due to sanctions imposed on the country Iran is unable to export as much gasoline as it could do in past years. Iranian authorities are facing a downturn in petrol or non-petrol exports while they have debts which are now surpassing billions of dollars. The research center of the Iranian Parliament (Majlis) recently announced that the National Iranian Oil Company (NIOC) owes $34 billion to the country’s banking system including the Central Bank of Iran (CBI).

There has been so much corruption, nepotism, and expensive foreign policies that vast areas of Iran’s economy have been ruined, including the oil industry. The regime has done little about correcting its mistakes.

More than 47,500 people have died of the novel coronavirus in 323 cities checkered across all of Iran’s 31 provinces, according to reports tallied by the Iranian opposition People’s Mojahedin Organization of Iran (PMOI/MEK Iran).

However, the Iranian people have seen through the government’s policies and the effect they have had on impoverishing the people at a time when we all need to consider the COVID-19 crisis.  There is an expectation that time is running out for the regime and in no time at all, there will be a change in government.