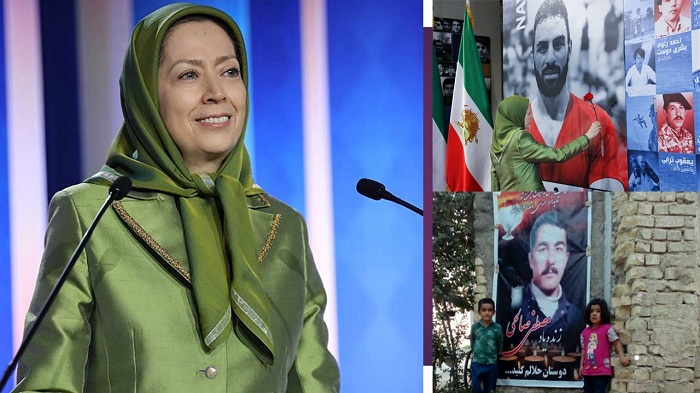 in recent days, sentenced several MEK supporters on the pretext of “waging war against God” in sham trials in Evin Prison thus putting them at risk of execution.

In order to create a climate of terror and to prevent the rise of popular uprisings, and for fear of the reception of the People’s Mojahedin Organization of Iran (PMOI/MEK Iran) by the entire youth, the Iranian regime has launched a wave of executions in Iran.

On September 11, for a third time, Branch 38 of the Mullahs’ Supreme Court upheld the death sentence against seven Sunni political prisoners held in Ward 7 of Gohardasht Prison in Karaj, west of Tehran.

On Thursday, August 6, 2020, Branch 27 of the clerical regime’s Supreme Court upheld the death sentence for political prisoner Haidar Ghorbani from Kamyaran (Kurdistan Province) and referred the case to the Sanandaj prosecution office responsible for carrying out the verdict.

Executions are intended to intimidate people and make them hesitate before standing up against the repressive regime. Particularly considering that the #MEK’s Resistance Units organize so many of the protests in #Iran.#FreeIran2020 #StopExecutionsInIranhttps://t.co/YM0dtQZAmW pic.twitter.com/bkX4viwGmy

At the same time, yesterday, the regime’s Judiciary Chief Ebrahim Raisi reacted to the international condemnation of the criminal execution of Navid Afkari. He said, “Justice-seeking judges who have to answer to God issue verdicts based on law and Sharia. Commotions must not and cannot impact the view of a judge.”

Maryam Rajavi, the President of the National Council of Resistance of Iran (NCRI), called on August 10 for the international community to take immediate action to save the lives of political prisoners and protesters detained in Iran as the ruling regime has begun to issue (and carry out) death sentences in order to suppress uprisings.

The uprisings in November 2019 shook the mullah’s regime to its foundation, and the mullahs’ regime knows that the next uprising could erupt at any time in Iran.

Executions are intended to intimidate Iranian people in particular the youth and make them hesitate before joining the MEK for standing up against the repressive regime. The mullahs regime’s history with the MEK should have taught them the fallacy of that thinking, particularly considering that the MEK’s Resistance Units organize so many of the protests across Iran. however, the oppression of the Iranian opposition, the People’s Mojahedin Organization of Iran (PMOI / MEK Iran) and (NCRI), makes the Iranians people more determined for overthrowing the mullahs’ regime.

“The religious fascism ruling Iran must be strongly condemned and expelled from the international community for its continued use of torture and arbitrary executions, especially of political prisoners, and its brutal and systematic human rights violations.”

United Nations Security Council, Secretary-General, High Commissioner for Human Rights, and Council of Human Rights, as well as other international organizations to take immediate action to overturn the death sentences. She stressed that an international fact-finding delegation must be sent to Iran’s prisons to meet prisoners, especially political prisoners.