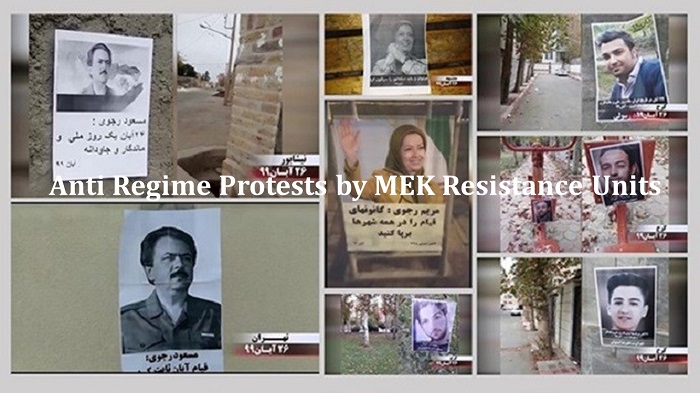 To mark the anniversary of last year’s protests in November, the Iranian resistance Units, aligned to the People’s Mojahedin Organization of Iran (PMOI / MEK Iran) organized a series of activities in several Iranian cities. Banners showing opposition leaders, Maryam Rajavi and Massoud Rajavi, were unfurled and displayed; slogans were sprayed onto walls and buildings where hated representatives of the ruling theocratic regime were attacked.

These activities were to commemorate the November anti-regime protests, the most significant in Iran’s post-Revolution history. Sparked by sudden and very unpopular gasoline price hikes, the protests soon turned against the regime. The protesters were attacked by elements of the state security forces and Basij militia who murdered 1,500 in cold blood and arrested many more. Reuters confirmed in a special report on December 23, 2019, about the deadly crackdown on November nationwide protests in Iran the death toll of 1500 that was announced by the People’s Mojahedin Organization of Iran (PMOI / MEK Iran) on December 15, 2019.

Slogans were sprayed on city walls such as those of Karaj, Khorramabad, Hamedan, Mashhad, Neyshabur, Tehran, Rasht, Sanandaj, Urmia, and Varamin. Some of the slogans used were:

It is a very brave act to take part in any of these activities at this time as the Iranian regime has stepped up its surveillance and repression of any kind of dissent in Iran. Anyone accused of supporting the MEK or opposition in Iran may be arrested, tortured, and executed.

These actions by young activists keep the hopes alive for many Iranians who wish to get rid of the mullahs and their corrupt regime and replace it with a democratic, secular alternative.

However, in the current powder-keg situation of #Iran, the activities of the #MEK Resistance Units play a key role in countering the regime’s suppressive measures and giving hope to millions of oppressed people inside Iran who yearn for freedom. https://t.co/Vev8j4YrP0 pic.twitter.com/MjsaYJAzGL

Some of the buildings that were attacked and in some instances torched included: