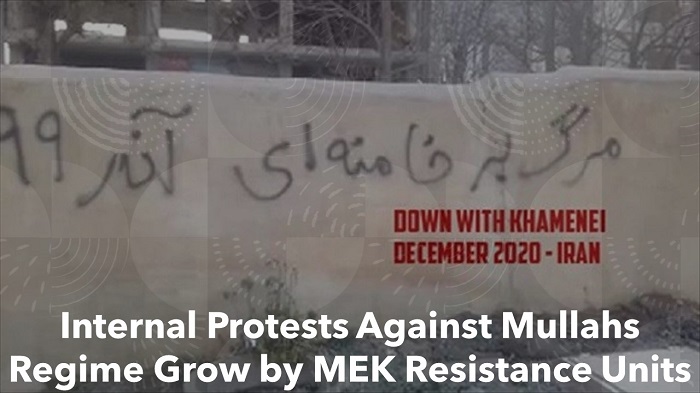 Protests against the corrupt and inept Iranian regime are growing by the  People’s Mojahedin Organization of Iran (PMOI / MEK Iran) internal networks called MEK Resistance Units in Iran. In several cities, like Hamadan, Mashhad, and Tehran, graffiti has been sprayed on the walls of buildings. Slogans include:

The main protesters are the (PMOI / MEK Iran)’s network of MEK Resistance Units.

Each nationwide uprising has revealed the powder keg that exists in Iran. There have been at least five uprisings in recent years in Iran.

The MEK’s Resistance Units risk life and limb as they extend their influence and protest activities across Iran. Despite the repression by security forces in Iran, the (PMOI / MEK Iran) has shown that it is gaining support.

The following is a snapshot of recent protest activities in Iran.

December 17th: Young activists set fire to a Khomeini Foundation building in Lorestan. This foundation is linked to Supreme Leader Ali Khamenei and is known to be involved in corrupt economic practices.

December 17th: Young activists bravely set fire to a Basij base in Shariah. The Basij is a branch of the Revolutionary Guards and probably the most hated element of the Iranian armed forces. It is involved in suppressing internal dissent using maximum force whenever unarmed Iranians are involved in protests. The Basij paramilitary was used against the November 2019 protests, leading to 1,500 deaths and thousands of arrests. Reuters confirmed in a special report on December 23, 2019, about the deadly crackdown on November nationwide protests in Iran the death toll of 1500 that was announced by the People’s Mojahedin Organization of Iran (PMOI / MEK Iran) on December 15, 2019.

December 18th: MEK Resistance Units unfurled banners of Maryam Rajavi and Massoud Rajavi, leaders of the National Council of Resistance of Iran (NCRI), with anti-regime slogans in Fariman and Tehran. In other cities, like Mashhad, slogans were sprayed on city walls like: “Down with Khamenei, hail to freedom.”

The fact that protests are continuing in an atmosphere of fear and repression is an indication that the (PMOI / MEK Iran)’s influence is growing as has been noted by Khamenei in various speeches he has made. Both Khamenei and Hassan Rouhani, the regime’s President, have expressed their concern about the growing threat from the (PMOI / MEK Iran).