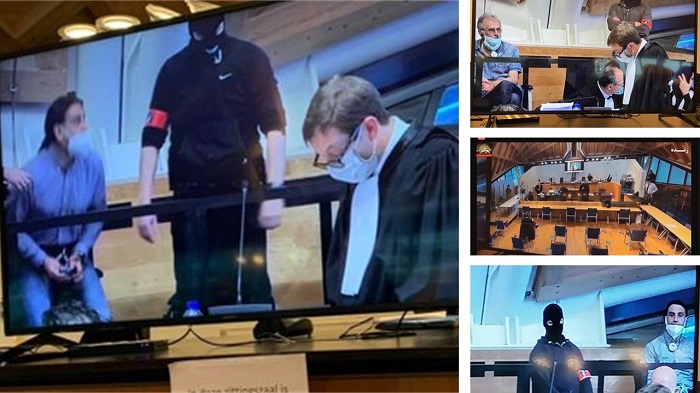 Assodollah Assadi, the Iranian regime diplomat charged with being a terrorist, did not attend the first court session of his trial, held on 27 November in Antwerp, Belgium. The information revealed during the first days of this trial has affirmed that Assadi’s thwarted terrorist plot was an act of state-sponsored terrorism against the People’s Mujahedin of Iran (MEK / PMOI Iran) and, the National Council of Resistance of Iran (NCRI).

Alongside Assadi, three other co-conspirators, Nasimeh Naami, her husband Amir Sadouni, and Mehrdad Arefani, were arrested on charges of attempting to carry out an act of terrorism and for partaking in a terrorist group. The group, led by Assadi, planned to bomb the democratic Iranian resistance rally near Paris on 30 June 2018.

The target of the bomb was the President-elect of the NCRI, Maryam Rajavi. After the first of the Iran uprisings, beginning in 2017 and lasting into 2018, the regime was threatened by the growing following of the NCRI and MEK and wanted to assert their power and attempt to destroy the resistance movement.

As with all major state decisions, Hassan Rouhani, the president of the Iranian regime, and the Supreme Leader Ali Khamenei gave the final approval on the terrorist plot. The Supreme National Security Council of Iran approved the plan to bomb the NCRI’s “Free Iran” gathering. Rouhani presided over the meeting that was held to initiate the plot and this was ultimately ratified by Khamenei.

The decision was further passed through several more layers of state-approval. The regime’s Foreign Minister, Mohammad Javad Zarif, was in charge of facilitating the terrorist plot, and the Ministry of Intelligence and Security was responsible for implementing the plan.

Upon his arrest, Assadi would not cooperate with the Belgian authorities and opted not to participate in the first court session on 27 November. Further to this, Assadi even threatened Belgian authorities that the regime would take revenge if he was to be found guilty and suggested that further terrorist activities would take place.

Sadouni and Naami, two of the co-conspirators in the case, gave an alibi to the Belgian authorities, claiming that they were intimidated into playing their part in the terrorist attack and weren’t aware of the bomb. However, the authorities found around 240,000 euros in the possession of the couple, exposing this alibi as untrue.

Further information revealed in Assadi’s notes, discovered by authorities in his car upon his arrest, also shows that the couple were agents of the Ministry of Intelligence and Security and were fully aware of their role in the terrorist plot. Assadi’s notes also disclosed code names and metaphors used when communicating regarding the bomb plot, including PlayStation 4 to allude to the bomb itself and T.V Charge to describe the bomb battery charger.

Maryam Rajavi, the target of the attack issued this statement: “The Iranian regime’s leaders must be prosecuted and face justice. This is an imperative and deterrent step to counter the godfather of international terrorism in our time. The European Union must designate the entirety of the Ministry of Intelligence and Security (MOIS) and the Islamic Revolutionary Guards Corps (IRGC) as terrorist entities. The Iranian regime’s intelligence agents, and the Quds Force and its mercenaries in European countries must be prosecuted and expelled.”