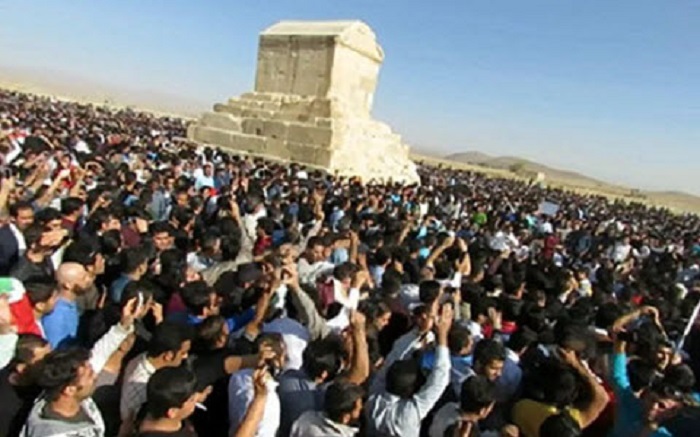 MEK supporters and the Resistance Units commemorated the “Day of Cyrus the Great” across Iran, by placing placards, banners, and writing graffiti.

MEK supporters and the Resistance Units

MEK supporters and the Resistance Units in addition to Tehran, these activities were carried out in other cities across Iran, including Shiraz, Mashhad, Qazvin, Neyshabur, Karaj, Kermanshah, Ardabil, Rasht, Tabriz, Qom, Gorgan, Behbahan, Izeh, Shahriar, and Sarab.

Among the slogans were:

“We will fight, we will die, we will take back Iran,”

“We will fight, we will die, we will take back Iran,” “Neither the crown nor the turban, it’s the end of the mullahs,” “Down with the oppressor, be it the Shah or the leader (Khamenei),” “Iranians are vigilant, they hate both the shah and the mullahs,”

“Down with the dictator, hail to Cyrus the Great,”

“Death to Khamenei, Hail to Rajavi,” “Down with the dictator, hail to Cyrus the Great,” “Cyrus, Mossadegh, your path continues. In the hope of a free Iran, no to the religious dictatorship.”

Known today as the Cyrus Cylinder, this ancient record has now been recognized as the world’s first charter of human rights. It is translated into all six official languages of the United Nations and its provisions parallel the first four Articles of the Universal Declaration of Human Rights.

In 539 B.C., the armies of Cyrus the Great, the first king of ancient Persia, conquered the city of Babylon. But it was his next actions that marked a major advance for Man. He freed the slaves, declared that all people had the right to choose their own religion, and established racial equality. These and other decrees were recorded on a baked-clay cylinder in the Akkadian language with a cuneiform script.