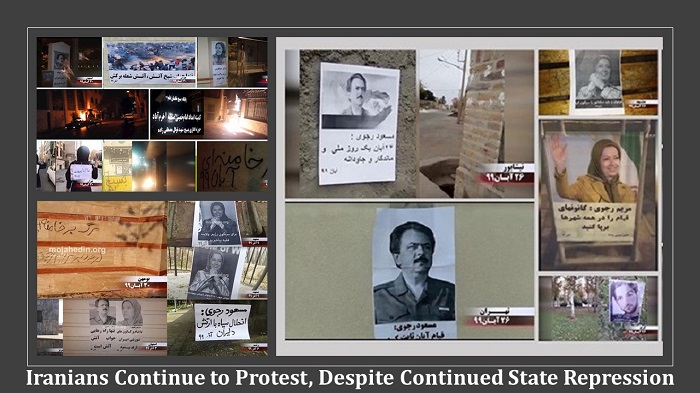 “Down with Khamenei, hail to freedom,” and “Rise up to overthrow the regime of the Supreme Leader” are the slogans that can now be seen spread across Iran.  Those who are responsible for these moves by activists are linked to the Iranian opposition movement the People’s Mojahedin Organization of Iran (PMOI / MEK Iran). These resistance units played a key role in the organizing of nationwide protests in January 2018, November 2019, and January 2020.

This of course has enraged the regime as despite its murderous tactics against the opposition hasn’t succeeded in suppressing the key opposition movement. What is more of a worry to the regime is the role that outspoken youth are playing as they have been consistently been supporting the (PMOI / MEK Iran).

The MEK Resistance has been consistently organizing anti-regime campaigns in cities such as Arak, Hamadan, Jahrom, Bumehen, Dorud, Dezfoul, and Neyshabur. Many of the slogans scribbled  on walls include  “Down with Khamenei, hail to freedom, hail to Rajavi,” and “The supreme leader is the cause of people’s death.” Not long ago if anyone was caught chanting these sorts of slogans it was disallowed and the person could have been sentenced to death.

The MEK Resistance Units have put up posters of Iranian Resistance leader Massoud Rajavi and President-elect of the National Council of Resistance of Iran (NCRI) Maryam Rajavi in various cities telling people that there is an alternative to the present regime.

In Bumehen, a county in Tehran province, Resistance Unit members have displayed slogans such as “No to the crown and no to the turban, the mullahs’ end is near.” This indicates the Iranian people’s despair with the current regime.

Another important slogan repeated constantly by the resistance movement has been ‘’The blood of 1500 martyrs of freedom made protesters more determined. ” Pictures of martyrs have been spread about the cities of Iran. A pledge has also been promoted and that is continuing the struggle for freedom.

The MEK Resistance Units have continually held the Revolutionary Guard (IRGC) responsible for the repression, persecution of protesters as well as stealing of the wealth of the country created by ordinary people.

12 IRGC bases have been targeted recently by Iranian youth. This includes the Basij paramilitary bases in Shahriar, Baharestan, and Nassim Shahr, a  district of Tehran, and in Mobarakeh and central districts of Isfahan, Khorramabad, Ahvaz, and Tonekabon.

The Basij has used terrorist tactics against the Iranian people to ensure the mullahs keep their role of running the country. The Basij is known for the tactics it used to quell the November 2019 protests.

The youth of the (PMOI / MEK Iran) resistance unit was responsible for burning completely various posters of regime leaders.

Rebellious youths also destroyed three centers for the ongoing role they have played in spreading fundamentalism and Sharia Law in Tehran and Ahvaz. It is the fundamentalist centers that are hated the most by the youth in Iran and are established to control the youths and in particular young women who try to inflict the most medieval rules. For example, there is a branch of the police called the morality police who constantly control Iranian women and make them wear the hijab.