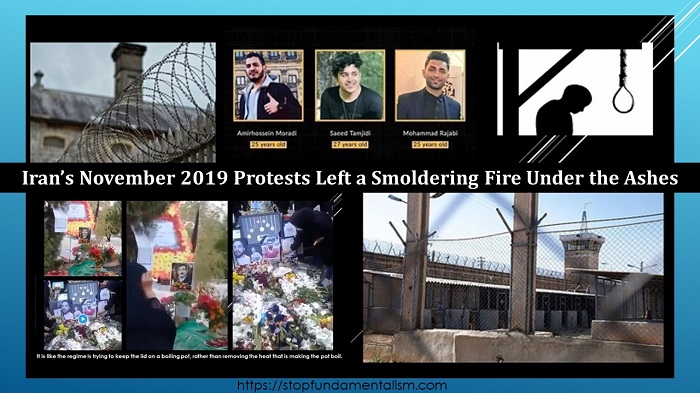 The Iranian regime is on the defensive, as one of its state-run media outlets issues warnings that Iran is about to explode into more uprisings similar to the November 2019 protests.

There was little doubt that the November 2019 uprising led to an unprecedented crackdown and authoritarian use of power to suppress the peaceful protests. It all started from a hike in petrol prices but led to anger about the regime’s corruption and looting. Those taking part were suffering from poverty.

However, this was of no concern to the regime and they did what few countries would never dare to do and that was to open fire with live bullets onto unarmed protesters leaving 1,500 dead, according to (PMOI / MEK Iran). That wasn’t enough for the regime as it arrested 12,000 more and subjected them to torture and imprisonment, 7,000 of them still remain incarcerated.

Reuters confirmed in a special report on December 23, 2019, about the deadly crackdown on November nationwide protests in Iran the death toll of 1500 that was announced by the People’s Mojahedin Organization of Iran (PMOI / MEK Iran), on December 15, 2019.

The above figures were obtained and leaked by the Iranian opposition to the People’s Mojahedin Organization of Iran (PMOI / MEK Iran), and Reuters also confirmed this reality. However, a list of names has never been released by the regime but the MEK has been able to publish 811 names and images of protesters killed on that date in November many of them were young.

One of the regime’s biggest fears is being overthrown, so it has executed some of the protesters to frighten people into submission.

There has been a massive Twitter campaign demanding the release of detainees who have been convicted and sentenced to death by execution. In that campaign, users tweeted 12 million times the Persian hashtag #donotexecute and demanded that the death penalties be revoked for Amir Hossein Moradi, Saied Tamjidi, and Mohammad Rajabi. So far the regime has put them on hold.

Mohammad Bara’e, visited the Greater Tehran spoke to several prisoners and he told three political prisoners to keep quiet about their situation. These three prisoners have been identified as Amir Hossein Moradi, Mohammad Rajabi, and Saied Tamjidi.#MEK #Iran #FreeIran2020 pic.twitter.com/y6fFA8V5xo

Some other convicted protesters did not escape execution and they were Mostafa Salehi, and Navid Afkari, a 27-year old wrestling champion. This act has outraged both the domestic and international communities. It is likely that it has changed the international community’s view of Iran forever. Any suppressive tactics against the protesters have just angered the people to the point that the protests are not over, nor suppressed, and represent a smoldering “fire under the ashes.”

The above sentiment is backed up by state media such as the IGRC affiliated Javan daily which has spread a warning about the “explosive state of Iran’s society.”

Iranians are resisting the #Iranian regime’s attempt to repress them after the emotional executions of two political prisoners, Navid Afkari and Mostafa Salehi. Family members, friends, and others who knew them have gathered at Navid Afkari’s graveside in his memory. #MEK #Iran pic.twitter.com/WvqwUcUHMk

Over 116,500 people have died of the novel #coronavirus in Iran, according to reports by the #MEK #Iran as of Monday afternoon local time, October 5. The official death count declared by the regime stands at 27,192, around a fifth of the actual figure.https://t.co/R9JP57GJQK

Mrs. Maryam Rajavi the President-elect of the National Council of Resistance of Iran’s (NCRI): The Iran uprising cannot be extinguished. The battle of Iranian people, MEK resistance units, and the great Liberation Army will march forward and end the ruling religious tyranny in Iran.

Five nationwide protest rallies since 2018 show explicitly that the Iranian people no longer want to be dominated by the current regime.