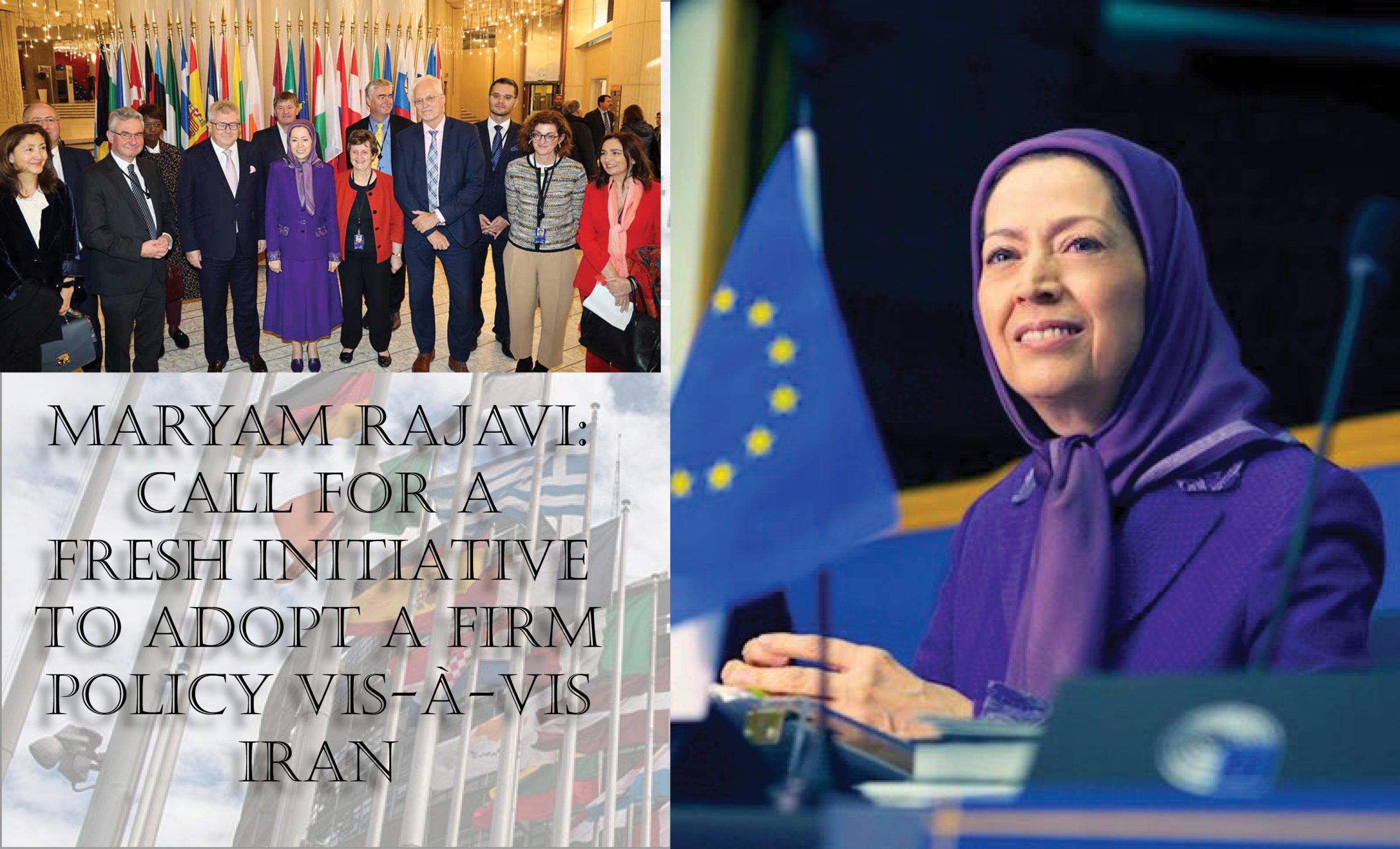 Strasbourg, October 23, 2019— Iranian opposition leader Maryam Rajavi attended a conference at the headquarters of the European Parliament in Strasbourg, which called for a strong European approach vis- à -vis the Iranian regime’s human rights violations and warmongering. In this conference, Mrs. Rajavi presented a new book that contains the names and particulars of 5,000 MEK martyrs executed by the Iranian regime.

Mrs. Rajavi also delivered a keynote speech, in which she drew attention to the 1988 massacre of 30,000 Iranian political prisoners and the ongoing crimes of the mullahs ruling Iran. Mrs. Rajavi called for a firm policy toward the Iranian regime which takes into account its egregious human rights violations and supports the Iranian people’s aspirations for freedom and democracy. 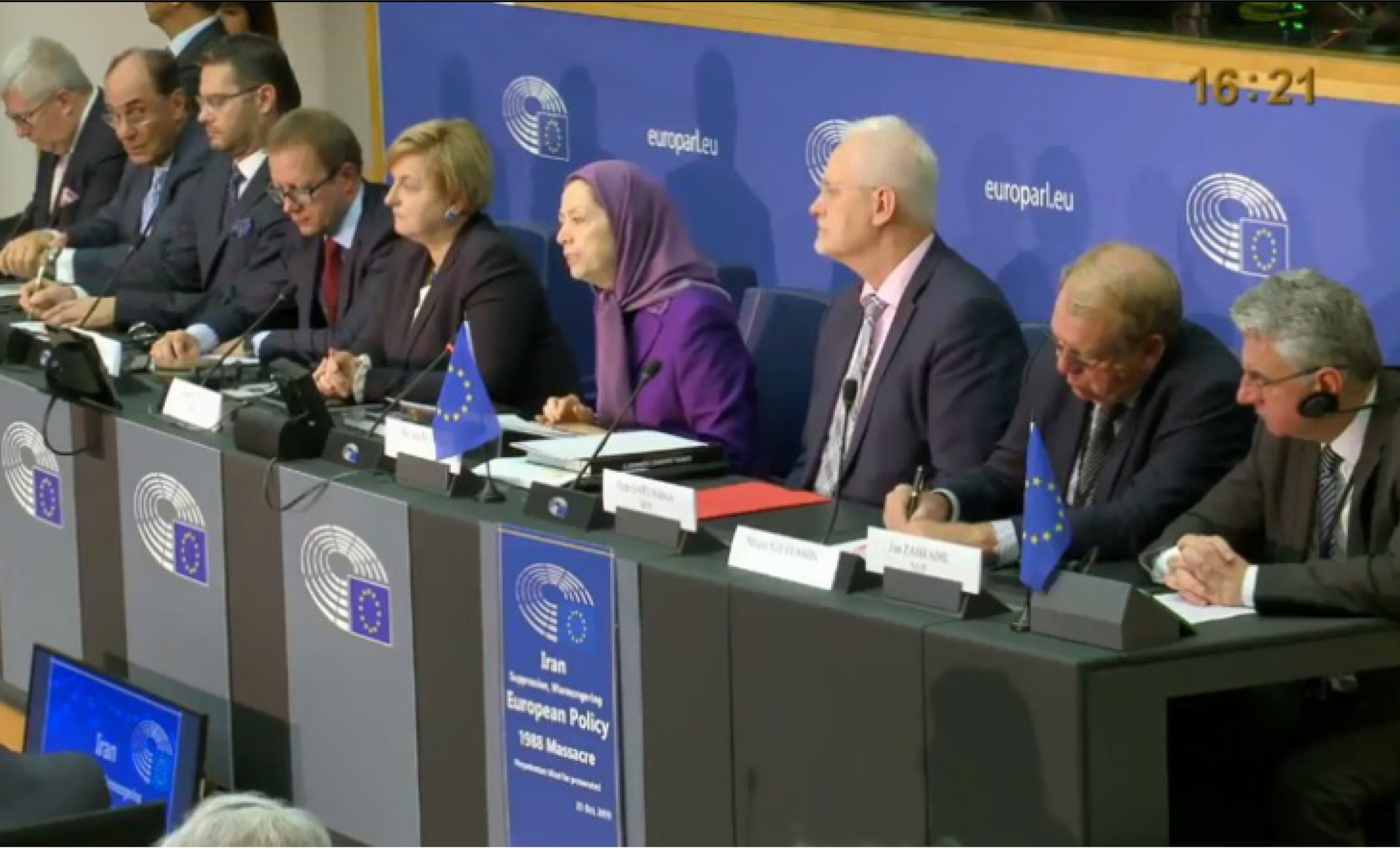 It is a pleasure to be in Europe’s house of democracy.

At the outset, I would like to introduce an extraordinary document to the representatives of the people of Europe.

This book contains the names of more than 5,000 political prisoners massacred by the mullahs in Iran. If I were to summarize the situation in Iran after 40 years of the rule of religious fascism, I would say: Iran is a massacred country where, in addition to political prisoners, its natural resources, culture, and environment have all been massacred.

This is not just a book containing the names of victims, but a historic testimony on how Iran has been taken hostage by the fascist medieval theocracy.

It is the story of a nation suppressed by anti-human mullahs at home. Unfortunately, the outside world has ignored not only the violation of human rights and the suppression of freedoms but also an organized resistance to this regime.

In 1988, based on a fatwa by Khomeini, 30,000 political prisoners were massacred, a majority of the members and supporters of the People’s Mojahedin of Iran (PMOI/MEK).

This crime against humanity was carried out in absolute secret.

The ruling criminals neither published the names nor provided information on where the victims had been buried.

In the past three years, the PMOI pursued and expanded a movement, calling for justice for the victims. The publication of this book is the outcome of that initiative.

The mullahs’ supreme leader, Ali Khamenei, was the president at the time. Hassan Rouhani was the acting deputy commander of the armed forces at the time.

The book also reflects a tragic by-product of the policy of appeasement, which ignored the worst massacre of political prisoners after the Second World War as Western governments and the United Nations turned a blind eye on this crime.

Not held to account for such a horrible crime, the regime spread its war to the Middle East which is still continuing.

Over the past six months, despite maximum leniency on the part of Europe, the clerical regime has continued to breach more and more of its commitments to the nuclear deal. And today, we are about to witness the fourth stage of this breach.

Under such circumstances, I have come to propose to the European Union to adopt a realistic and necessary policy on Iran and the Middle East.

The question is, what must be done against a regime that has deliberately undermined European efforts and initiatives, particularly those by France?

The answer is the adoption of a firm European policy which necessarily requires lending support to the Iranian people’s resistance to establish democracy and popular sovereignty.

At the time of the nuclear deal in July 2015, I emphasized, on behalf of the Iranian Resistance, that to prevent war in the region, the P5+1 countries must firmly insist on preventing the regime’s interferences in other countries and evict the regime’s forces from the Middle East.

Also in January 2017, at the European Parliament, I warned, “If the ruling religious fascism in Iran is not dealt with, decisively, they will impose a deadly war on the region and the world.”

The mullahs took advantage of the nuclear deal and the concessions which came with it to accelerate their ballistic missile program. They turned Syria into a blood bath and fueled the war in Yemen.

Now, let’s take a look at the developments of recent months:

The mullahs and their Revolutionary Guards attacked vessels in international waters and oil installations and airports in the neighboring countries.

The question is why did they launch these assaults? Aren’t they worried about the consequences?

No, because of a lack of a firm policy.

They launch attacks not because they feel powerful, but because the international community’s inaction has emboldened them.

As Massoud Rajavi, the leader of the Iranian Resistance has pointed out, “Four decades of experience have proven that the worst mistake is giving up and failing to behead the serpent. Without this, Iran could not be freed.”

But why do the mullahs need to resort to such insanity? Because inside Iran, the nationwide protest movement has threatened their rule.

Earlier this month, thousands of the people of Lordegan took to the streets in southwestern
Iran to protest against the mullahs.

In recent days and weeks, the city of Arak, 300kms south of Tehran, has been the scene of extensive workers’ protests.

Angry and rebellious youths all across Iran torch the portraits of the regime’s leaders.

The ruling mullahs have reacted by more arrests and executions.

Since 2013, when Rouhani became the regime’s president, some 4,000 persons have been executed. Torture and persecution of political prisoners have continued to this day.

Now, why don’t the governments who seem to be only concerned with doing business not sent, even once, a delegation to visit Iranian prisons and investigate the conditions of political prisoners? Why don’t they react to the suppression of women in Iran who are deprived of their rights and freedoms?

Fortunately, the Europe Parliament has not remained silent vis-à-vis the violations of the human rights of the people of Iran. The EP resolution on September 19, strongly condemned the violations of women’s rights by the mullahs’ regime.

1. The European Union must predicate trade and tie with the Iranian regime on the end to executions and torture in Iran.

2. The dossier on the massacre of political prisoners must be referred to the UN Security Council and international courts so that those responsible for crimes against humanity, particularly the 1988 massacre, face justice.

A proper investigation of the #1988Massacre will undoubtedly lead to a conviction in the International Criminal Court for a number of high-ranking #Iranian officials, including the current Justice Minister and the current judiciary chief, Amb @kenblackwell wrote.#FreeIran #Iran pic.twitter.com/7K6cqi8MxM

3. An international fact-finding delegation must be launched to visit Iranian prisons and political prisoners, and the UN must compel the mullahs’ regime to accept this delegation.

4. And the world community, especially the European Union, must recognize the Iranian people’s right to resist and change the clerical regime, and to establish democracy and human rights in Iran.

One of the names listed in this book is that of Zahra Bijanyar. She was 28 years old and spent long years in prison before being executed. In one of her letters from prison, she wrote:

“I have learned that oppressors cannot take our lives, even if they cut our bodies into pieces. We live on as long as we are firm in our faith. Our lives can be taken away only when we sell out our faith and hearts. And this is the secret to the resistance of our human world.”

This is the message of Zahra and all victims of the 1988 massacre who urge our world to resist tyranny and oppression and fight for freedom.