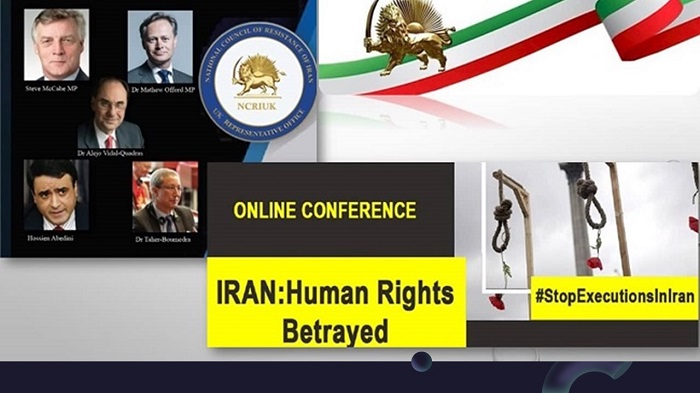 The National Council of Resistance of Iran (NCRI) held an online conference on 16 September 2020 asking for the international community to take action and save the lives of political prisoners in Iran. This is particularly important now after the brutal execution of Navid Afkari on 12 September 2020, who was a 27-year-old Iranian wrestling champion, sentenced for taking part in the 2018 protests. There are currently dozens of political prisoners on death role who are due to face the same fate.

The global community must unite in action to hold the officials of the Iranian regime accountable and prevent further crimes against humanity. The NCRI is calling for an international fact-finding mission, including visits to Iran’s prisons and with inmates, particularly political prisoners. The United Nations Security Council should take decisive action against the mullahs’ deadly regime.

.@HoAbedini There is another wave of secret executions inside Iran’s prisons. The international community must stand with the people of #Iran to secure their fundamental and inalienable rights and freedom. #StopExecutionsInIran #MEK #FreeIran2020 pic.twitter.com/pWK4SX5Wf3

“The regime is in violation of international human rights laws. Yet the international community has failed the people of Iran and allowed the regime to enjoy impunity by refraining from holding regime officials to account.

There is another wave of secret executions inside Iran’s prisons. The international community must stand with the people of Iran to secure their fundamental and inalienable rights and freedom. “

The People’s Mojahedin Organization of Iran (PMOI / MEK Iran)’s new revelation once again shows the large scale of these protests and the regime’s brutality.

The People’s Mojahedin Organization of #Iran (PMOI/#MEK) released the names of 56 more martyrs of the nationwide Iran protests of November 2019, bringing the number of identified martyrs to 811 out of over 1500 who lost their lives. #NoImpunity4Mullahs
https://t.co/uBuzgdscm1

British MP Dr. Matthew Offord described the need for governments to unite and impose sanctions on the Iranian regime for their crimes against humanity:

“The UN has done next to nothing about the regime of Iran. We should not allow the people of Iran to be abused by the regime and ignored by the international community. The regime’s resorting to torture and execution is a clear sign of its desperation. The execution of Navid Afkari was a blow to the country. It is a great regret that he has been executed.

I would like to see the UK government and other governments reimpose sanctions on Iran. It’s a disgrace to allow the regime to purchase weapons and give weapons to its proxies. If Iran wants to have any kind of engagement with the West or other countries in the Middle East, it must stop executions and crackdown on its people, and stop its terrorist activities.”

.@Offord4Hendon I would like to see the UK government and other governments reimpose sanctions on #Iran. It's a disgrace to allow the regime to purchase weapons and give weapons to its proxies. #StopExecutionsInIran #MEK pic.twitter.com/Qz5fnJmVXg

British MP Steve McCabe stated the necessity of a formal investigation to be carried out over the 1988 massacre in Iran, during which over 30,000 political prisoners were murdered by the regime, most of which were members of or affiliated with the MEK:

“The brutal and secret execution of Navid Afkari gives us a sense of what is happening in Iran. There must be worries for dozens of political prisoners who might be wondering if a similar fate is awaiting them. But prisoners in different prisons of Iran are writing letters and protesting the execution of Navid.

I have always been in favor of having dialog to improve a situation. But I’ve long come to the conclusion that we can’t sustain the pretense of having diplomatic relations with the regime. They have no respect for the rule of law and the norms of diplomacy.

It is time for the UN to demand there be an investigation of what happened in the 1988 massacre. You can’t let them get away with impunity. We need to address this responsibly. A UN team must be able to visit the prisons in Iran and examine the conditions of prisoners. It’s time to consider more serious consequences. This includes expelling Iranian diplomats, even the ambassadors, and closing embassies and ending diplomatic relations.”

.@steve_mccabe Navid was forced to confess in the most brutal fashion. It is obvious that the regime has decided to defy the international community and is deaf to what the world is saying. #Iran #MEK #StopExecutionsInIran pic.twitter.com/tGIRx6WXOP

Former European Parliament Vice President, Alejo Vidal, highlighted the terror tactics that are used by the Iranian regime against the people of Iran:

The execution of Navid Afkari was not condemned by the European Union as a deliberate political execution. It was condemned as a death penalty in general. This is weak and allows the regime to continue such executions. European leaders must understand that silence and inaction is—and this is hard to say—complicity with these executions. The regime does not respond to weak condemnations.

Regarding the massacre of political prisoners in 1988, this shows the consequences of silence against crimes against humanity. Many of the perpetrators of that crime are alive and in top positions in power, including the chief of the judiciary. They are living in absolute impunity. They have not been held accountable for these crimes.

It’s time to call for an international investigation into this crime. This issue must be referred to the UN General Assembly and an independent investigation must be launched.

It is time for strong, tangible, and effective action. It’s time for the European governments to shut down Iranian embassies in their 27 capitals. These are not diplomatic offices. They’re centers of espionage. It’s time to send a strong signal to the regime to stop doing these things.”

.@VidalQuadras The execution of #NavidAfkari was not condemned by the EU as a deliberate political execution. It was condemned as a death penalty in general. This is weak & allows the regime to continue such executions. #Iran #MEK #StopExecutionsInIran #FreeIran2020 pic.twitter.com/sj4GIco7tU

Former Chief of the Human Rights Office of the UN Assistance Mission for Iraq (UNAMI) and legal expert, Tahar Boumedra, stressed the need for immediate action against the Iranian regime:

We have a track record of the behavior of the judicial officials in Iran where through kangaroo trials they executed political prisoners in 1988. Men, women, and even children were subjected to this torture. It is time for change to come to Iran. The current legal and judicial system in Iran must be abandoned if the Iranian regime wants to join the UN.

We know with documents that a number of political prisoners are currently on death row and in danger of being executed. If no serious measure is taken, there will be a massive loss of life. It is the responsibility of the international community to say no, it must stop. It is time for the UN to take action.

Action must be taken immediately to save lives. The UN must not be expected to take action. It’s up to the governments, especially the EU and UK, to take action, to stop closing their rights on human rights for commercial gain. The UN must stop recommending action. The matter has to be referred to the UN Security Council to take firm action.”

.@BoumedraTahar We have a track record of the behavior of the judicial officials in #Iran where through kangaroo trials they executed political prisoners in 1988. Men, women, and even children were subjected to this torture.#Iran #MEK#StopExecutionsInIran #FreeIran2020 pic.twitter.com/ddBKlsnWnc

The 16 September 2020 NCRI conference on human rights violations in Iran drew attention to the terrorist tactics and crimes against humanity committed by the Iranian regime. It further highlighted the need for the international community and the United Nations to take a firm position against the regime and ensure effective action is taken so that the regime can no longer able to act with impunity.