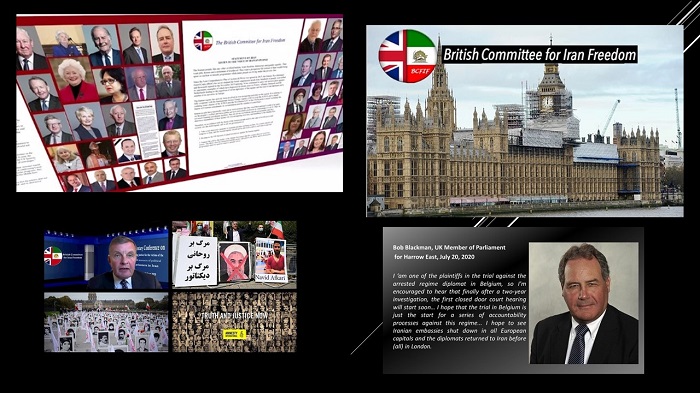 On the 22 September 2020, the British Committee for Iran Freedom (BCFIF) issued a press release announcing the support of over 250 lawmakers from European and Arab countries calling for each of their governments to implement all UN Sanctions on Iran in response to its criminal activities and attempts to obtain nuclear weapons.

The cross-party signatories came from 23 countries, including the United Kingdom, France, Ireland, Portugal, Italy, Belgium, Lithuania, Romania, Switzerland, Jordan, and Egypt, as well as from the European Parliament.

The Rt. Hon David Jones MP said #UK #France #Germany is mistaken in their adherence to the flawed nuclear deal that does not hold the regime to account. The regime to continue its domestic crackdown and export terrorism https://t.co/Uy5scy41aH #MEK #Iran pic.twitter.com/qFRarjVSfF

The statement argued that the snapback of all UN sanctions, under UN Security Council resolution 2231, against Iran is a necessary move in order to enforce an arms embargo and safeguard the world from the destructive forces of the Iranian regime. The group further called for the Islamic Revolutionary Guard Corps (IRGC) to be officially internationally designated as a terrorist organization, due to its violent part to play in the crackdown on protests and resistance movements, such as the pro-democracy opposition, the National Council of Resistance of Iran (NCRI) and the People’s Mujahedin of Iran (PMOI / MEK Iran). To ensure there are no further terrorist plots from the IRGC it is imperative that the terrorist organization is disbanded.

The lawmakers also emphasized the importance of listening to the voices of the Iranian people and supporting them in their fight for freedom, democracy, and human rights as protests are expected to continue across Iran.

#NavidAfkari’s execution, touched world news and now David Jones is asking for the UK government to be more forceful in condemning its approach to the repressive tactics used currently by the #Iranian regime to control its citizens.https://t.co/sPQMnp4ciL

The Rt. Hon David Jones MP also highlighted the need for an official investigation into the 1988 massacre in Iran of 30,000 political prisoners, predominantly of members of the MEK: “The UK, France, and Germany are mistaken in their adherence to the flawed nuclear deal that does not hold the regime to account. It emboldens the regime to continue its domestic crackdown and export terrorism across the region. I stress that the UK should support the re-imposition of sanctions on the regime and an international inquiry into the 1988 massacre of 30,000 political prisoners, primarily activists of the People’s Mojahedin Organisation of Iran (PMOI / MEK Iran) in Iran.”

Bob Blackman MP drew attention to the issue of expelling Iranian diplomats operating in embassies across Europe: “An Iranian diplomat awaits prosecution in Belgium for his alleged role in a bomb plot against the gathering of the Iranian opposition NCRI in Paris in 2018” he added, “the UK and other European governments should scrutinize the Iranian diplomats working in their countries and consider expelling them and if necessary close down those embassies given that the regime’s use of diplomatic cover for its terrorist activities is both known and well-document.”

.@iran_policy Washington, DC | Summit to Support a #FreeIran2020
Bob Blackman, MP, the UK Member of House of Commons says more than 2000 MPs have supported the resolution against the mullahs' regime of #Iran & now time to hold the regime accountablehttps://t.co/Tv1GjT8Wxm

Steve McCabe MP stressed the importance of immediate action in order to prevent further human rights violations by the regime: “with the recent brutal crackdown on protesters and execution of the Iranian wrestler champion Navid Afkari, the regime in Iran reaffirms its pariah status and disregard for international human rights law and the fundamental rights of the Iranian people. Dialogue with the regime at this moment is fruitless. The international community must move to fully implement the UN sanctions against the regime in Iran and secure a UN inquiry into its current and past human rights violations.”

Sir David Amess MP, the co-chairman of the British Committee for Iran Freedom (BCFIF) expressed the necessity of supporting the Iranian people, the NCRI, and MEK: “The UN sanctions and Security Council resolution against Iran must be implemented immediately in order to counter regime’s terrorism and destabilizing activities in the region and the world. But, the ultimate solution to these threats from Tehran lies in the hands of the Iranian people and their pro-democracy Resistance movement led by Mrs. Maryam Rajavi, who struggle for a free and democratic Iran. I urge the international community, including the UK Government, to recognize and support this viable Iranian democratic alternative.”

Governments across the world must unite in their ability to implement all UN sanctions on Iran and hold the regime accountable in order to protect the people of Iran, as well as the international community.