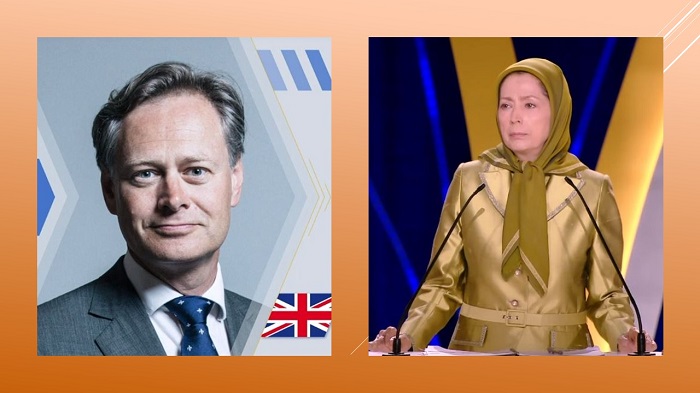 Transcript of remarks by Dr. Matthew Offord, Member of the British House of Commons a long-time supporter of the Iranian Resistance on July 17, 2020, addressing the Free Iran Rally 2020.

A great pleasure to be able to speak with you today. But allow me to begin by sending my regards to the people of Iran who are currently suffering under their regime. And I can also express my solidarity with them as they are faced with a vicious crackdown, persecution, as they simply demand change in their country.

Excerpts from the great speech by Dr Matthew Offord MP at the #FreeIran2020 global summit calling on the UK Gov't & the international community to adopt a firm policy on Iran pic.twitter.com/ASCJ9aoj09

In a recent statement on Iran, 120 members of the House of Commons and the House of Parliament declared their support for the popular protest in Iran against corruption and suppression and supported a 10-point plan for a future free Iran presented by Mrs. Maryam Rajavi is the President-elect of the National Council of Resistance of Iran’s (NCRI).

Tehran’s destabilizing activities from Syria to Iran, Lebanon, and Yemen, its support for terrorism, and last but not least at all, the actions against Iranian dissidents (PMOI / MEK Iran), in Europe and the pursuit of a nuclear and ballistic missile program, all which violates the UN Security Council Resolution 2231, the UN armed embargo against Iran, the nuclear deal, and counterterrorism laws in the United Kingdom, they are all well-documented in recent statements by the UN Secretary-General, the IAEA, and many Western governments. That is why I call on the UK government to join the maximum pressure of this campaign on the regime.

British MP Matthew Offord
"You are the proof of a proud, brave nation that will never succumb to the atrocities of Iran’s regime."#FreeIran#IStandWithMaryamRajavi pic.twitter.com/B7lK5Pmna5

This campaign has already denied Tehran billions of dollars they could have used otherwise to destabilize parts of the Middle East and further afield. But thanks to this pressure, Tehran is losing ground in places like Iraq, Syria, and Lebanon.

But the UK government should also work with allies in the EU and the UN in order that we support an immediate extension to the UN arms embargo against Iran, as well as the reimposition of international and UN sanctions against Tehran that were lifted as part of the nuclear deal. Furthermore, the UK should proscribe the entirety of the IRGC as a foreign terrorist organization to deny it the funds it needs to suppress the people of Iran and to export terrorism abroad.

3/3 Dr Matthew Offord MP at the #FreeIran2020 global summit: "To muster the political courage to do that the international community should look to the Iranian people and their Resistance movement led by Mrs Maryam Rjavi who are showing the way." pic.twitter.com/nYxCMKY0pB