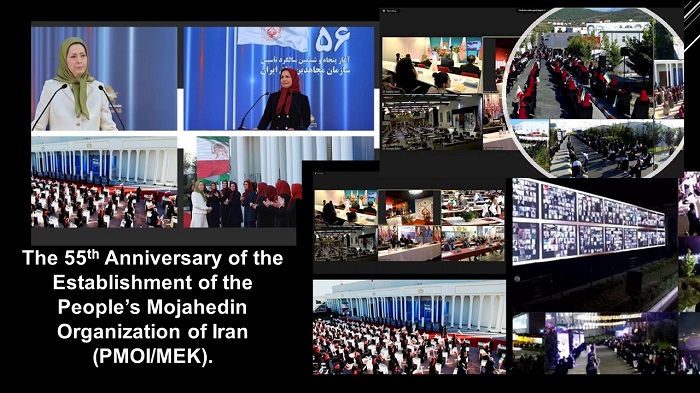 The 5 September 2020 marks the 55th anniversary of the establishment of the People’s Mojahedin Organization of Iran (PMOI / MEK Iran). The MEK was formed by three young Iranian intellectuals, Mohammad Hanif Nejad, an agricultural engineer from Tabriz, Saeid Mohsen, a mechanical engineer from Zanjan, and Ali Ashghar Badizadegan, a chemical engineer from Karaj. Together they gathered in a small apartment to begin their fight for democratic freedom in Iran. The MEK is now the primary opposition movement to the regime in Iran.

In their youth, the three men had been advocates of Iran’s well-liked prime minister, Dr. Mohammad Mossadegh. They had seen how the Shah’s regime had actively repressed efforts to form a free and democratic government. The founders of the MEK did not become discouraged and instead banded together to firmly establish a new freedom movement in Iran.

Members and supporters across the globe joined a massive online event on Saturday, September 5, to celebrate the 55th founding anniversary of the Iranian opposition People’s Mojahedin Organization of Iran (PMOI/MEK).#Iran#MEKhttps://t.co/PNZycdB04B

Badizadegan, Mohsen, and Hanifnejad considered the previous resistance movements in Iran, as well as other countries, and observed the best way to lead the organization for the people of Iran. From the history of resistance movements, it was evident that in order to achieve freedom in Iran it would be necessary to overthrow the Shah regime. The founders knew that a dangerous yet worthwhile future was ahead of them. Members among Iran’s brave and elite students were recruited and very quickly the MEK had hundreds of members in its organization.

The Shah regime did what they could in an attempt to stop the flourishing MEK from gaining too much power. In 1970 the majority of the MEK’s members were arrested, including the three founders and most senior members. Badizadega, Mohsen, and Hanifnejad were issued death sentences for establishing the resistance to the regime. They were offered a pardon in exchange for turning their backs on the opposition movement and publicly supporting the Iranian regime. The three men would not sacrifice their ideals and instead, in an inspiring symbol of resistance, gave their lives for the opposition movement. They bravely faced the firing squad and were executed in 1971.

The Shah regime believed the execution to be a victory over the MEK and Iranian resistance movement. However, the defiant example set by Badizadega, Mohsen, and Hanifnejad would continue to empower the Iranian people well beyond the reign of the Shah regime. Following the deaths of the founders of the MEK, Massoud Rajavi, the only surviving senior member of the organization became the new leader of the movement and pushed the MEK forward in their fight for a democratic and free Iran.

The MEK garnered an even greater following after the 1979 revolution that overthrew the Shah regime. Ruhollah Khomeini became the new regime’s leader and quickly implemented its rule of terror and fundamentalism throughout the nation. As the most established presence standing for freedom and democracy, the Iranian people turned to the MEK to represent their opposition to Khomeini’s regime.

The traditions of the PMOI/MEK, particularly making sacrifice to realize the regime’s overthrow, are guiding the younger generation on the streets. #Iranhttps://t.co/vIAXcF9Qc7 pic.twitter.com/VidloVbAAa

Khomeini also attempted to destroy the MEK through a regime of violence and intimidation. In 1981, he banned the existence of opposition movements and during a peaceful and unarmed protest rally, organized by the MEK, ordered his Revolutionary Guards to open fire on the protestors. Following this, the regime murdered thousands of MEK supporters in the streets, subjected others to brutal torture in prison, and executed thousands more. At its most severe point, Khomeini issued a fatwa in 1988 to execute all of Iran’s political prisoners who were affiliated with the MEK. “Death Commissions” were formed and subsequently over 30,000 political prisoners were massacred in the space of months.

Through this, all the proud members of the MEK have never given up and continue to oppose the oppressive Iranian regime. The regime has tried many methods over the years, including spreading negative propaganda and hate campaigns inside Iran and on an international level. When these tactics have not been successful it has turned to use terrorism and assassination against members and of the MEK across the globe. Yet nothing has ever been enough to deter the MEK from growing into the largest and most organized opposition movement to the Iranian regime and a legitimate alternative to the theocratic rule of the mullahs.

In 2020 the goals and ideals laid down by the founders of the MEK are even more present than ever in the hearts of the Iranian people and even further across the world. This is demonstrated by the ongoing efforts of the Resistance Units in Iran and the acts of thousands of Iranians who participate in rallies and events organized by the MEK internationally. Across the globe, politicians, legislators, human rights defenders, and religious leaders recognize the danger of the Iranian regime to not only Iran but the whole world. The MEK has also gained international support from these figures, who acknowledge the organization as the key to establishing a free and democratic Iran and further support peace throughout the Middle East.

The ambitions of Hanifnejad, Mohsen, and Badizadegan live on 55 years after founding the MEK. The hundreds of thousands of martyrs of the resistance movement gave their lives so that the opposition could continue to grow and have inspired new generations of Iranian’s, at home and internationally, to bravely go forward in their fight for freedom and democracy in Iran.