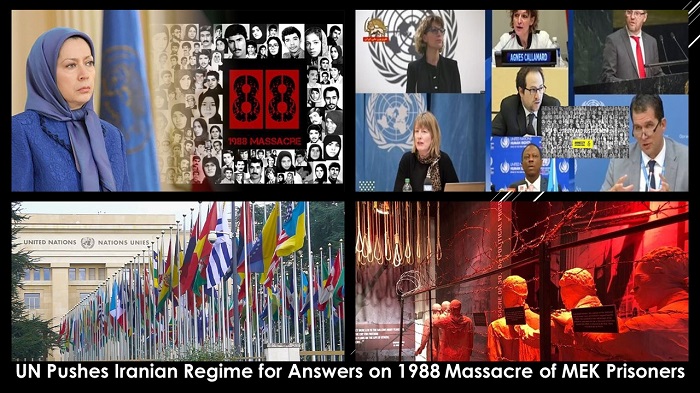 The People’s Mujahedin of Iran (PMOI / MEK Iran) and the National Council of Resistance of Iran’s (NCRI), have been campaigning for years for the international community to hold the Iranian regime to account for its crimes against humanity, in the 1988 massacring of political dissidents and prisoners, many of whom were members of the MEK. Finally, with the support of other human rights groups, such as Amnesty International, the MEK’s struggle has had a breakthrough, as UN experts have sent a letter to the Iranian government in pursuit of accountability.

Statement of Support for @amnesty by Former Political Prisoners Who Witnessed the #1988massacre in #Iran
An attack on Amnesty International is an assault on the Justice Movement and can only serve the interests of those who ordered the massacrehttps://t.co/pO0eBf48Qq

The massacre took place just as the Iran Iraq war was ending, during which the MEK, the democratic resistance movement, opposed the regime’s illegitimate war. The war caused at least 500,000 deaths and many of the victims were youths and children. The regime was threatened by the support that the (PMOI / MEK Iran) had gained for their position against the war and in their struggle to end the economic and social misery in Iran. In an attempt to destroy the resistance movement, the regime carried out the massacre of the (PMOI / MEK Iran) political prisoners.

“Death Commissions” were set up in order to carry out mass executions, under the personal order of then-Supreme Leader, Ruhollah Khomeini. The death penalty was given after an illegitimate trial, which only lasted minutes, and any person found to be a member of or affiliated with the (PMOI / MEK Iran) was sentenced to death.

Around 30,000 political prisoners and dissidents were killed during the 1988 massacre, a crime for which nobody has been held accountable. Many top Iranian officials, such as Ebrahim Raisi, the regime’s current Judiciary Chief who was Tehran’s Deputy Prosecutor, and Justice Minister Mostafa Pour Mohammadi, were members of the death commission and have been rewarded for their role in the massacre.

Since 1988 the regime has continuously endeavored to conceal the circumstances around the massacre, including the location of the mass graves where the victims were carelessly buried.

Seven UN rapporteurs wrote a private letter to the Iranian government in September, the contents of which have been confirmed by the UN in Geneva and is only now being made public. The letter detailed that they “are seriously concerned by the alleged continued refusal to disclose the fate and whereabouts” of the victims of the massacre.

They further asked that a “thorough” and “independent” investigation be conducted, as well as “accurate death certificates” be provided to the family members of the deceased.

The UN experts expressed: “We are concerned that the situation may amount to crimes against humanity.” They stated that if Iran continues “to refuse to uphold its obligations” then an independent international investigation will be necessary in order to expose the truth. The MEK has been requesting that the UN Human Rights Council organize such an investigation for many years.

Congratulations on World #HumanRightsDay, heralding an end to the oppression of human kind &violations of their rights. Today is the day to pay tribute to all defenders of human freedom &dignity who have kept aflame human rights in the fight against tyranny. #StandUp4HumanRights pic.twitter.com/srVYwwjyly

The Deputy Director of the Middle East and North Africa for Amnesty International, one of the human rights groups supporting the work of the MEK, Diana Eltahawy, addressed the letter as a “momentous breakthrough” and sends a clear statement that the massacre can “no longer go unaddressed and unpunished.”

The UN’s letter demonstrates support for the tireless efforts of the MEK in their struggle for justice over the 1988 massacre. It is a first step towards ending impunity for the Iranian regime and ensuring accountability for their crimes against humanity. The UN must follow through on its word and ensure that should the regime fail to comply; an international investigation is carried out.

Mrs. Maryam Rajavi the President-elect of the National Council of Resistance of Iran’s (NCRI): The mullahs ruling Iran, particularly Khamenei, Rouhani, Raisi, and many of the ministers and directors of the regime’s Judiciary, Intelligence Ministry, and IRGC were involved in the massacre of political prisoners in 1988 and throughout the 1980s.

The communication by UN official experts on the massacre of political prisoners in #Iran as a “crime against humanity,” which calls for a “thorough and independent investigation” into all cases, culminates the roaring blood of martyrs who adhered to their principles.